Apparently 37,000 people die from lung cancer in the each year, and it is figures like this that have supposedly motivated the government to introduce a smoking ban. It is only recently, seeing my father die, and then seeing ‘non-small cell lung cancer’ going down on his death certificate that I think hang on a minute. Doubtless, because he smoked during his life and because that cause of death has been slapped on his certificate he will become one of those statistics, though 10% of those who develop lung cancer have never smoked, he gave up over a decade ago, and ‘non-small cell lung cancer’ was really a case of ‘select one cause because there ain’t room on the certificate for them all’. But my biggest quibble about all this is that he was 79 and WE ALL HAVE TO DIE OF SOMETHING. The Grim Reaper does not negotiate.

Really, we’re not immortal, we all die, and the process is usually, unless we have the foresight to pack ourselves off to a Swiss clinic, lonely, undignified, uncomfortable and often painful. And these facts are not changed by cutting down on the burgers, booze and fags. In fact, I sometimes wonder if taking the so-called healthy route is a practical guarantee of ending up gaga and wearing nappies in some crappy OAP home, where eventually the usual ‘heart failure’ or ‘dementia’ or ‘cancer of–’ will go down on your certificate, doubtless to be picked up by statisticians then pc idiot politicians as an excuse for again telling us what to do.

A reality, avoided by many, is that cancer rates have increased because nowdays we don’t die of the thousands of maladies we’ve found cures for. These high cancer rates are in fact a victory for medical science.

What I would really like to know is how old were those 37,000. Checking, I see that this form of cancer is rare in those below 40 and from thereon the level rises steadily to peak at ages 70 to 79. Take a look at this graph (from 2003).

Working the figures roughly you’ll see that deaths from lung cancer from ages 40 to 69 about equal the number of deaths from ages 70 to 79 when, really, we should expect to die. As such, that 37,000 is very misleading. Don’t you think that if these deaths are to be laid at the door of the evil cigarette the figure should first have the non-smoking 10% subtracted and then be halved? To put it all even more into perspective, the death rate of 2006 was 10.13 per 1000 people, which works out at a total of 613,971. And yes, they all died of something…
Posted by Neal Asher at 12:50 pm 16 comments: 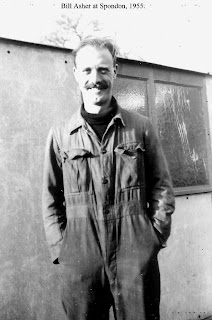 He was a jazz musician, a lecturer in applied mathematics, fly fisherman, one-time RAF pilot and the husband of for 57 years. My mother had heard people say that when someone dies it immediately looks like something is missing. We had difficulty ascertaining that he was dead. I visited him and my mother on the morning of the 15th and noted that he seemed not to be breathing. We were only sure he was dead after turning off the anti-bed-sore mattress and the oxygen, and then by putting a mirror to his mouth and checking pupil response. Later we observed that the only spirit missing from his body was the whisky – something he stopped liking a few weeks before in a surer sign that he was on his way out.

I began making phonecalls and available family descended: my wife Caroline, brothers Martin and (our other brother Bob lives up in so the logistics are more difficult for him) and Martin’s fiance Kath. We let the district nurses know what had happened and they turned up to remove the morphine feed and tidy up a few bits. The doctor came to pronounce death and a little while after that I removed his wedding ring from his hand for my mother. Next came the funeral guys 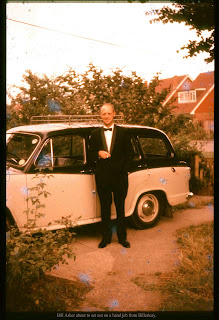 to collect him, and very professional they were. The guy who first came in immediately assessed the situation. There was none of this hand-wringing pretense of deep sorrow. They took him away.

The following day I nipped to the doctor’s to collect a doctor’s certificate which then needed to be taken along to the registrar, along with other documents, so the death certificate could be issued. Interesting contrast in the registrar’s job, only an hour or so before he had been marrying someone.

On dad’s death certificate the registrar put ‘non-small cell lung cancer’, which is rather misleading since he had also had cirrhosis of liver, cancer of the pancreas and quite possibly his bones (died before that could be checked) and the therapies he’d received had supposedly reduced the growth in his lungs. I guess it’s easier to put something like that down rather than ‘trauma of operation to put in a bile-duct stent, trauma of internal bleeding caused by arthritis medicine taken while in a weakened state and the traumas of chemo and radio therapy which were pointless for a man just a few months away from his 80th birthday’. Really, in the days when they used to put ‘old age’ on a death certificate they were closer to the truth. Only an extensive autopsy would bring the truth any closer, and what would be the point of that? 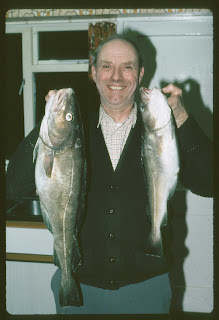 Next Martin, my mother and me went to the funeral home to organize things there. While there my mother belatedly produced his donor card. After some discussion we decided that his liver might have made a handy sieve but his other organs were probably a no-no. The only part of him that might have been of use were his corneas, and for some reason the word had been crossed out on the card. I then pointed out that unless there was some big push on toenail transplants there was not much left of him that would be useful. Really, it is rather a waste if your body goes into the grave labelled ‘Hardly Used – One Careful Owner’. Dad certainly got plenty of mileage out of his. You laugh and you use humour, and you cry. What else is there?

Solicitous enquiries then about flowers, death notices, limousines and a religious service (this last received with a snort of laughter by my brother). All of these were rejected by my mother. My dad is dead, what is left is a well used-up husk that needs to be dealt with. Next Monday he is being buried in a woodland grave without marker, in a cardboard coffin. All the family will then celebrate his life at a wake. One of the guys who collected the body said, “Look back a little; look forward a lot,” which is about right.

I just received this from Jonathan K Stephens: 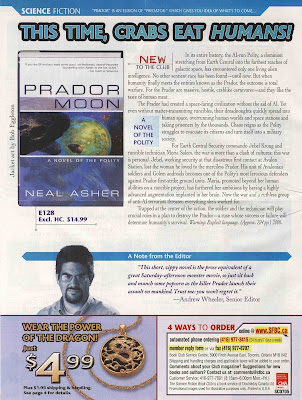 I’ll hand you over to him now:

I've just received the new SF Bookclub catalogue and what do you think I saw? Prador Moon, in a full page spread on the back cover! Great big header "This Time, Crabs Eat Humans". Also nicely blurbed by senior bookclub editor Andrew Wheeler:

"This short, zippy novel is the prose equivalent of a great Saturday-afternoon monster movie, so just sit back and munch some popcorn as the killer Prador launch their assault on mankind. Trust me: you won't regret it."

Well, I need a bit of humour right now. Some of you may remember the one I put up some while ago called Rockfish. This is by the same people. I'm seriously impressed.

Email ThisBlogThis!Share to TwitterShare to FacebookShare to Pinterest
Labels: Film and TV, Funny

Just to keep you guys updated with the situation in the Asherverse: though the writing is going well and I fully intend to supply you all with your fix of outrageously violent and complicated science fiction, things ain’t going that great on a personal level. Over the last year, I’ve entered that town called shitsville, the one we all have to enter at some time or other, in that my father is dying of cancer. It’s in his lungs, liver and pancreas and, with the traumas of frequent visits from paramedics and frequent visits to the hospital, he has been steadily going downhill. Now we have reached the endgame. A hospital bed has been delivered, along with an oxygen supply and liquid morphine, and he’s now ensconced in the music room where he used to practise on his saxophone and clarinet (as well as being a lecturer in applied mathematics he was also a jazz musician too). He now looks like someone straight out of , and is eating less. Dying. That’s all really. Not sure when I’ll be posting here again. Maybe I’ll be doing it lots, maybe I’ll be gone for a while. Bear with me. 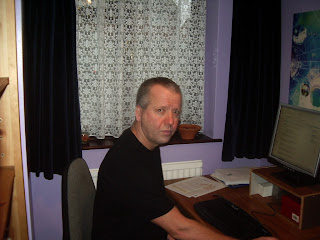 Well, I’m not entirely sure how this sounds … that is, I don’t want to listen to it myself because I know I was talking too fast, I’d had a beer or two, and listening to myself always makes me cringe, but here’s the Dragon Page interview: http://www.dragonpage.com/2007/02/05/cover-to-cover-249/
Posted by Neal Asher at 9:44 am 15 comments: