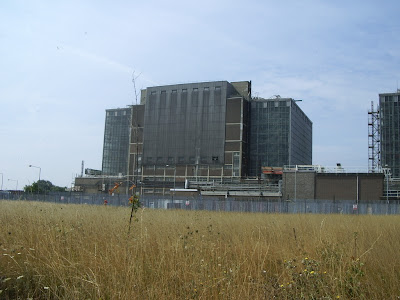 T. B. Liar is apparently going to announce plans for a new generation of nuclear missile submarines but, as far as Trident is concerned, it seems his own party is divided on the issue, which basically means the far left CND pricks are getting all aeriated again. Our Trident missiles aren’t really ours anyway. Every six months or so they go back to America for an oil-change and an MOT and, frankly, I wouldn’t be surprised if the big red button in Number 10 is connected to another in the White House with the label ‘Approve?’ stuck underneath it.

But really, thinking in terms nuclear, hasn’t our Tone got some more pressing concerns? Isn’t it about time he really got his thumb out of his arse and allowed the building of more nuclear power stations? They are apparently a ‘green’ alternative to coal-fired power stations and are supported by James Lovelock, originator of the Gaia theory, who said that “Britain and the world could not reduce carbon dioxide emissions by the 60% scientists see is needed by 2050 without the help of nuclear power.”

But if you take a look at the Friends of the Earth and Greenpeace sites you’ll see that die-hards in those organisations are still looking for reasons to carry on hating anything containing the word ‘nuclear’. Apparently the 'CO2 emissions across the nuclear cycle are about 33% that of fossil-fuel plants.’ This is incredibly vague, and I guarantee doesn’t take into account CO2 production in mining coal and shipping it in from Russia, South Africa and even Australia, since we have so few working mines in this country now. A third also doesn’t seem too bad.

B. Liar, then, seems trapped between the powerful lobby of the green loonies and hard practicalities about the future of this country. But what does he care? He’s preparing to bugger off on well-paid lecture tours of America and leave everything in Brown’s sweaty hands. Or maybe I’m just underestimating the wizard of spin? Maybe he intends to get the nose-ringed greenies all frothing at the mouth about Trident, and safely out of the way protesting up at Faslane submarine base, while he slips through some legislation concerning nuclear power stations?

Interesting side-note here. One of the pictures here is of Bradwell nuclear power station, which is in the process of being decommissioned. At the same time, there were recent plans to build wind turbines in the same area (Dengie peninsular), but the plans were ditched after numerous protests by a group calling itself BATTLE. This group even created a simulation of what the turbines would look like (the other picture here). Similarly, there was talk of recommissioning the power station, and other NIMBYs in the area started writing ‘disgusted’ letters to the paper.

Really, it doesn’t matter what form of power generation is used, anywhere, there will still be some twat there waving a placard.

A little further note. I came across a good description of the usual ‘green’ AGW advocates, which those reading this have probably heard of, but is a new one to me. They are watermelons: green on the outside and red on the inside.
Posted by Neal Asher at 1:27 pm

We used to describe them as Tomatoes, green today, red tomorrow.

Mmm, not sure I agree with that, since the red is always there even when it appears to be green.