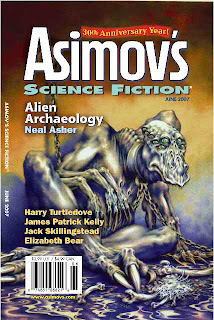 Okay, my story Alien Archaeology is being published in the June 2007 issue of Asimov’s Science Fiction. In that story you’ll find a gabbleduck, as depicted on the cover here, prador and homicidal humans – some of them working for the Polity – and what I hope is a ripsnortingly enjoyable tale. In my opinion Asimov’s is one of the very few magazines that delivers a good proportion of the same (but then I would say that). Get over onto their website and take out a subscription!
Posted by Neal Asher at 3:46 pm

Is that how you see a Gabbleduck, in your minds eye?

Blimey Kirby, I hope you enjoy it!

No, Mark, it isn't, but then the gabbleduck in this particular story has been starved. I see more of a duck bill, eyes something like the multiple eyes of a spider, a domed head. Something like a nighmare by-blow of Buddha and Daffy Duck.

I knew the food was different, with the treacle and the kidneys, but I didn't suspect that they were consumed in an entirely different fashion.

Bugger, my copy-editor has found me.

Correction to be made...

I'll be sure to pick up a copy.

You know, I didn't have the Gabbleduck imagined that way in my head at all. About the only thing that matches up is the size and the bill. I don't know why, but I had this oddly cuddly looking thing conjured in my brain that was deceptively harmless when it really wasn't.

P.S. What is this about snorting ribs? I thought they only did that down on the Paseo in my town.

The good thing about books is that you get to create you own vision of, say, a Gabbleduck.

The bad thing about books is that the first image that pops into your head is usually the one you get stuck with.

My Gabbleduck looks alarmingly like a Dodo. A Dodo that kicks ass, mind.

Murph, for me the bill does not match up, I wanted something more, well, ducklike.