The temperature has climbed in a minor way, hovering at about 12C up here in the mountains and maybe rising as high as 20 down in Makrigialos. It’s still nowhere near where it was last year and my shorts are still confined to a chair in the bedroom. The apotheche door is still jammed shut and I still have no need to divert grey water for the plants here. 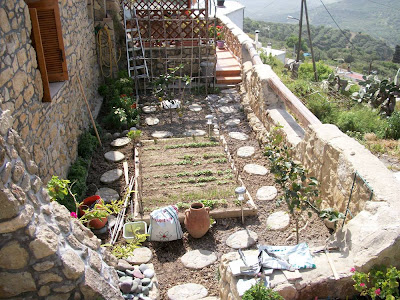 However, on the good news front, the ruin is all but complete. But for the discovery of an unattached pipe for the water tap outside, the plumbing is complete and not leaking. The walls are painted, ceiling and other interior woodwork is varnished and the lights are up. Before we move the bed up there all that’s needed is a shower booth, things like toilet roll and towel holders and a bathroom cabinet. Then we have to get a fridge, a small cooker and other smaller items like waste bins etc. 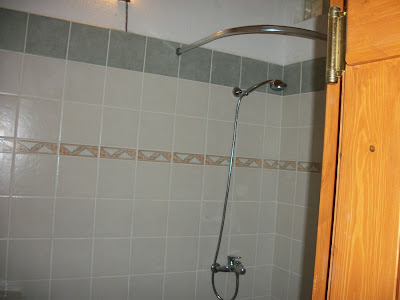 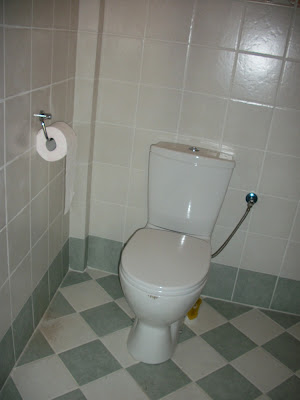 Wednesday April 27th
So many of the programs we pick up on the satellite are platforms for snake-oil salesmen, whether that snake-oil is God or slimming pills or surgery, so I shouldn’t really complain about BBC World. However, those other programs make no claim on balance and integrity. Yesterday we were hit repeatedly with the phrase ‘refugees fleeing the violence in the Middle East’ yet all we got to back this up were interviews with young Tunisian men in railway stations. Now, according to the BBC, freedom and democracy have arrived in Tunisia, the despot has stepped down and all is tea and cucumber sandwiches. What we basically have here, as anywhere the welfare state hasn’t spread its stifling tentacles, is young men looking for work. These ‘refugees from violence’ are actually fleeing the thing that had them chucking rocks at their leaders in the first place: poverty. It’s the economy, stupid. Of course there doubtless are refugees from the violence in Libya out there, but they’re probably a bit far from the hotel bar for our intrepid BBC correspondents. 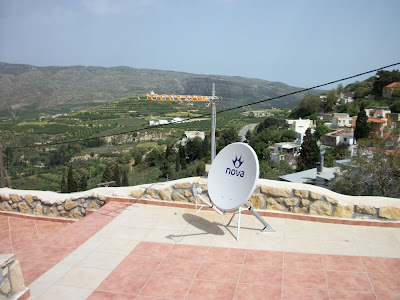 Ah, now that’s more like it. We went up to Handras and then Ziros to celebrate someone’s birthday and in a kafenion were put in contact with a guy selling a nice rose wine for €1 a litre. We bought five litres and will doubtless be seeing him again – he’s not going to be running out any time soon since he has 25,000 litres on tap...

We had more pissing rain last night, and there’s still no sign of the promised global warming. We’ve ordered another two tonnes of wood for the stove, which will maybe turn up today. I’m hoping we won’t get to use much of it this ‘spring’ and can save it for next autumn and the start of winter. But it seems that every time it’s looking like it’s warming up, another shitload of cloud comes over the horizon and the temperature drops.

Monday May 2nd
I moved the bed and some other bits and pieces up into the ‘ruin’ over the weekend (the words ‘the ruin’ have stuck despite it being cleaner, drier and newer than the main house) and can now concentrate on other work. Having cleaned out the spare room I bleached the mould on the walls and ceiling, treated and varnished the beams and used up the remainder of the paint on the walls. I’ve also been varnishing the pergola and generally working on other stuff until completely knackered. The weather is still crappy – cloudy, damp and cold – though things are looking better this morning. During the royal wedding, when I intended to go fishing with ‘the boys’ whilst Caroline watched the wedding with ‘the girls’, it absolutely chucked it down, so I ended up drinking far too much wine. 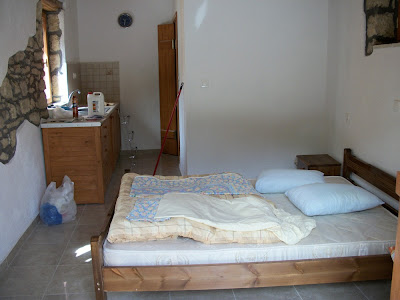 We’ve just seen on the news that Osama Bin Laden has been killed. Perhaps it is a good thing to have access to BBC World, since when Michael Jackson died we didn’t find out about it until about three weeks afterwards. Then again, does knowing these things make any difference to us at all?

The cynic in me immediately wondered what news was being covered up by this, that maybe the killing of Gadaffi’s family was something the powers that be wanted kept low key, but, just maybe, the announcement was being held over until after the wedding. Anyway, this is a good media victory for America and has reduced the number of murderous people-hating psychos by at least one.

Wednesday May 4th
I’ve just received an uncorrected proof copy of The Departure (thanks Julie) and here, for your delectation, is a picture of what you can’t have until September... 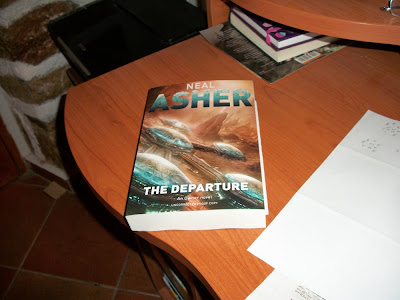 The temperature is climbing. This morning at 10.40 it is over 20C – the first time it has risen so high since we’ve been here. I’m actually contemplating putting on my shorts and venturing outdoors.

Meanwhile, I was going to post a picture of Makrigialos beach for Chris (Dutch physics teacher) showing how much the sea level has dropped here. However, the one time I remember to bring my camera down the sea is back where it was before.
Posted by Neal Asher at 11:36 am

Wednesday the 4th of may? You allright? It's tuesday the third of may out here......thanks for trying to take a pic of the seafront though :)

My God the cold and cloudy have invaded South Texas too! For the previous 3 weeks we have been seeing temps from 25 to 30+ and now this morning it was 10 when I left for work and it might be 17 now. This is unprecedented! By the way we could use some of your pissing down rain.

I think you should have one of those blue plaques in your toilet, you know, the ones declaring 'someone famous was here...'

I have something in mind:

Neal Asher, SF Visionary sat here (or you could always insert a H into sat to be controversial) :P

Finished and enjoyed The Technician btw, I'll blog about it in time but best to review someone else first or it will only look like favouritism :)