After today’s Internet sessions we spotted the boat pictured sitting out on Makrigialos bay. Much was the idle speculation about who might own something like this, it certainly costing somewhere in the millions. Could it be Greek government officials cruising around Crete trying to figure out a way to tax the waves? Was it one of those Athens’ doctors with submitted earnings of less than €20,000, but palatial homes and one acre swimming pools? I noted that it probably belonged to a Greek politician and then, checking through binoculars, realized it must belong to a politician with a deep sense of irony. The boat is called ‘Integrity’. 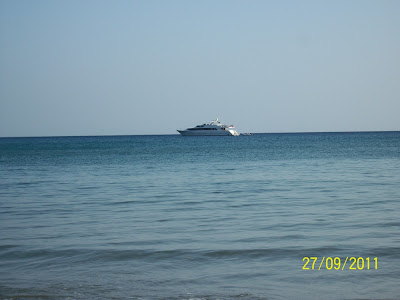 Wednesday 28th September
There are more huge moths knocking about, almost certainly attracted by the scent of that night flower outside. This one was in our hall. I didn’t manage to put a ruler up against it before it took off, but it was about two inches long: 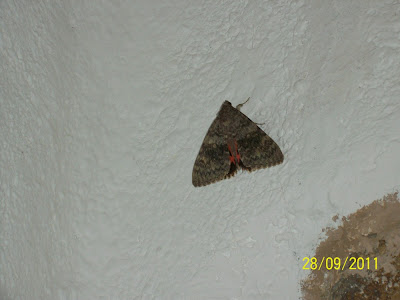 Thursday 29th September
I’ve just seen a news story about a Spanish town whose council is about bankrupt. A local garage owner is owed €40,000 for fuel by them, policemen are now on foot, mobile phones off and numerous state workers haven’t been paid for months. The mayor of the town said they need extra cash immediately and went on to bemoan how they must ‘cut all but essential spending’. There we go, he’s a cipher for all those governments now faced with debt: first they want more money to spend, and only as an afterthought consider cutting all but ‘essential spending’. Well maybe if they’d not pissed all our money up the wall in the first place on non-essential spending...

Monday 3rd October
Well, with a surge of writing on Thursday I had the satisfaction of writing THE END for Jupiter War, or The Jupiter Conflict, or The Jupiter Incident. I still have a lot to do what with the addition of a couple of sections and my chapter starts, an alteration throughout to a certain character’s attitude, and I also need to read up on some of the science when I have permanent Internet access in a month’s time.

It’s got cold enough for us to have the stove on for a couple of days. I note that as seems to be par-for-the-course on Crete (in the mountains in Eastern Crete) in the spring and the autumn that while the temperature here has dropped the temperature in Britain has leapt up. While you’ve been enjoying 25 upwards it’s been hovering around 20 during the day here and below that during the night. 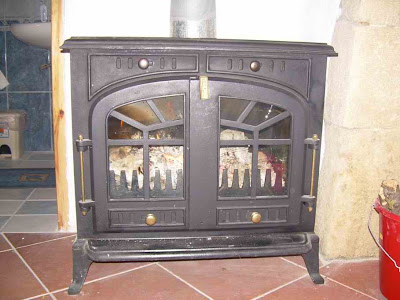 There’s a machine with a great big cutting wheel which, over the last few years, we’ve observed working its way along roads of the island cutting a narrow trench to take a cable. At the start of this year it was between Irapetra and Makrigialos. Now it’s past the village of Lithines and more than halfway from Makrigialos to us, and will continue on to Sitia. I’m told this is fibre-optic for cable TV and Internet, but whether there’ll be a spur into our village I don’t know (we only have 60 or so people here and I doubt many of them want or can afford Internet), but I’m keeping my fingers crossed.

Tuesday 4th October
Interesting, I exchanged a few words with the neighbour’s boy this morning. Since school has started here I asked him, ‘Oshi skolio?’ (no school) to which he agreed. I went on to ask ‘Mono tholia tora?’ (only work now) to which he also cheerfully agreed. I found this surprising because I’m fairly certain he’s no more than fourteen. Certain questions occur: What is the law is here in that respect? Can parents take their kids out of school early? Has he been taken out because the family simply needs him to get to work? Are kids being sent home because of a lack of funds to educate them? Could it be that the family simply cannot afford the bus fair to send this kid to Sitia every day?

I remember the school age being raised from 15 to 16 when I was a kid (and how annoyed I was about that since I wanted out of that hell-hole) but I wonder how many years before that it was raised from 14 to 15? When, in fact, did school become compulsory? When I was there many of us would have benefitted from leaving early. My real education began when I drove my moped out of those school gates and buggered off to work. However, that might have been because of how completely fucked-up our comprehensive school system was at the time.

Wow, we’ve been thinking, this summer seemed to zoom by. How can it now be October? How can it be that we are now putting on the stove and contemplating our return to England? Well, I have a theory about that (and it almost certainly isn’t a new one). I just made cups of coffee for me and Caroline. This is something I’ve done thousands of times before but, of course, I cannot remember every occasion. My long-term memory just retains a general file we can call ‘making coffee in Crete’ while my short-term memory either discards the most recent example of it, or doesn’t bother to record it at all. (This last is just like on those occasions we’ve all experienced when we arrive at work and just don’t remember the journey at all, or when we have that moment of panic about turning off the cooker, but always have.)

I’d also submit that because every occasion of ‘making coffee in Crete’ is not added to my long-term memory, the time stamp isn’t either, so my perception of the day is shortened by the few minutes it took me to make that coffee. Time seems to pass more swiftly as we get older because, as we get older, we have done more and thus there is more unrecorded repetition in our lives. Therefore, if we want to slow down our perceived passage of time, we need to do different stuff, learn new things and break entrenched patterns of behaviour. This is also why many older people tend to have an inability to change, absorb new ideas or think out of the box – the repetition leads to hard-wiring.
Posted by Neal Asher at 11:21 am

Okay, fofr clarification of that title: the Greek word for stove, to the English ear, is sombre.

'Therefore, if we want to slow down our perceived passage of time, we need to do different stuff, learn new things and break entrenched patterns of behaviour' True ofcourse (and that is why if one drives somewhere for the first time the way there seems always longer than the way back) but it also depends on how much attention we pay to the repetative things we are doing all the time, there is no need for our brain to stay around when we are for example brushing our teeth,'been there, done that' so our mind wonders of to yesterday (I should have said that!) or tomorrow (I will them them so!)So in fact we are not present at all or as some people prefer to say: we are deeply asleep. I find it very fruitful to try to keep my attention with the thing I am doing at the very moment even if it is something like cleaning the toilet....and from personal experience I must say that it works, time is being stretched out when one is more awake and more aware of what is actually going on right NOW...and another observation is that life gets more quality once one is more 'awake'......

Neal I'm thinking of coming out to MKG again to cool off
Love your blog gives realistic happy memories of our visits over the last seven years.
I'm researching your moths using Natural History website and will blog when I get a result
Dave Tickell Teignmouth
alias dittydebbun

Of the proposed titles for the next book I still really like Jupiter War.

That last paragraph or so on time passing is a gem. Thanks for nailing that.

I thought that time passed faster as you aged because a unit of time is proportionally much less of your life than when you were younger.

Jupiter engagement, Jovian War, World War Jupiter was what I could come up with, although Jupiter War is solid enough I think.

When in doubt, simply usually wins.

It's still 27-28 here in Malta, so no need for heating yet, but we're getting there I guess.

Chrish, this is why learning a language is so good - everything you do takes on a new twist as you try out the new words: katharizis touletta!

Cheers Dave - let me know what that bugger is.

Jay, yeah, I'm leaning back that way myself now.

thylaxene, and it gets more important as you get older!