Okay, getting things in order. Over here on the Tor blog (that’s Tor Macmillan not Tor US) there’s a survey about my books, about what you like best, and some prizes to be won including my entire back catalogue and some signed artwork.

Penny Royal II now stands at 22,152 words and it’s been 22 days since I started on it. Obviously this averages out at 1,000 words a day but then three weekends have to be subtracted, two days spent on the short story The Other Gun, a day picking up relatives from Iraklion and a day spent on interviews and other ephemera, so 12 days, which gives me an average of 1846, so just a spit away from the word count I aim for. Working on that basis this means I should have the book done by about Christmas then, all being well, a third one done well before it’s time for me to deliver the first of the three. Well, that’s the plan anyhow.

Friday 10th August
Damn, what happened this morning? I woke up at around about 5.00 and couldn’t get back to sleep so got up at 6.00. I took a shower and then went outside to bucket the shower water onto my plants and, seeing Dean and Samantha up and about, went into a state of shock. These two generally aren’t stirring from their pit until gone 9.00 or 10.00. Now even Caroline is up and about. Perhaps it’s the wind, or rather the lack of it. It had a few more rebellious blasts yesterday morning and then died and this morning it’s gone. So we’re no longer hearing that but instead the steadily growing din of the cicadas.

Moving on to the ‘where are they now’ section ... familiar faces are missing from the beach this year... 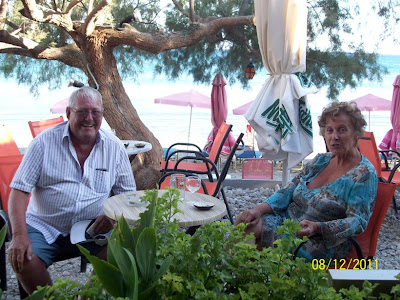 Monday 13th August
So, with it getting to hot to dance to the Wii a couple of months ago, with one record resulting in me dripping like I’d just got out of the shower and skating on sweat, I had to give that up. However, the increase in temperature meant the sea becoming warm enough for me to get into without my balls trying to retreat into my torso, so I changed my exercise routine. I took my first ‘harbour swim’ in June (I think someone measured it on Google Maps at about a quarter to half a mile) and was pleased to manage it without the rests I took when starting swimming the year before, but was still thoroughly knackered. In the picture it’s from where I’m standing to that line of rocks to the right of the harbour mouth. 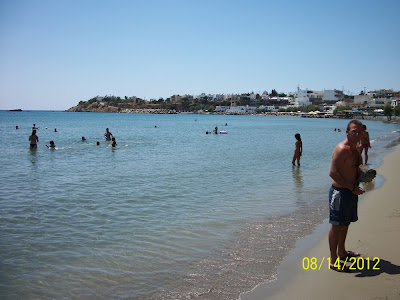 By July it was getting easier and now it is getting almost too easy, so I’m not swimming straight back from the harbour but doing partial or full circuits of the buoys that mark the point beyond which I might get run over by a jet ski. 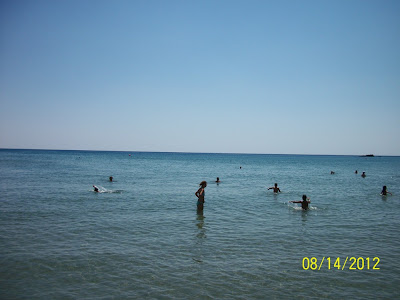 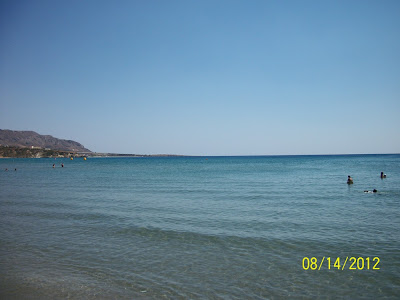 And still it’s not damned well enough to stop my stomach from sticking out.

And on a final note, bar work can be dangerous, especially when you catch a broken glass on the way to the floor, Kostis: 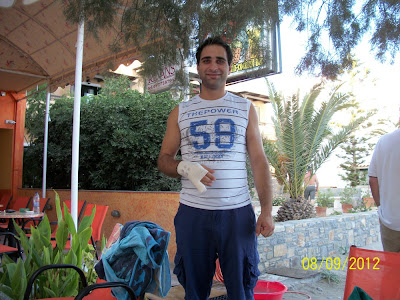 Just started reading Zero Point. 8 Billion dead by page 40 was it. Not bad.

Unhappy about you nuking Sharm El Shiek though as it was a great holiday.

Good news on the new books, can you do a signing when your back at FP?

Loved Zero Point, weapons grade Sci-Fi and no messing. Nice to see the bed-wetters that populated Amazon have not re-surfaced...probably off reading 69 Shades of Crap or something.

Thanks for getting the new book out so quick, can't believe you have PennyRoyal in the bag already, you really are motoring!

You could always try a reverse crunch. Lay on your back bring your knees and up towards your chest. I find it best to do them on the bed as it aids the rocking up of the knees; you just don't get the same rhythm if you're on a hard surface ... it tends to hit the sides of your abs more than the core ... but if like me you're getting on a bit then it's probably better than a sit up as the lumbar impact is reduced. You could also do some upper body building work (press ups and reverses dips) the increase in muscle bulk on the upper body will offset the the paunch effect ... I tell myself.

Hi Neal and Caroline
Yes we missed being at Revans this year "so far" but watch this space.
I must get rid of that shirt though it makes me look so overweight!
Burst Central heating under concrete floor was the stay at home factor but hopefully I will get it all done soon.
David & Lesley