I picked up an Adrian Tchaikovsky book before (Empire in Black and Gold), recollect enjoying what I read of it, but it unfortunately fell during a time when some shitty things were happening in my life and I lost my reading mojo. Now I’ve read Children of Time and am considering going back to take a look at those Shadows of the Apt books. 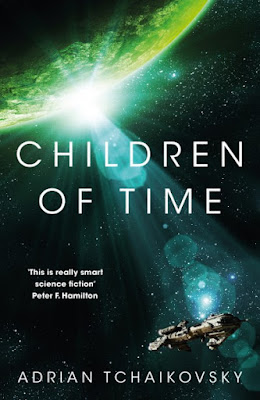 If any book appears here it is because I finished it, so right away it is to me an enjoyable book. Life is too short for anything else and anything that doesn’t make the grade after a few chapters ends up in the charity shop bag. In fact that usually happens after just a few pages. This one made the grade in spades.

Two story threads weave the whole together with on the one hand the travails of the survivors of the human race travelling out in an arc ship to find the remains of a previous old empire, and on the other an uplift project (the space station concerned of course being called the Brin) – the terraforming of a world and the placement of a ‘barrel of monkeys’ there to rise to civilization. The driver of this is a nano-virus that accelerates evolution by dint of making acquired abilities heritable. This is overseen by Doctor Avrana Kern who, to survive during a rebellion in that old empire, becomes an amalgam of an upload of herself, her cold coffin body and the computer system of the satellite she occupies. The project goes wrong, and what rises to intelligence and civilization is somewhat unexpected. Okay, that’s enough, since I don’t want to give the plot away.

This being a doorstep of a book I had my doubts about whether I could stick with it, but over 600 pages of science fiction goodness I enjoyed myself immensely. The rise of the ‘alien’ race parallels (and nicely diverges from) the rise of humanity and the world-building there is excellent. I did get an ‘oh shit’ moment with the battle of the sexes turned on its head (but for perfectly understandable biological reasons) but fortunately it didn’t lapse into proselytizing on gender politics as seems par for the course elsewhere. The thread aboard the arc ship kept my nose in the book too – at no point did I think ‘Nah, move along’. I cared about the characters there and on the terraformed world.

Thanks for the review! It is hard to find the good books with all the new publishing going on...

Excellent, review, just enough detail to help me decide. It's on my list now!

Adrian is now one of my authors to keep an eye on, loved this book as my first taste and looking forward to the sequel that is out in Q1 2019. I would also recommend Dogs of War by the same author as a excellent look too.

Thanks, Neal. I've had a copy kicking around in my kindle for over a year, but always seem to find something else to read first. Like what I've read of the Apt series so far, great characters and good world-building.

Patfin said...
This comment has been removed by the author.
5:58 pm

Yeah, Neal, this is a great book and is a SF novel that deserved the award wins.