Return to Crete (Part One)

Here I am again on Crete after two years and nine months. I initially left for two reasons – one is under a NDA and the other personal – and I stayed away for personal reasons too. I have already detailed all this, but in my journal. I won’t be writing about it here because I don’t know you well enough! 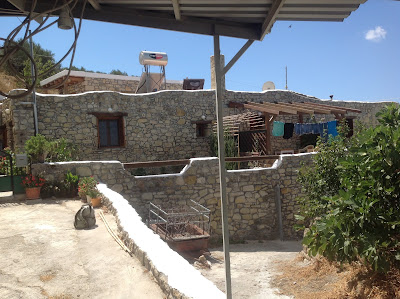 Knowing I was returning, I kept an eye on Facebook posts from people I know here and from some other local feeds. This last winter here has been one of the worst for a long time. They had so much rain even the Greeks were saying, ‘Enough now,’ and they usually wish for it to top up the ground water supply and because, well, it’s not that common and they haven’t acquired the English detestation of it. I heard about floods, roads washed away and landslides and watched videos of these. Riverbeds, which had been dry for a long time, abruptly ceased to be, washing down masses of bamboo and sweeping it out to sea, which then kindly heaped it up on the beaches and all along the coast. A hotel here called Villea Village was devastated with rooms filled with mud. I noted the usual cries of, ‘This has never happened before!’ and, ‘Oh my god the climate!’ Complete nonsense of course. That there are riverbeds here kinda indicates that they have in the past had rivers. Also, the hotel I mentioned was built right next to one of these whose local village behind by the same bed is called Aspro Potamus, which translates as White River. There’s a clue there. . .

Makrigialos where I go to swim and kayak had a couple of roads taken out, many properties flooded and that bamboo heaped on the beaches. Sitia, on the other side of the island, where I go shopping, was seriously flooded and pictures of it looked like those you see from third world countries in the monsoons. I heard that my village up in the mountains, between these two, was inaccessible due to landslides. I half expected to return to find my house in a pile of rubble at the bottom of the village or to open the door and have to wade inside, or shovel out mud.

During the drive from the airport I saw signs of the damage in Makrigialos, but the roads had been repaired and the beaches cleared of bamboo. When I finally arrived at my house and walked inside my fears proved groundless. Water, of course, runs downhill and my house is 700 metres above sea level. The only evidence of the heavy rain was in my bedroom. When Caroline and I first came here, we stayed one winter and, on New Year’s Eve, it rained for 10 hours straight. We were away celebrating and when we returned it was to find water pouring through at the base of the back wall and making a small waterfall over the step into the kitchen. This is because that wall is underground. I sealed it all as best I could and now there’s a patio area on the ground up there, but the water did get through this winter. However, all I needed to do was put a couple of wet mats outside to dry and later repaint the wall. This house was initially built of stone cemented together with mud and still has mud in the walls. This had soaked through and stained the paintwork. 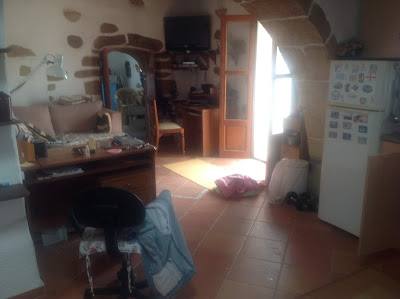 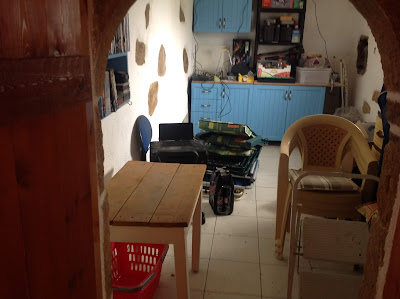 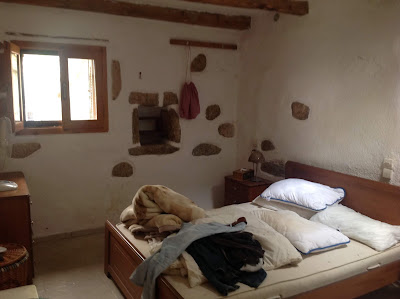 The most damage I found inside was from local wildlife. Rats had got into the wastewater pipe, flipped up the little chrome drain cover in the bathroom, and come to stay. Their dry shits were everywhere with patches of dried out pee scattered throughout, but the most damage they had done was to chew a duvet cover and a few other items. Their other leavings weren’t really much of a problem since I needed to clean every surface anyway and launder every fabric I could. 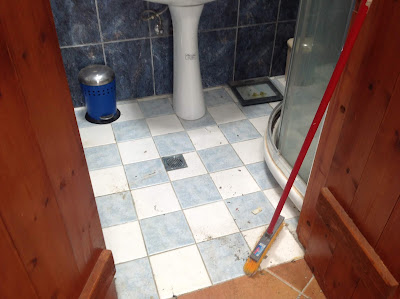 I spent the first evening after travel just cleaning and running the washing machine. I slept in a mould smelling bed (no choice – no bedding clean or dry yet) and woke up with my eyes streaming and swelling from an allergic reaction – soon dispensed with using eye drops and an antihistamine. Over the next two days I cleaned throughout while running the washing machine perpetually. I didn’t bother getting any food in and instead headed down to the Gabbiano Restaurant and filled up there. Other snacks included packets of Cheetohs that were three years old, sardines and friganes (dry toasts also three years old). With everything bar the painting done inside I turned to attention outside. 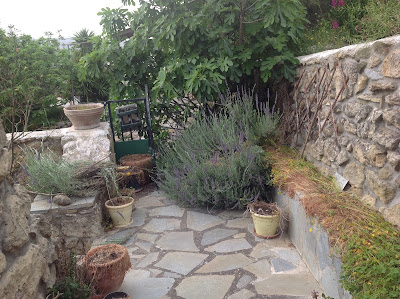 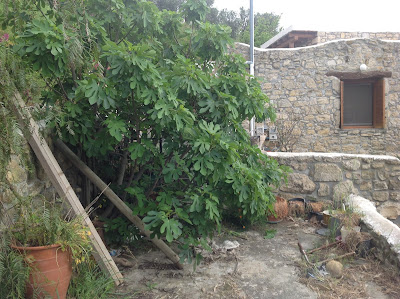 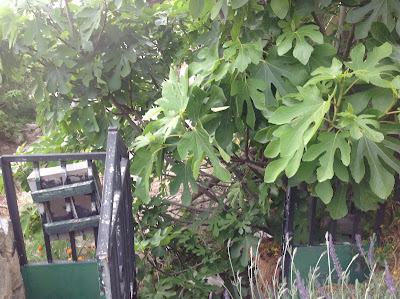 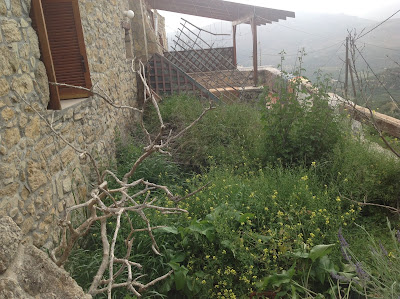 Everything in pots was dead, the garden overgrown, while a structure I had built out of metal rose arches from Lidl bound together with bamboo and wire and up which I had been growing rosemary, had been taken by the wind a year before and deposited across the garden. Weeding therefore involved dismantling this thing as I went along. I cleaned up the garden and surrounding area and dug it over (with a mattock since impossible with a fork here). I then repaired a trellis that had been ripped from the side of the pergola and set about treating all the woodwork of the windows, doors and shutters. While doing this I found the ‘skolichi’ or woodworm had been busy. I had to cut out and replace a chunk at the bottom of one shutter and inset a piece of wood in one leg of the pergola. 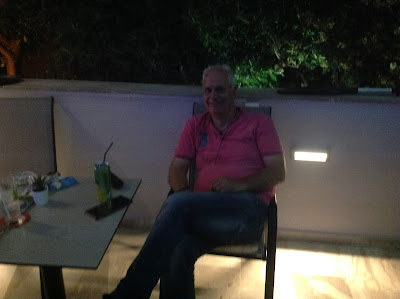 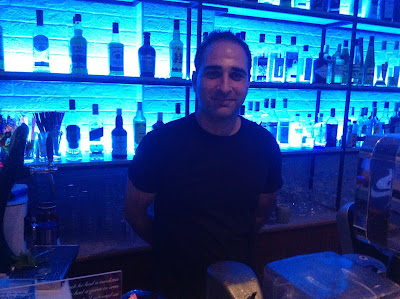 Shopping next. I finally got some food and other needed items into the house. I also bought young lettuce plants and seed onions that I put in immediately. I ventured down to my favoured bar and was happy to see Yorgos and Kostis, had a coffee and headed away again. Still too cold for swimming and my kayak wasn’t there. I learned that Yorgos had put it in storage and would bring it out again once I was ready. But I still had work to do at the house and first I wanted to get back to walking in the mountains. 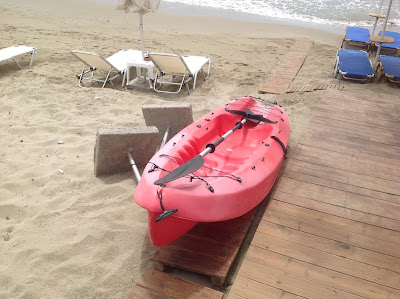 My first walk was hard. The seven mile walks I was doing occasionally in Essex simply do not compare. In fact, physically, I am much more active here in every way. There are more steps and slopes, and all the jobs outside. The rubbish here is not collected from the house but goes in a bin that is some way down the road beside the village. If I only shop at Lidl that’s similar to a shlep to the supermarket in the UK, but often I have to go into the town for things, and for a frappe, and for the joy of walking around in the sunshine. Already, with all this and the work I was doing, I was experiencing all sorts of aches and pains and finding it difficult to stay awake beyond 10 in the evening. 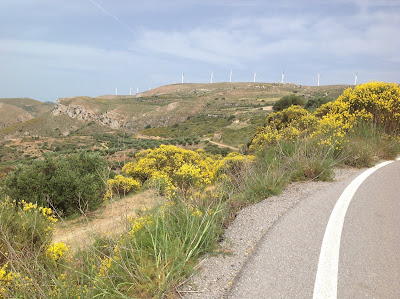 I decided right away to go on the long walk: to Voila (pronounced Voyla). One day I am going to write a book called ‘Walking to Voila’ covering my experiences here, the death of Caroline, the after-effects of that and much else beside. One day. Voila is a place I first walked to when fighting depression here. I felt pretty crappy one day and decided to walk until I felt better or dropped. Now I don’t believe in supernatural stuff, however, after crossing the mountains and heading out on some roads, the walking had its positive effect on me and reaching a junction I stopped and decided it time to head back. There I looked down and in the white line at the side of the road, in black lettering, were the words ‘Never Stop writing’. I think they were done with a stencil and had something to do with those who paint the lines? I don’t know. But those were some of the last words Caroline spoke to me before she died. 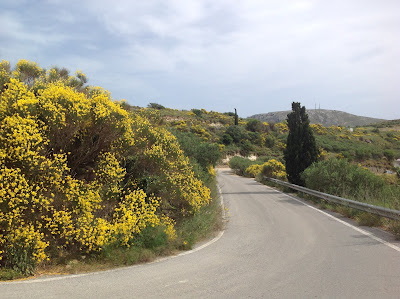 This walk entails a track with one steep slope and I felt that in my calves immediately. Next comes a slope up to the top of a mountain where wind turbines stand. This slope is over 45 degrees in places – the track concreted to stop it sliding away. It pleased me that though walking slowly I didn’t stop. I would put it as akin to walking up about twenty staircases. Euphoria hit after that on the top of the mountain and I shouted something about being ‘Back in Kriti!’ I completed the walk – past the ruins of Voila (a Turkish settlement with its ‘Tower of Tzen Ali), through the village of Handras, round a track to the village of Armeni, through that then back across the mountains past Agios Georgos to home. In all about 8 miles. Midday I slept for about three hours. I then went to bed at about 9PM and slept for a further nine hours. But thereafter I walked to Voila just about every day.

Damn you were busy. Best not let my wife find your post, she will expect me to up my game.

The rat 🐁 entry point has been dealt with?

I thought you dug out all around the house, years back to create a drain away?

Glad to see you back and getting sorted, just back from crete after 32yes break, didn't recognise much other than the airport which is still crap.

Glad to see you are staying active.

I have been awaiting your triumphant return to Crete. Surely some creativity will get flowing I am sure. Attacking the AI's by screwing up their time synchronization (an Achilles heel if ever there was one) perhaps. Who knows. But more importantly your inner muse as you write your own story.

Hopefully this NDA includes Netflix or Amazon... but I swear if they butcher your work like Love Death + Robots did to "Beyond the Aquila Rift" I will be pissed!