This Wednesday’s walk was Pervolakia Gorge (my map has it as Perivolakia, but everyone pronounces it the first way). This was a shorter walk and we were setting out later at 9.00 AM so it was going to be easier, right? It was much shorter than last week’s walk so should have been a doddle, right? This was my thinking as we arrived at Kapsa monastery. 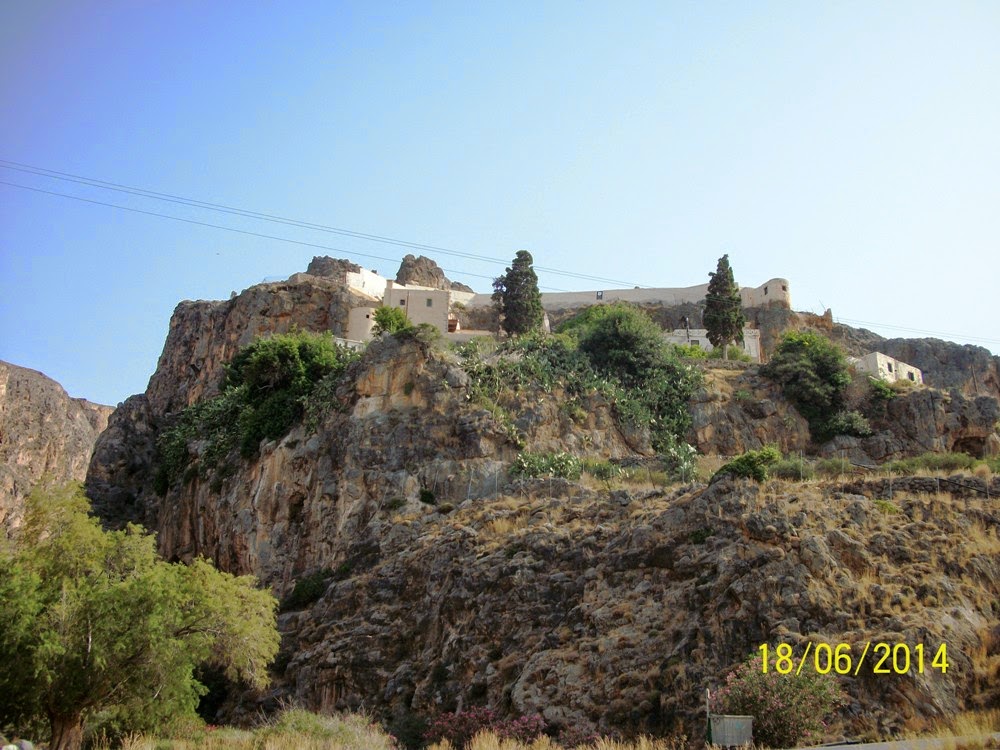 It was hot right from the start as Chris (The Rock Bar), Mark, Kostas and I set out (this picture is a later 'selfie' from Kostas). 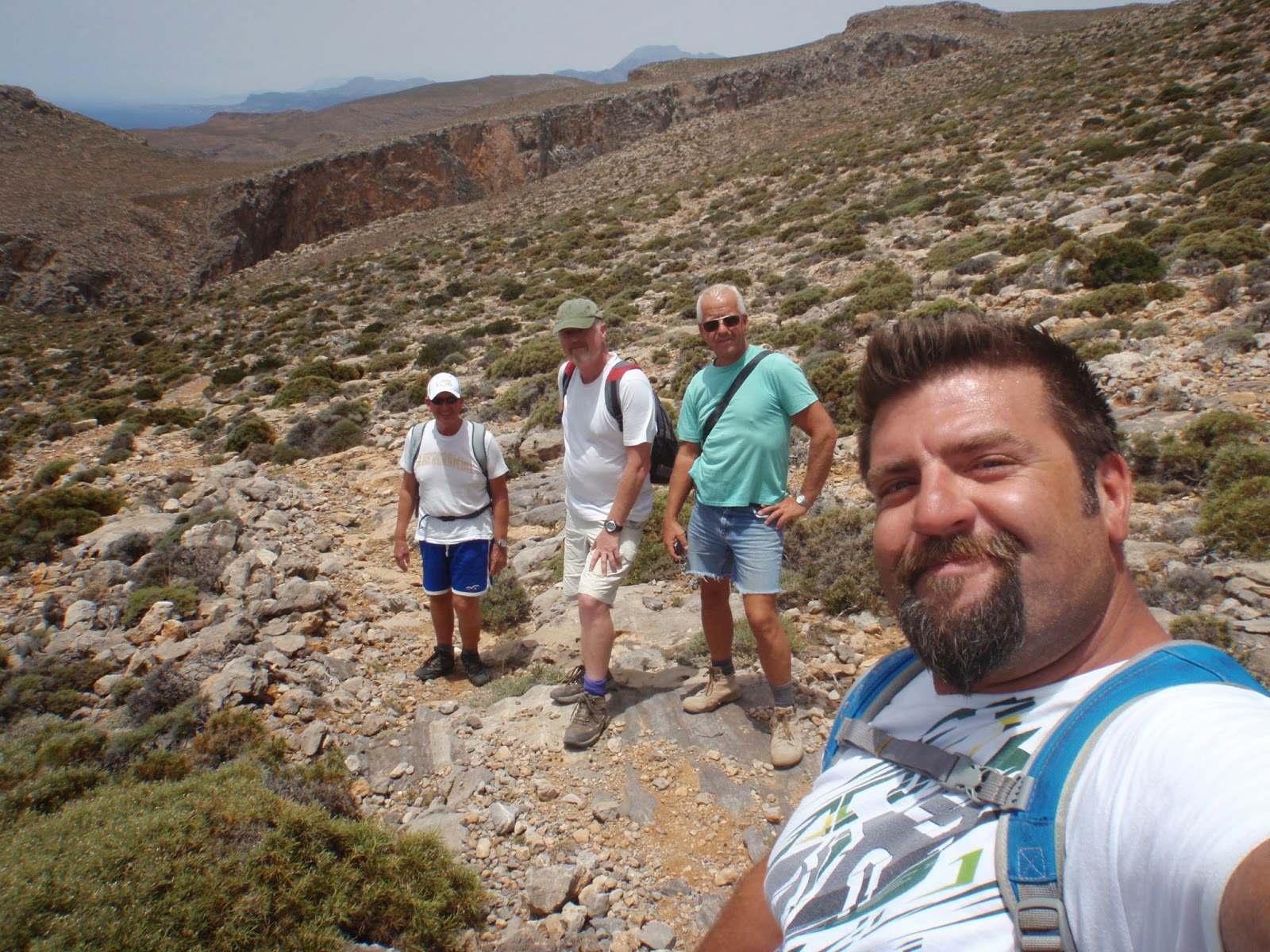 Consider walking up 3.5 miles of staircases, with some occasional easier bits where you aren’t watching your own sweat drip on the rocks. About halfway up my T-shirt was dripping and this time I really did need the water I’d brought along. And most of this route was in the shade. 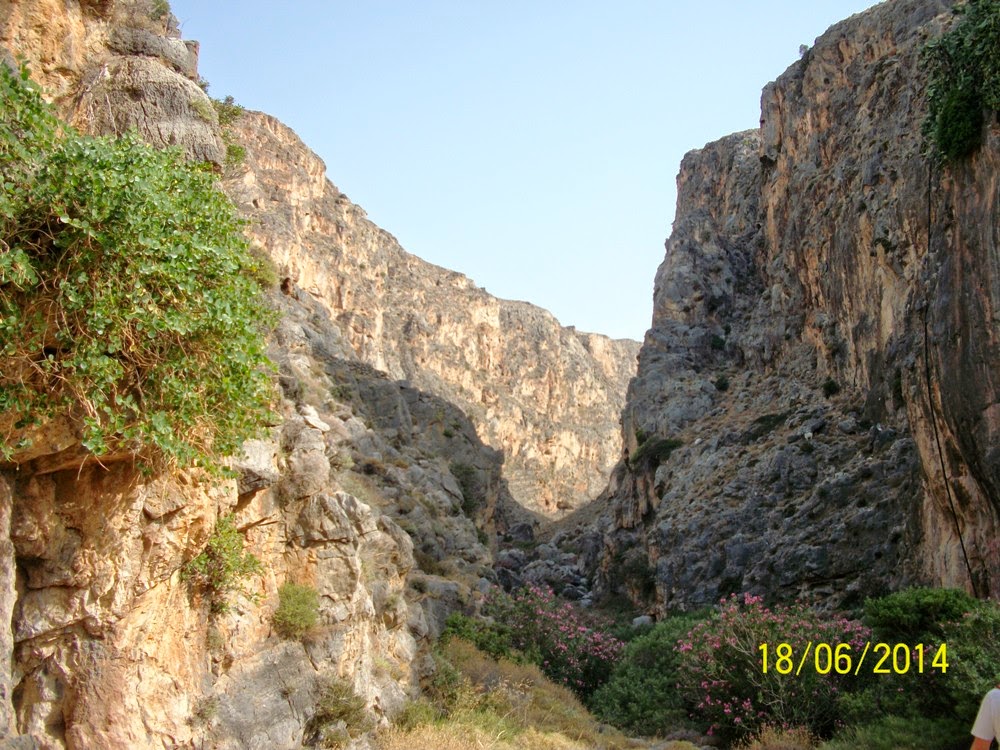 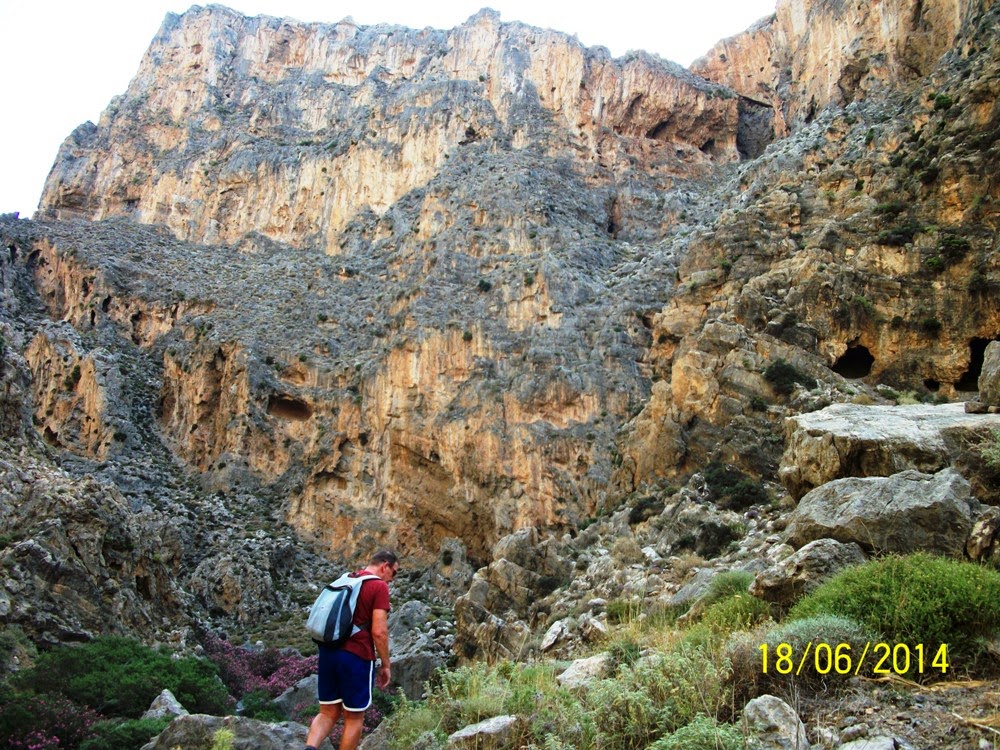 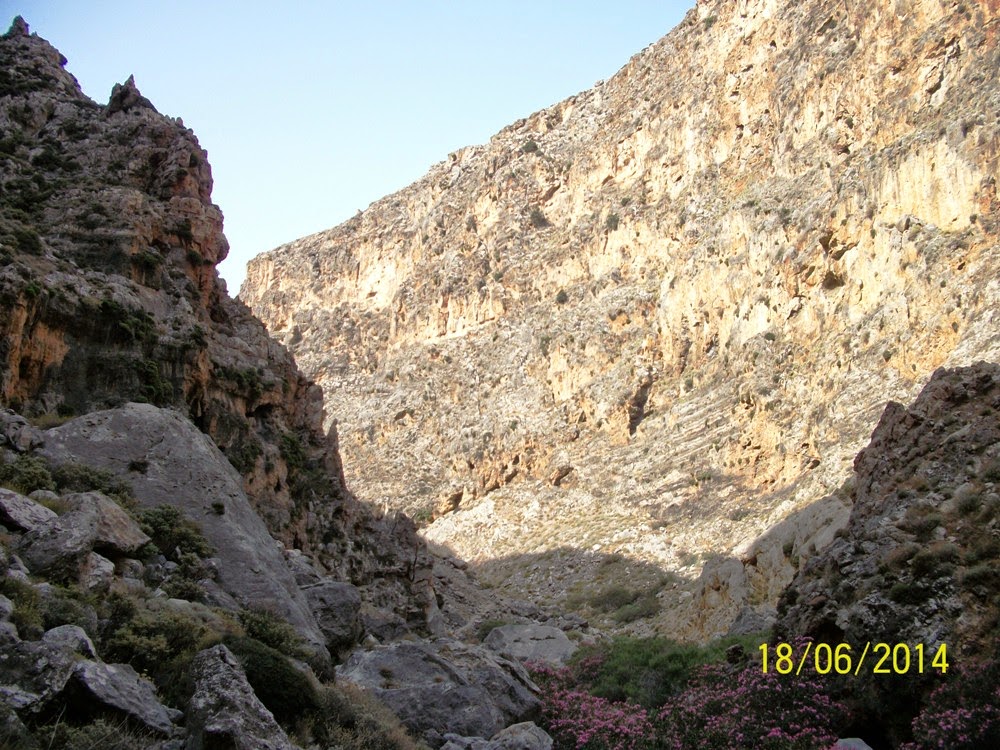 Kostas is a Greek guy who, later on during this walk, acquired the title ‘Mad Dog’ because, of course, only mad dogs and Englishmen go out in the midday sun. This name is appropriate in so many ways. It describes someone who climbs up mountain paths, which most people would find difficult simply walking, so he can rake them clear for his mountain bike. There were odd instances when Kostas got out of breath during this walk – I could tell because he occasionally stopped talking! 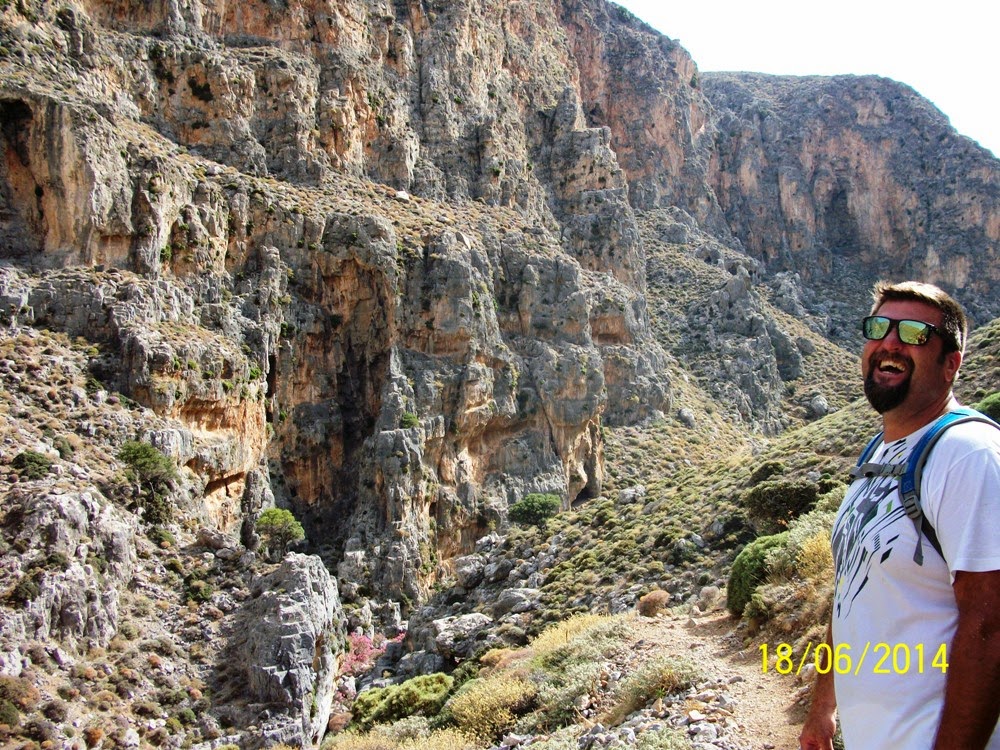 For those of you who might feel inclined to indulge in some of the ideas we discussed, like para-cycling or throwing yourself in a flight suit off of a Pervolakia cliff and leaving you mark there, probably as a splatter on another cliff, Kostas can be found here, the apartments he runs below.

Yet again the scenery was superb. I can ramble on about it but these pictures tell that story, and as always they don’t quite capture the scale. Kostas immediately adopted my use of the word ‘glorious’ here. 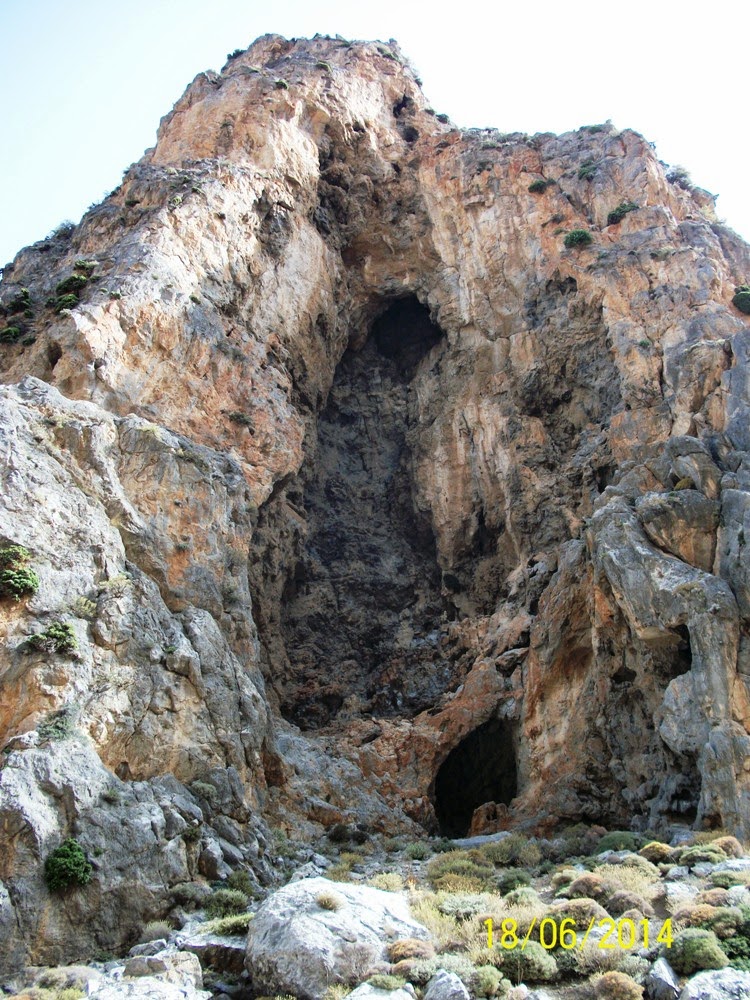 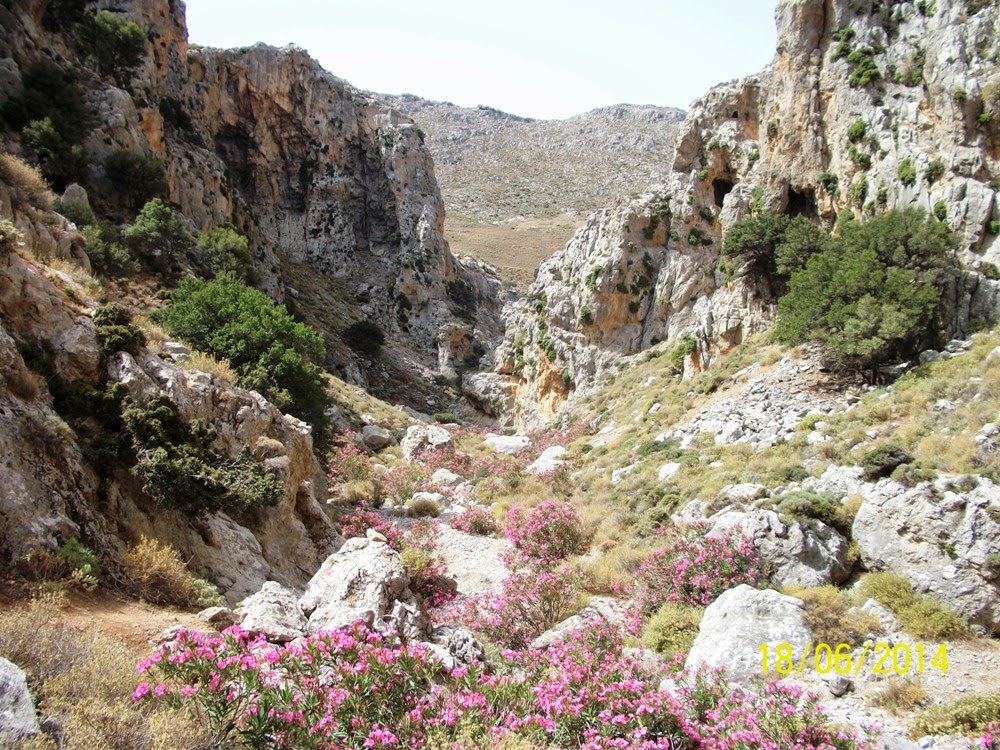 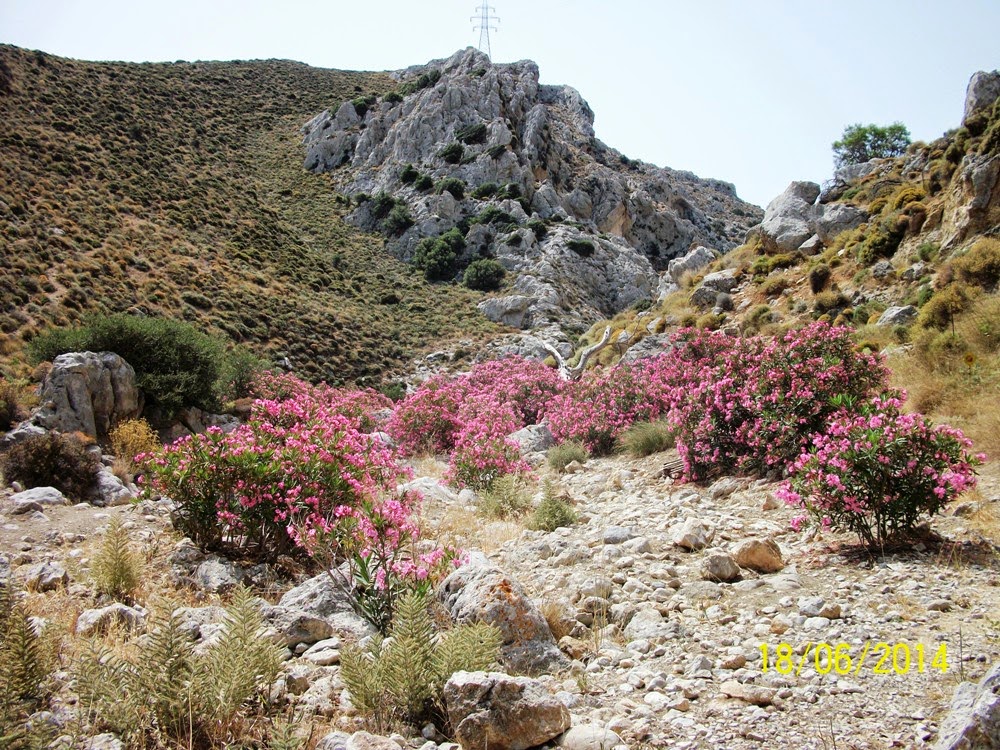 Mark, meanwhile, true to his name, dryly informed us of our present elevation or how many kilometres we had to go, usually when we were sweating up some steep slope. 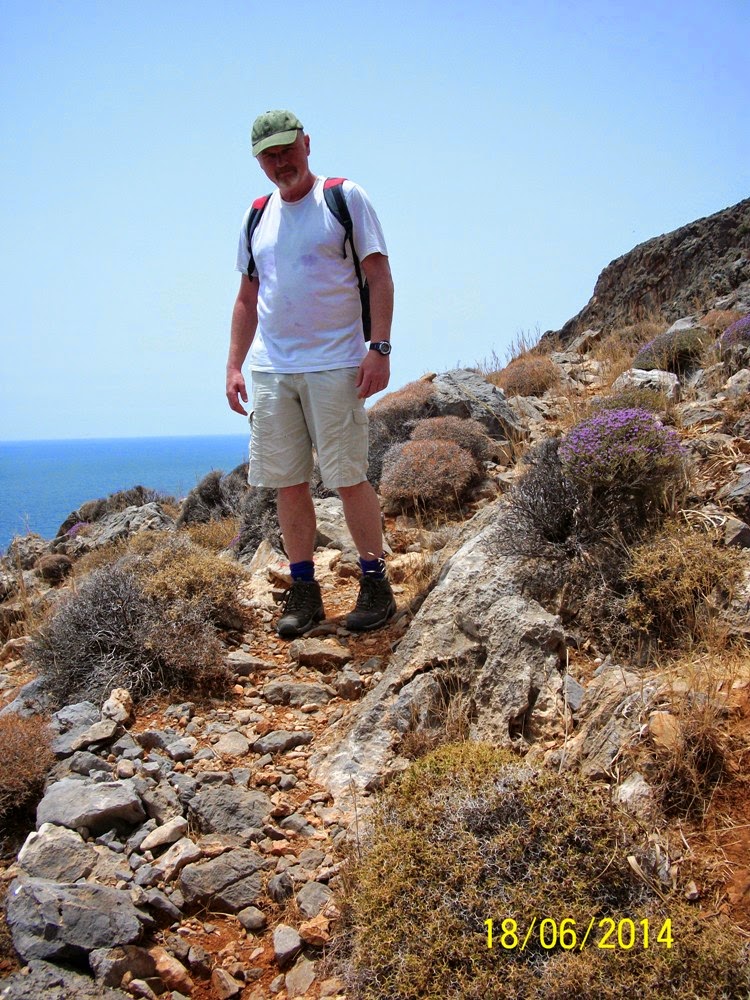 At the top of the gorge we stopped off in the village of Pervolaki for the obligatory beers and mezes. The guy on the left is Tim from Armeni, whom Kostas didn’t allow any of the first bottle of water since he didn’t deserve it, having driven there. 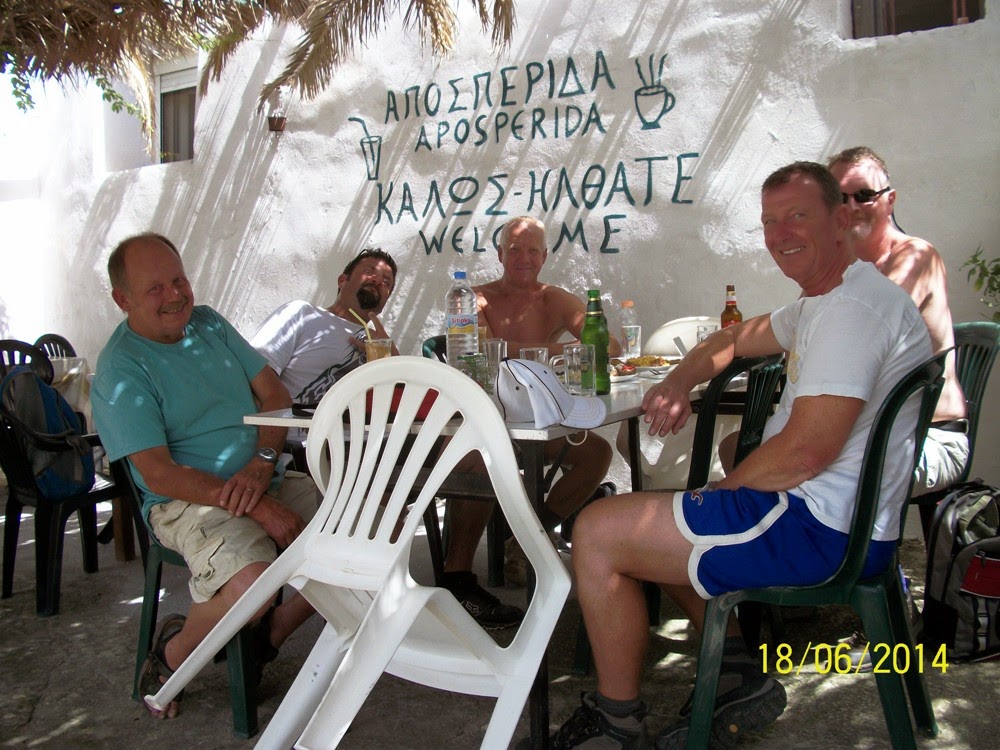 Next came a schlep up another mountain followed by a walk down a winding goat track back to Kapsa Monestary. Here there was no shade at all but luckily a breeze had sprung up. 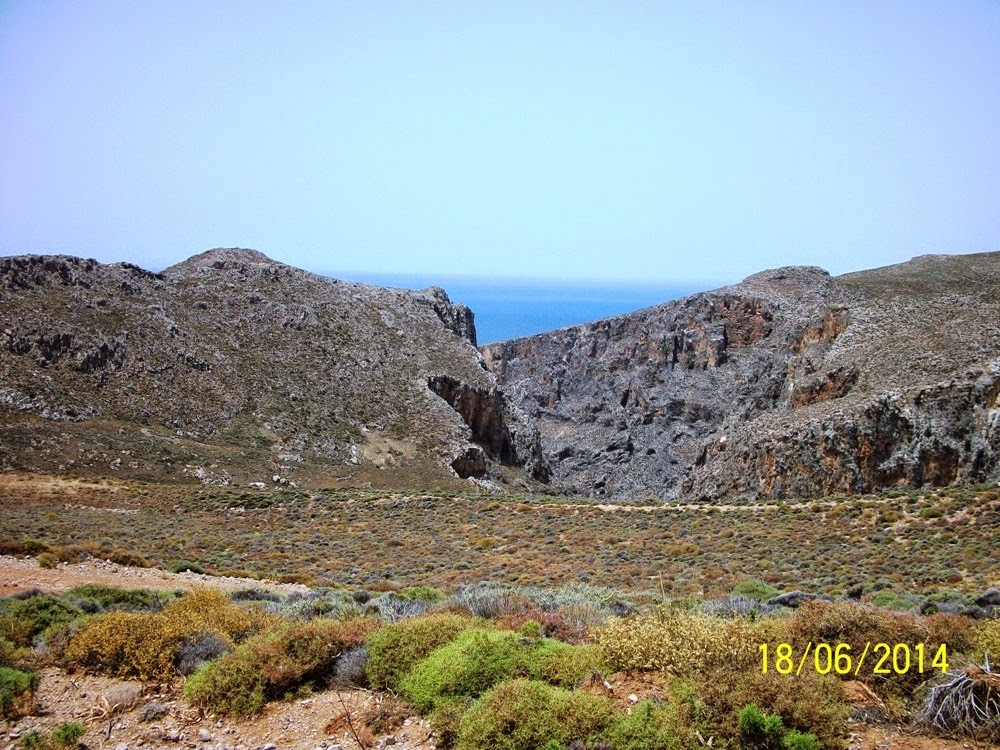 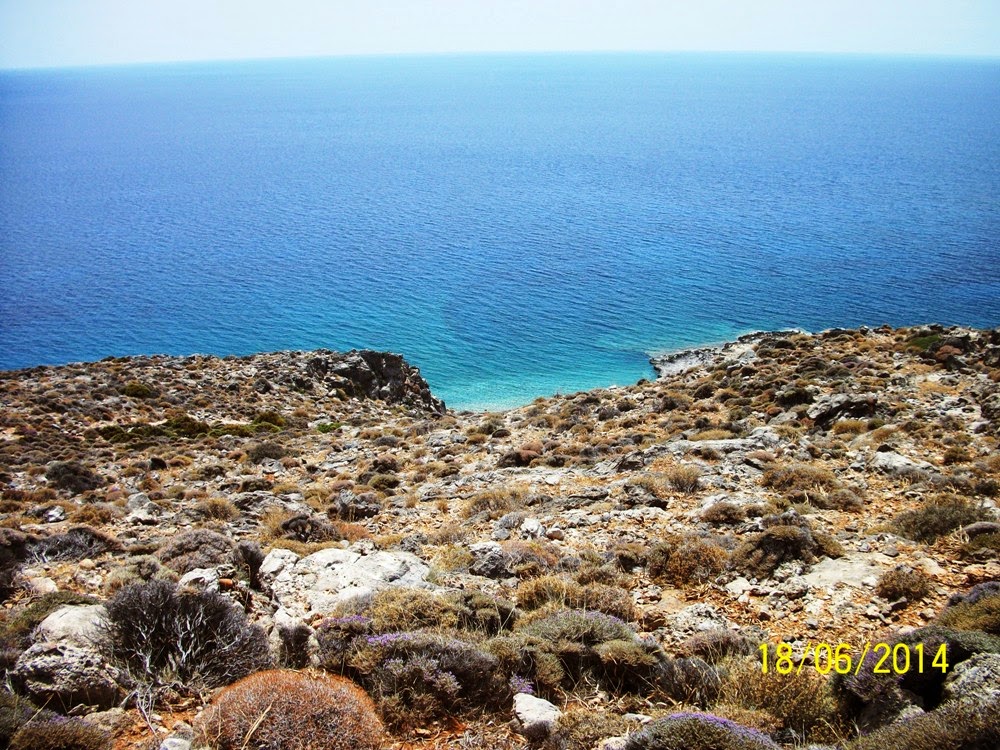 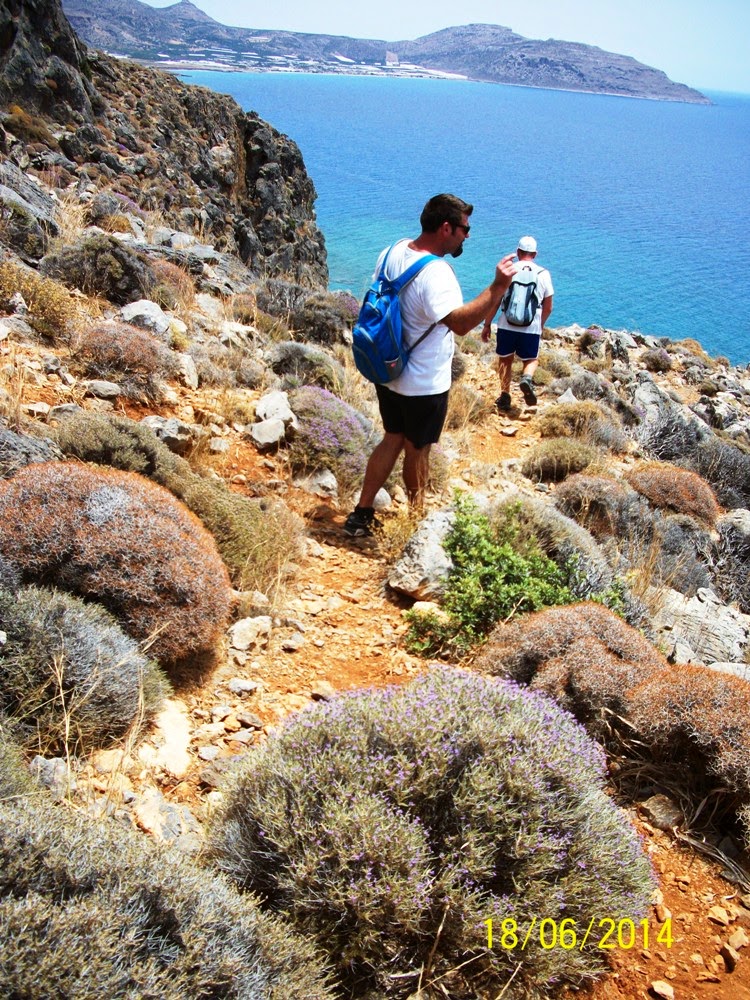 In all the distance covered was about 8 miles, but I’m guessing because my pedometer packed up on the way back down. I think I’ve worn the thing out. 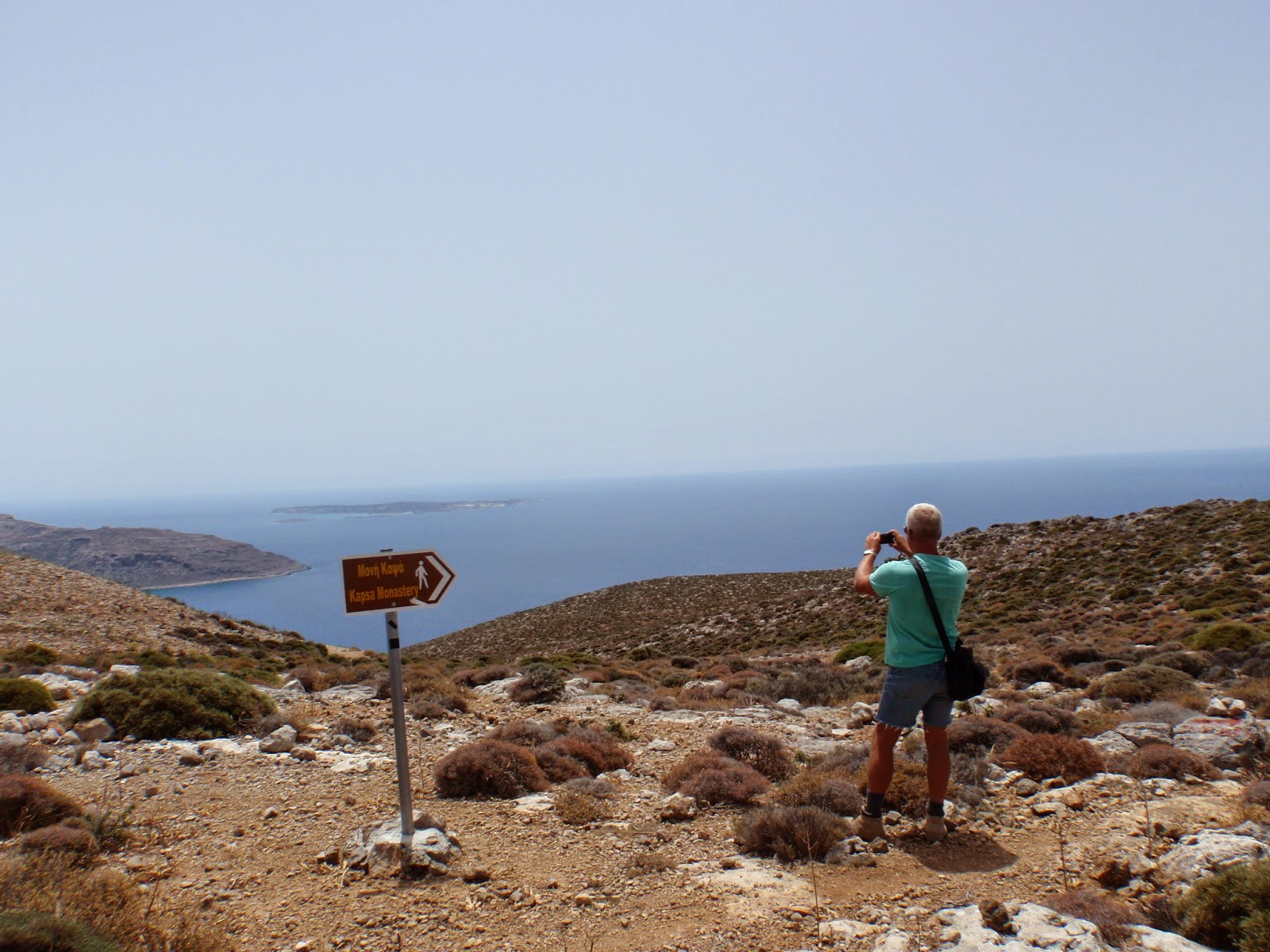 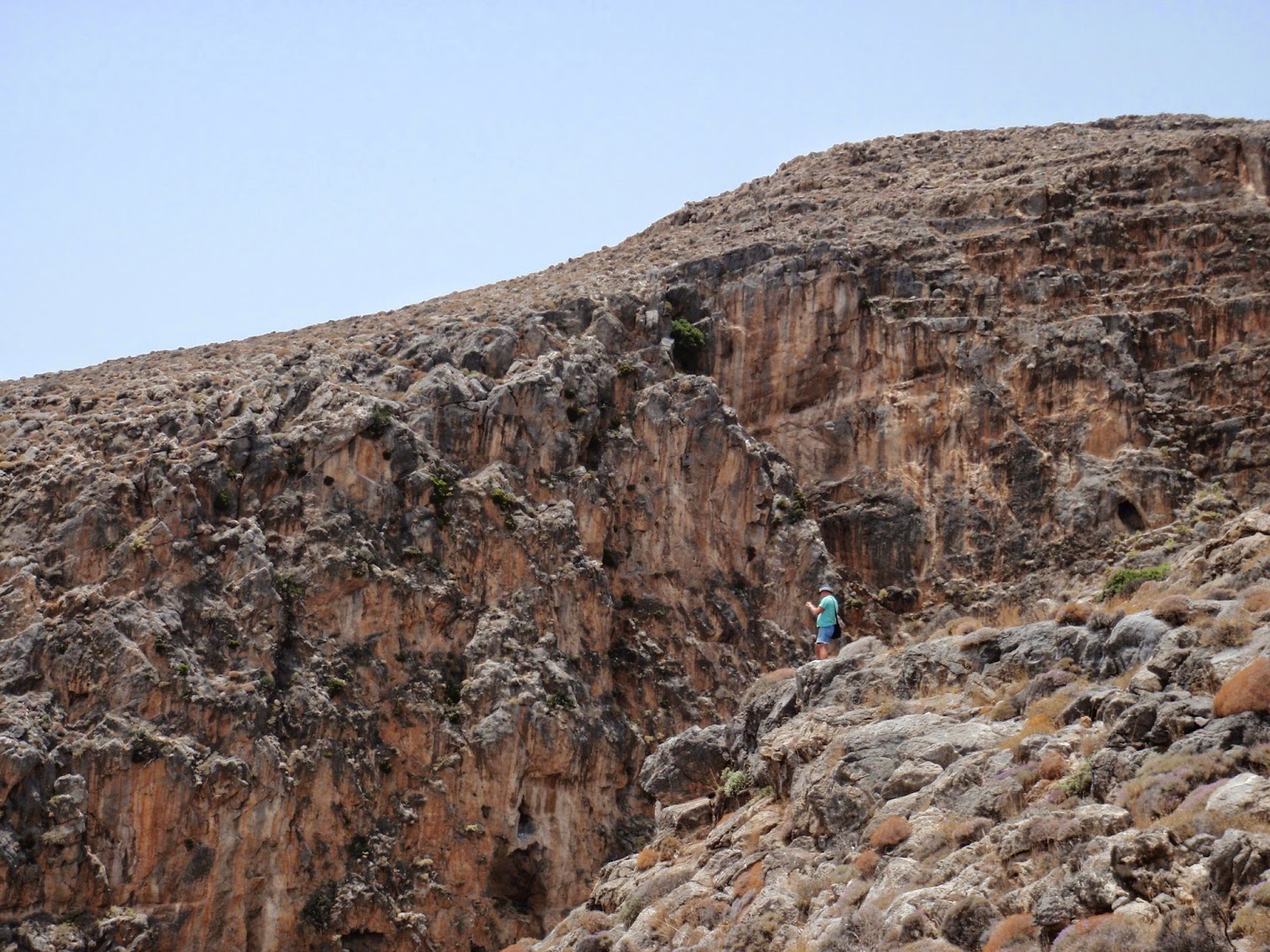 After this I returned to Makrigialos and swam maybe three-quarters of a mile. This was okay. It was only on my second swim that cramp hit first my right calf muscle then my left. In each case it was like I’d been whacked there with a hammer. Later I ordered a gyros and found I simply could not put too much salt on it – my body was crying out for the stuff.


I suspect, unfortunately, that it’s beginning to get too hot for this kind of trekking.
Posted by Neal Asher at 8:39 am

Just had a thought. If you're going to be doing this stuff full-time you may want to grab a few of these shirts, they are truly exceptional.

High wicking, don't get stinking (though you probably will), hold their shape wash after wash. I wore the same two shirts pretty much everyday for seven months while we were on our travels.