On Sunday morning, I woke to a beep from my mobile and checking it found a text from Chris at The Rock. Did I fancy walking up Pervolakia Gorge and, if so, to be at Bay View at 9.00. At first, I thought it must be a text somehow delayed from the previous week. Then on checking saw the time stamp was from 1.00 that morning. My next thought, knowing that Mad Dog Kostas was at The Rock the previous evening, was that this was late night madness to be regretted in the morning. Even so, I began preparing for the walk. Obviously, I have been working on the theory that if you smack yourself in the calf muscles with a hammer the pain is all in the mind – a subjective experience of the universe fully open to interpretation or one I could ignore. 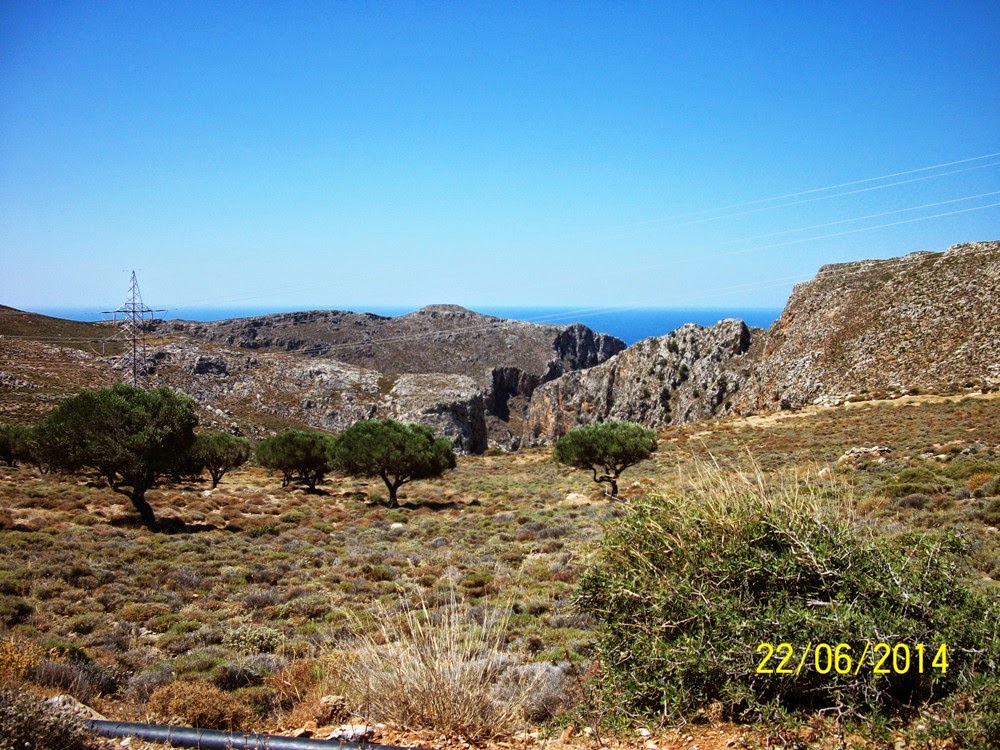 Later Chris confirmed that the walk was on. Two English guys from Newcastle way wanted to walk the gorge and he was taking them. 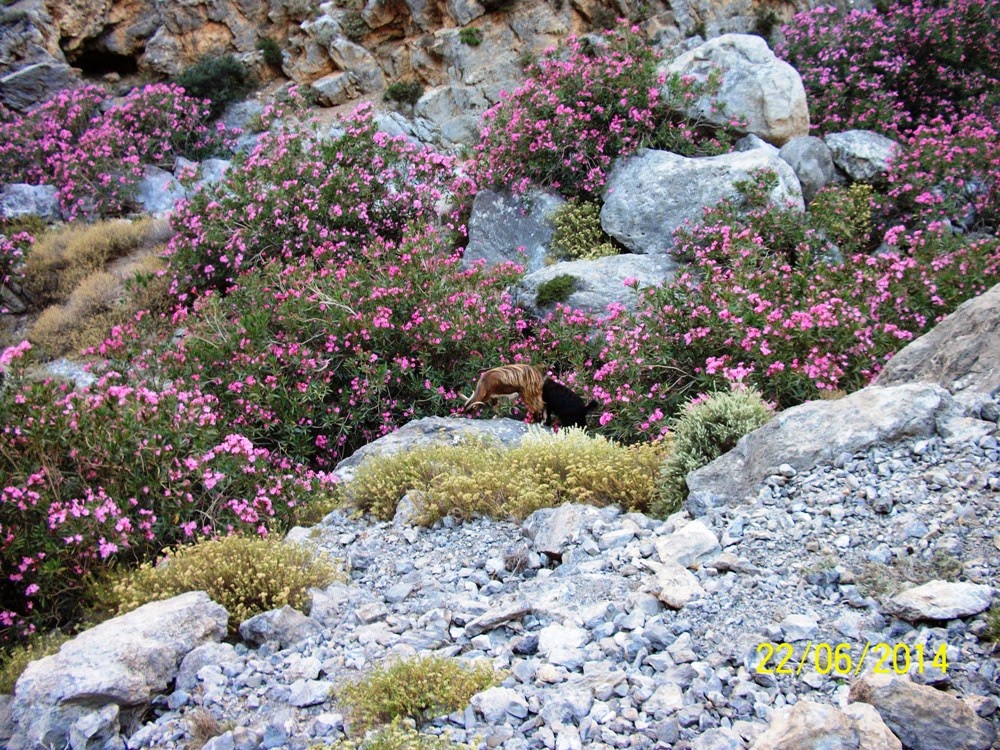 As I drove to Bay View, I wondered if these two were prepared for what was to come: if they had brought water, had the right footwear ... had brought hats. I briefly met John and Rob at Bay View then again at the car park below Kapsa Monastery as we set out. Here are, from the left, Chris, John and Rob: 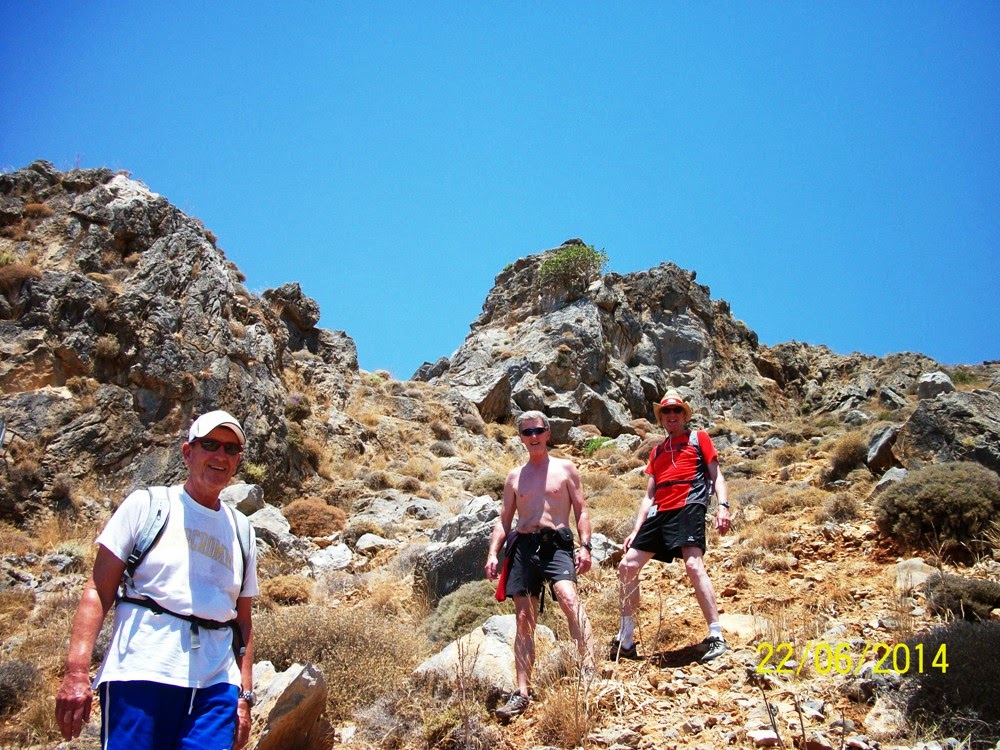 During all this, at no point were the words ‘fell’ and ‘runner’ mentioned. Chris set out at a blistering pace that my inner masochist enjoyed, while Rob and John strolled along on what one of them called a ‘social walk’. Talking to the two, I learned that they like to do stuff like tramping for miles through two-foot deep snow, walking up Ben Nevis, or shaking the cobwebs out with frequent six-mile runs. Then, of course, there’s the fell running: 26 miles across marsh land – the kind of running that might make your average London Marathon runner pall. It soon became apparent that no, these two did not spend their holidays here seeing Crete from a sun bed. 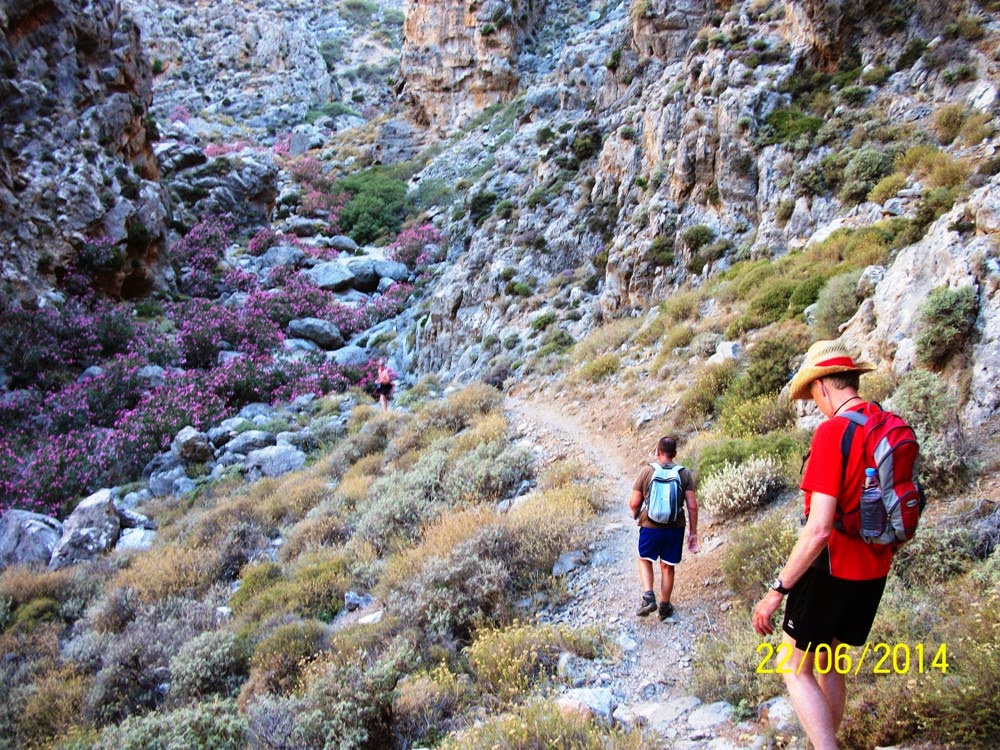 We reached the top of the gorge in 1.5 hours, which is good going, then stopped for a break in the Kafenion (only one beer each for Chris and I). 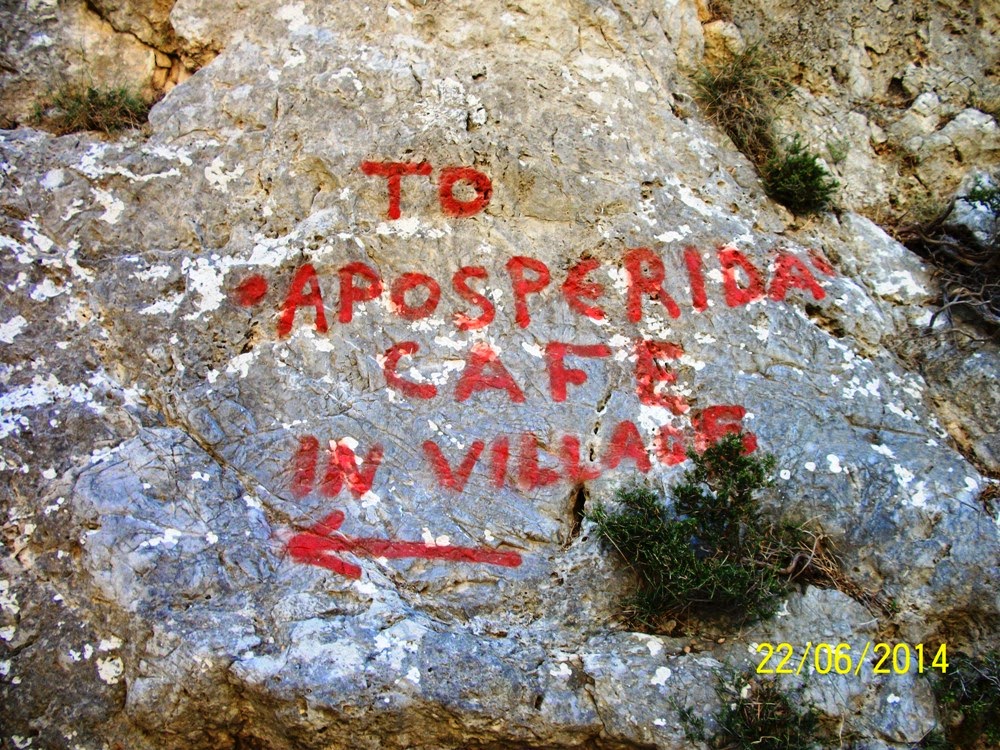 Next, we climbed another 150 metres to find the goat trail down, which was what Rob and John wanted to locate. 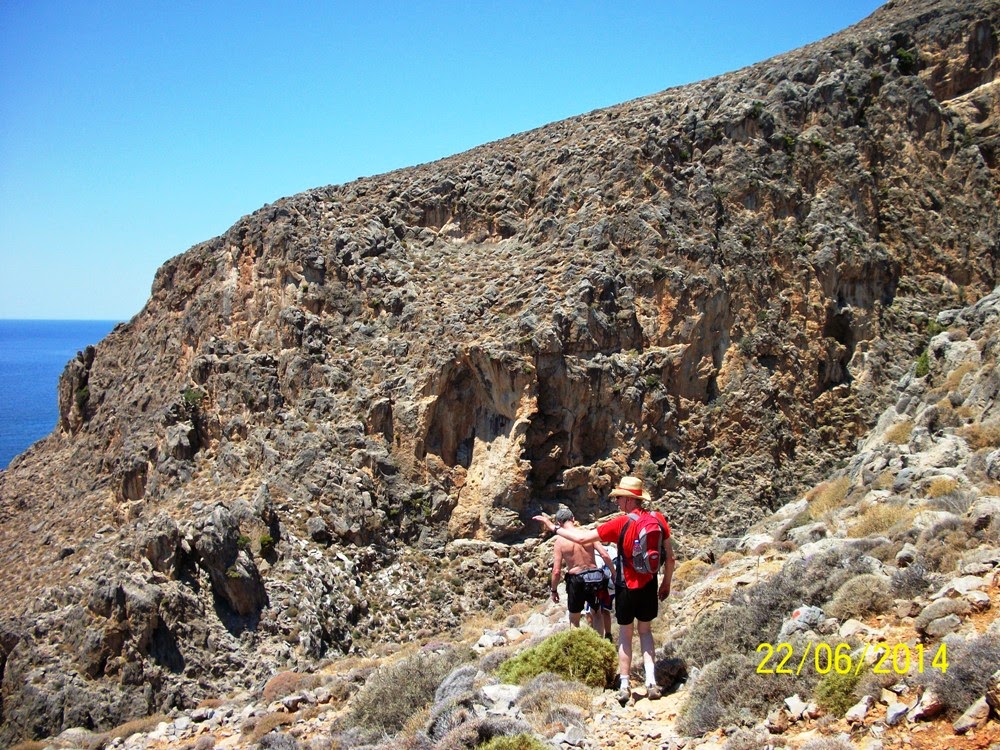 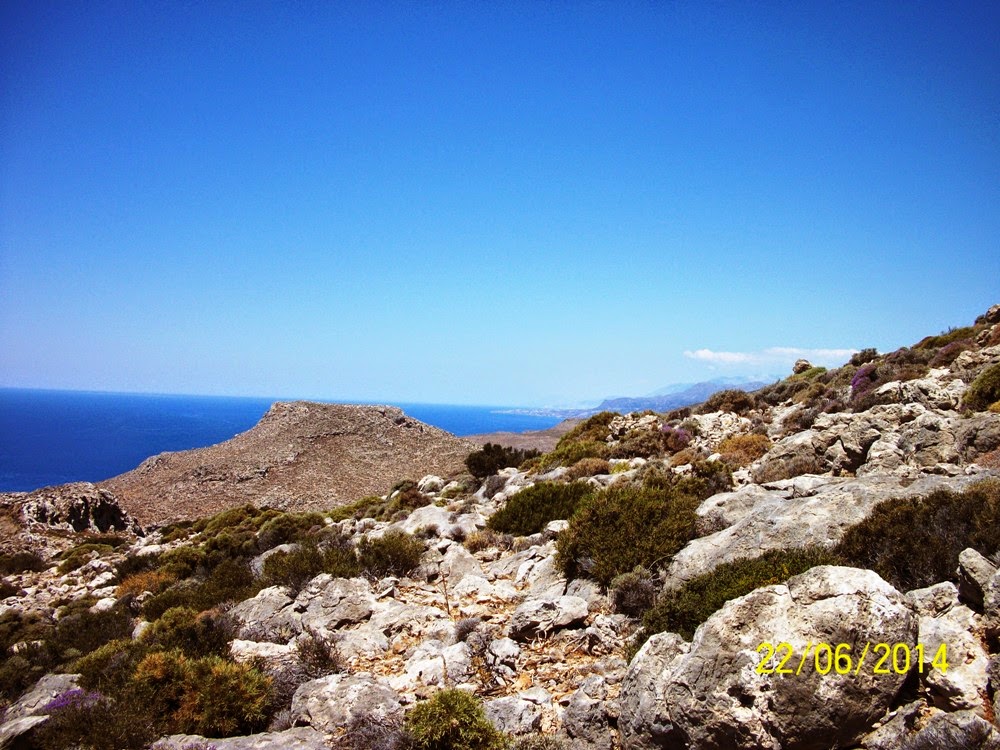 On the way back down, we found the ‘nice cave’ that we had somehow missed on the previous walk. 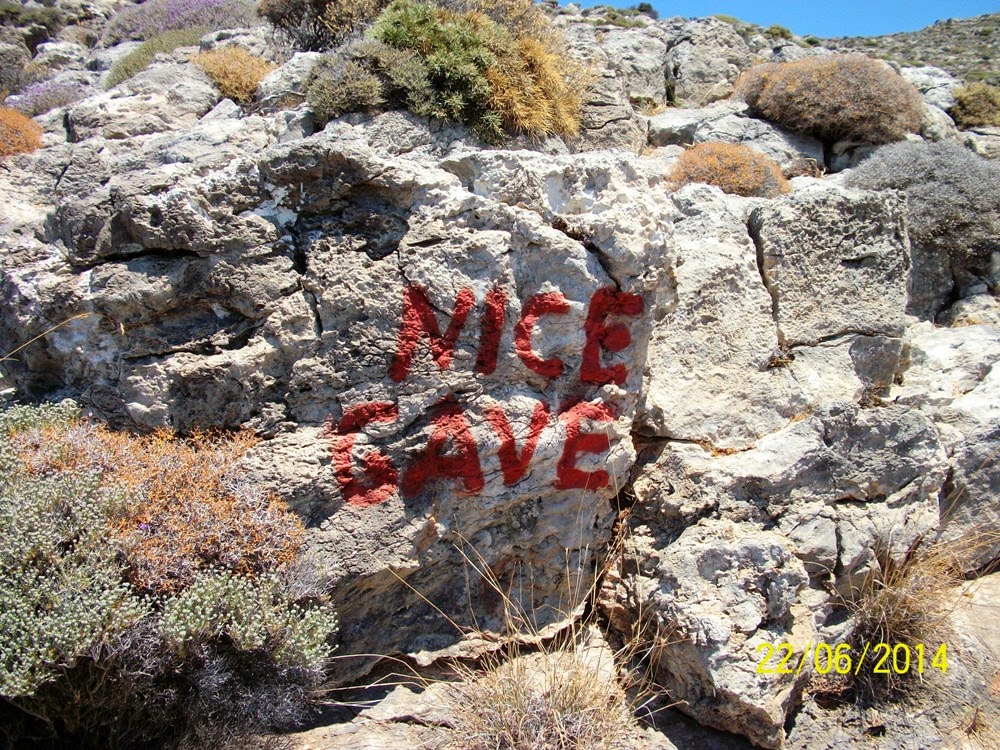 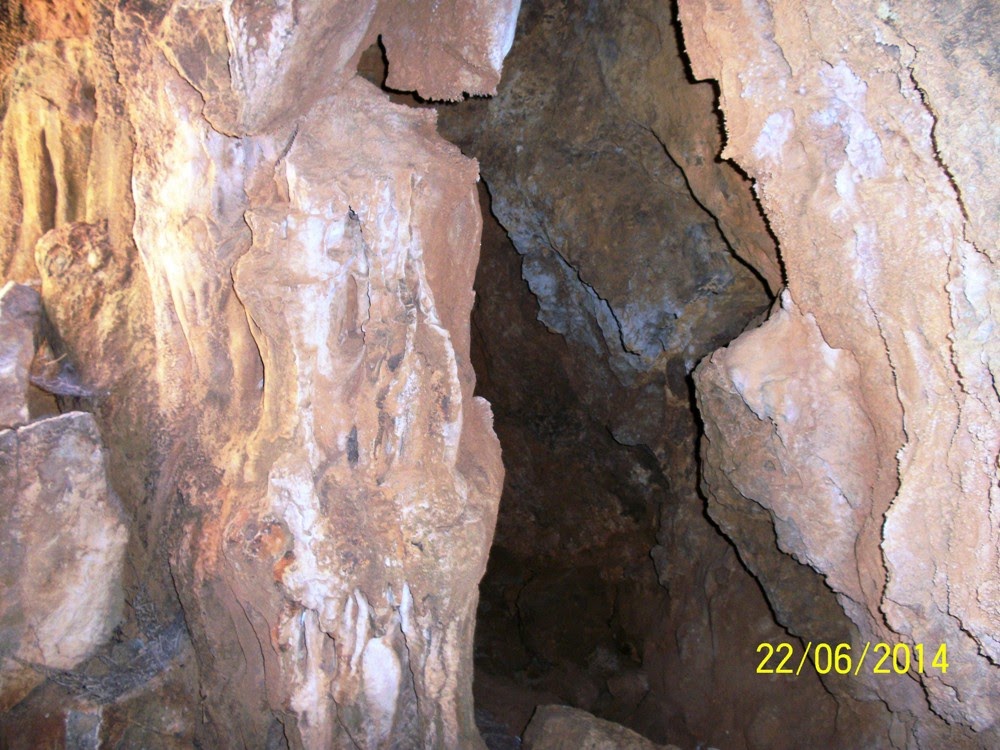 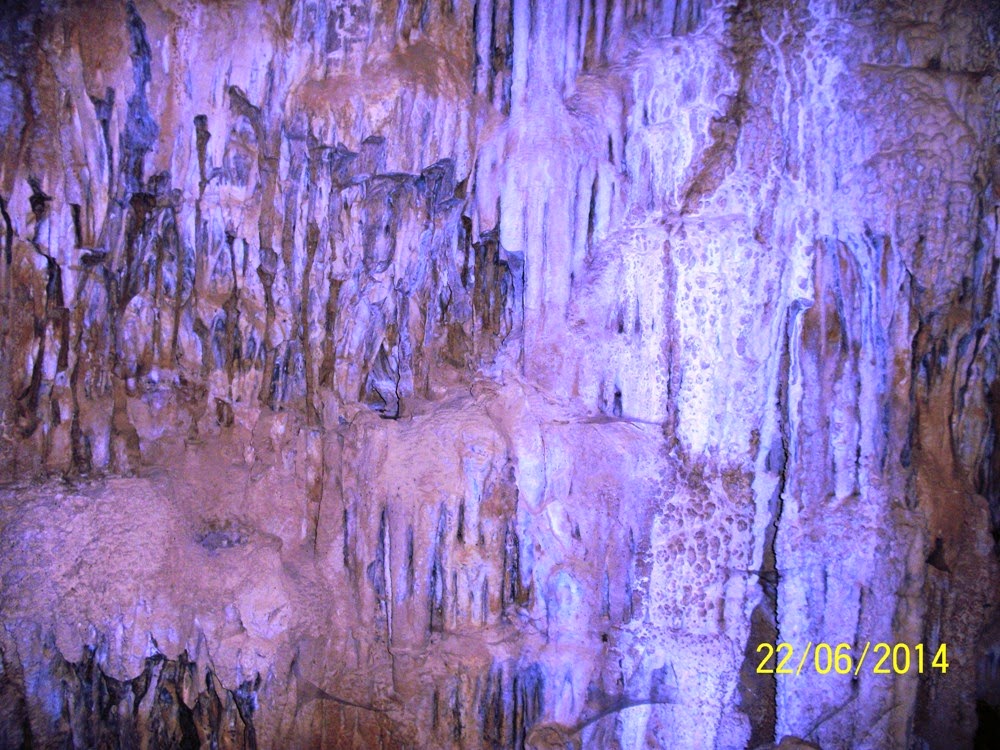 From the kafenion back to the cars was another 1.5 hours. Despite the speed at which we did the walk this time, I had found it easier. Perhaps this was because I had prepared with a rehydration drink beforehand, or perhaps it was simply that the lack of walking since my last trip up this gorge had allowed my body to recover. But y’know, I’m 53. The other three are all retirees, some in their 60s, doing physical stuff that would result in many much younger people being carted off on a stretcher. 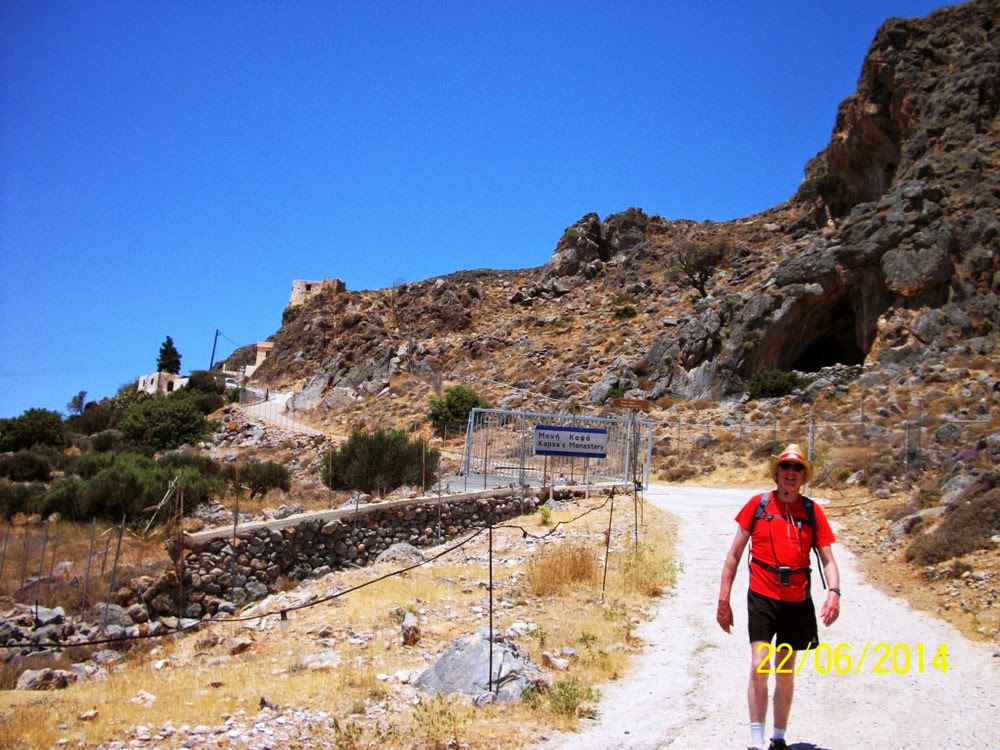 Which is one illustration of why I get immensely irritated by the words, 'But I'm too old...'
Posted by Neal Asher at 4:00 am

Crete should start paying you for all the good P.R. My girlfriend saw your pictures and wants to visit the island.

What's with all the writing all over rocks at various points? It's a tad crude if they are indeed just sign-posts.

Same here. My girlfriend wishes to go as well.

i had to schedule a session at the clinic just after reading this.

Wow Neal, Crete looks great!
I hope i can visit the place in future as well one day.