So, we've got a hostile race of alien biomechs somewhat in the mould of H R Giger aliens. They're pretty much intent on exterminating the human race though currently a shaky truce is in place. Humanity is divided into the good guys and the Directorate, so let's toss in some terrorism, subterfuge and traitors. We also have starships sporting particle beam weapons, railguns the size of skyscrapers, laser batteries, missiles... And then there are the uber-human super-soldiers clad in powered armour and wielding plasma weapons... Is that enough for you? Okay, beyond all the above loveliness the characters engage and there's a good story here with the action ramping up all the way. 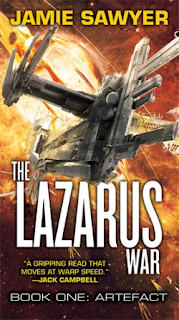 This, dear readers, is the good stuff. Recommended.
Posted by Neal Asher at 7:03 pm