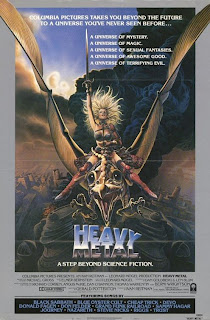 Well, since it's now out there on the Internet, there's not much point in me keeping quiet about it. Hopefully Hollywood Insider won't mind me pinching this:

David Fincher's Remake of Heavy Metal a No-Go at Paramount.

Not even a bigshot like David Fincher could keep Heavy Metal at . The Zodiac director, who is currently putting the finishing touches on his highly-anticipated Brad Pitt movie The Curious Case of Benjamin Button, has been spearheading an edgy remake of the 1981 R-rated animated flick inspired by the 1970s fantasy magazine of the same name. But Tim Miller, whose Blur Studio is handling the animation, says he and Fincher, along with current Heavy Metal publisher Kevin Eastman, are now shopping the film to other studios because Paramount's new production execs felt the movie was too risque for mainstream audiences. The project is an amalgam of erotic and violent storylines penned by well-known sci-fi scribes like Steve Niles (30 Days of Night), Joe Haldeman (The Forever War), and Neal Asher (Gridlinked). The concept is to use eight to 10 of these shorts in a single movie with each segment helmed by a different director (Fincher is on deck to direct one). Though things are on hold until another studio picks it up, Miller is confident the film will eventually see the light of day. "David really believes in the project. It's just a matter of time," Miller says.

Five of my stories up for inclusion -- about half the film.
Posted by Neal Asher at 2:02 pm

it will be 5x better than the last one.

the name Heavy Metal implied there might be some heavy music behind the original film. marketing CEO's decided that some pop cotton candy shitfluff would fit in well with the movie. it ruined it.

the second time i saw it i brought Hendrix, Stooges and Sabbath on headphones because of the wimp sound factor. Journey? Hagar? please....

if it does go thru put in some Pig Destroyer, Wolf Eyes, Carcass and Bolt Thrower if you have a say. or better yet, give me an address/email i can write a letter to. no reason to have 2 wimpy movies competing for tepid care bear hugs. i'm a slave to good animated movies when it's not all cgi clunk.

did i mention, this is great news??

Dammit.
Mind you, it's not dead yet.

On the other hand, I read tonight it was going to Columbia, but there also seem to be rumours that the project may be going back at Paramount. Interesting times.

I'm looking forward to seeing something of Neal Asher's on the big screen.

I mentioned him writing for the Heavy Metal back in September and it's good to see it finally moving forward now.

It's something I'm not going to fret about. I've done most of the scripts for the stories concerned and am just about ready. If it comes that'll be a nice bonus. But right now the reality I focus on is that I'm averaging a couple of books a year at Macmillan and elsewhere, sales keep on climbing, and I have no intention of slowing down.

someone at paramount hates fincher is all. damn guy is a genius in my book.

just rewatched the movie. the music, again was such a backwards erection to the fun of what the movie could've been.

didn't realize i had seen this movie so much i was recueing the overload of mustard on the sandwich. the particular zombie that i really fell for. john candy's dialogue (before the mute button was thumbed), Hannover Fist moves.

heres my big bug though for you Neal. i have to admit brain dead incompetance or myopic moronity ... i went thru your wiki/homepage/various blogs. do you have issues listed of HM that you have written for anywhere? or is that something that i heard only in the back of my mind yesterday when the last brain cell atrophied? signed, stupid fan in bibleland.

Vaude, never written for Heavy Metal. Before all this I was already in contact with Tim Miller at Blur Studio (after emailing him about Rockfish) and when this came up he asked me if I had anything that fits the format. I happen to have about 50 short stories that fit the format.

"I happen to have about 50 short stories that fit the format."

move over Jadorowsky. seriously want to petition for good music if you have a link/email/adress..