The Hobbit (Part One)

Well, we went to see the first film of The Hobbit yesterday. I was a bit worried about it being a bit of an over-extended franchise but I shouldn’t have been. Converting a single book into a single film can be a bit dodgy because there’s always more in a book than in a film, and some of the best films have been made from short stories. I also shouldn’t have been concerned because it was Peter Jackson doing this. Some may have complained about the extended ending to the last Lord of the Rings film but Jackson was only being as faithful to the books as he had been all along. 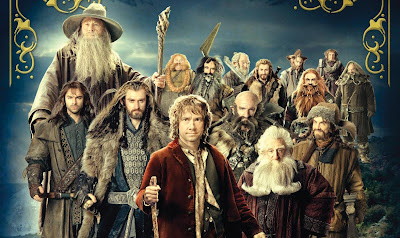 I sat there for the best part of three hours utterly riveted. It was visually gorgeous, great fun, I enjoyed it immensely and, of course, Martin Freeman was excellent. Perhaps I enjoyed it so much because Tolkien played a large part in my formative years. In junior school I remember a teacher reading The Hobbit to us and the first book I picked up on my first visit to a library was The Two Towers, and after that I read LOTR maybe five or six times. Is it only readers of that stuff that get slightly choked up when elves first put in an appearance or when Galadriel pays a visit? Probably, but Caroline, who has read none of these books, very much enjoyed the film too. Highly recommended.
Posted by Neal Asher at 8:23 am

Email ThisBlogThis!Share to TwitterShare to FacebookShare to Pinterest
Labels: Fantasy, Film and TV

Tony B said...
This comment has been removed by the author.
9:16 am

I went to see it at the weekend - due to some confusion on showings we ended up watching the 3D version... glad we did!

**Few spoilers but come on, anyone reading this blog would have surely read the book...**

The part with the goblins (if a little daft at times - Indiana Jones anyone?) and the eagles looked amazing, definitely watching the rest in 3D.

Obviously a few adjustments / concessions had to be made in the conversion, it's been a long time since I read the Hobbit, but am I right in thinking the role of the Pale Orc was made up to provide more focused 'bad guy'?

Oh and why didn't the eagles finish them all off when on the ledge - they seemed to be doing rather well...

Anyway, better than I thought it would be, I know it was a children's book but personally I would have preferred a darker tone like in LOTR.

ah, i'm glad you liked it. the hobbit was one of my gateway books as well, and has a special place in my memory.

my younger sister gave me a rather nice hard cover for christmas so i could read it all again before the movies. fantastic.

We are going this weekend. I've been waiting for the crowds to be finished, and will go to the last showing to get my fix.

Antony, I know that some bits weren't precisely to the book. Even I remember wolves and not waargs and in that particular scene there was no pale orc. In fact, I'm not sure if there were orcs in The Hobbit at all - just goblins and trolls. But then, I heard it read to me by a teacher about 40 years ago so my memory is not to be trusted. It was still bloody good though.

i hated it. the over use of face shots to convey the 'feelings' of the group & the cloying music was painful.

if it was trimmed to a half hr without all the pad, might have enjoyed the cgi. cornball geared towards spoonfeeding a teen was running through my head the whole time. the person with the cape and leaf hat 3 rows back was the only person laughing at the jokes.

it doesn't matter, he's rich, you liked it, my opinions are weighed by the other 40 movies i've seen in the last 30 days. Django had the same feeling. written by an ass with diarrhea. non yes men editors needed.

Have you read The Last Ringbearer? You'll never see LOTR in quite the same way again, after that.

It was far too long: first hour was bloated self-indulgent at best but the latter 2 were much better. Sadly though the mirror structure and interchangeable character ropes mean that this series sales in comparison with the LOTR trilogy.

We enjoyed it so much, we had to go see it again to get all the details in.

2D was much better (imo) for the reason that 3D gets too much at times; too much detail at once and the inability to relax and take it in - let your eyes stroll etc. It's a different experience in 3D, which of course also has its great spots.

I never cared about slight story-changes to LOTR nor The Hobbit in the film-adaptions, because it's the feeling of the books they need to recapture - not the literal re-telling, and in my view they did succeed.

Azog, the pale orc, for instance dies in the battle of Moria (slain by a then young Dain). His son Bolg is present as the army leader at the end of the Hobbit at the battle of the five armies.

But anyway - these movies are what fantasy movies should be, to me.