I don’t like the name e-cig or e-cigarette because the association in that name wins part of the battle for who are trying to ban these devices, or regulate them out of existence. I prefer the word vaporiser, but I’m sensible enough to know that fighting against popular usage is a battle you’ll lose. This is unfortunate, really, because the name e-cigs contributes to the ignorance about the thing so named. Many people, it would appear, seem to think an e-cig is that cheap plastic object that looks like a cigarette and is sure to raise the hackles of the of the ardent anti-smoker. In the growing e-cig subculture these are ‘cigalikes’ and generally worthy of only contemptuous dismissal. 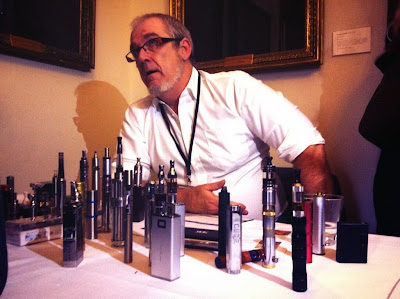 A couple of days ago there was a big summit on e-cigs which included the likes of  Dr Konstantinos Farsalinos, the sensible Clive Bates, Jeremy Mean a MHRA spokesmuppet on e-cigs and everyone’s favourite rabid anti-smoker Deborah Arnott of ASH. Presentations can be found here and more can be read here and here. 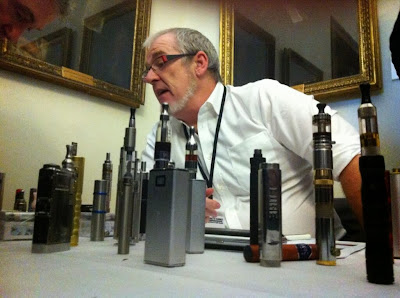 The guy in the pictures (my thanks to Elva Pote for providing these) is Dave Dorn who is the frontman for Vapour Trails TV, and a discussion on VTTV about this e-cig summit can be found here. During that discussion it was mentioned how people from Big Pharma, Public Health and elsewhere were quite astonished upon seeing the items on this table. Here then are people who have been pushing to regulate or ban something they don’t appear to have a clue about. Here then are people suffering from a bad case of future shock. Part of their argument is that upon seeing someone using an e-cig others might think it is okay to smoke an analogue cigarette, or that it will ‘renormalize’ smoking. Do these items look anything like a B&H or an Old Holborn roll-up to you?

Jeremy Mean is the MHRA rep (not BMA), and is the leading spokesmuppet for them on the subject of E-cigs.

Thanks schoolofdolphins. I will correct. I was a number of large gins under when watching VTTV last night.

I thought the same for some time. The worst thing the industry has done is to align itself with the "C" word.

Personal inhaler, vaporizer, whatever. Drop that big red flag and we could have flown under nanny radar....

If the word 'cigarette had never been used, would we be under the radar or be linked to either medical devices or illegal drugs? I suspect that when money and jobs are threatened anything goes and we'd have only stayed under the radar if vaping hadn't increased so that it's affecting NRT and cigarette sales plus the vital 'sin tax'.