We went to see Ender’s Game and thoroughly enjoyed it. The film isn’t in the league of something like Aliens. It’s a bit young/adult and there’s nowhere near enough gore for me. Still, it was enjoyable, and not too far from the original book. If it’s successful we’ll probably be seeing Speaker for the Dead, though, of all Orson Scott Card books I would rather see Wyrms. 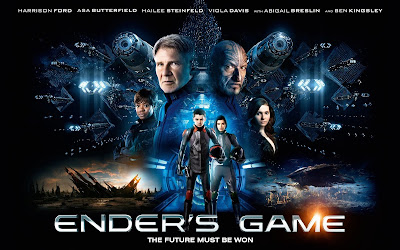 I note that some in the gay lobby are calling for a boycott on the film because of Orson Scott Card’s (religion-based) bigotry concerning them. I’d heard about this before but never really bothered to look into it. I see now that it all stems from an article he wrote in 1990 that has all the justifications and twisted logic of any who believe in a sky fairy, and that in intervening years he’s gone into a fast PR reversal from it. Doubtless he has also made other comments elsewhere on this and, apparently, funds an anti-gay political pressure group. But in the end all of this is an argument he and his kind have lost (well, in civilized countries).


As I have noted elsewhere: if I limited my reading and other entertainment to the product of only those I agreed with I’d have missed out on some wonderful stuff (Aliens being a case in point). But then I’m not gay, nor could I judge this if Card was against heterosexuality since I don’t define myself by my sexuality. The closest I can get is: how would I have felt if he’d been arguing to make atheism illegal? Come to think of it I’d still have gone to see the film and I would still have read the books. Views like his are so far outside the Zeitgeist as to be irrelevant.

Henry Gee has some interesting stuff to say about this on his blog. I can’t say I’m surprised by the first sentence – SF conventions seeming to have become the home of much righteous prickery of late. Check Jim Braiden’s comment for a relevant quote from Card.
Posted by Neal Asher at 8:54 am

Apparently the box office has been dire, which is a great pity. It's nice to see a film that stayed so true to the book. I came out of the cinema slightly overwhelmed at the end. Plenty of spectacle, bombast and the child (young adult) actors were faultless.

I thought it was a very watchable film and didn't deserve a dire box office.

No complaints from me.