Here’s an update on the last few days. I want out of this but when I look online and research the subjects of delayed grief and complicated grief there is no quantification. Be gentle with yourself, it will take as long as it takes, is the kind of advice from the counselling side. While from grievers themselves: it can keep coming back, it never goes away. I guess my wish and the wishes of others in my position is what led to all the nonsense about the stages of grief. But I guess the question to ask is, how long can the brain take to rewire itself? And can I force the issue? Fuck this ‘it takes as long as it takes’ and fuck this ‘be gentle with yourself’. This is giving up, opting out, saying don’t expect too much of me henceforth because I am a victim. In a similar respect I’m getting a little … tired of the meditation-speak. All this ‘let things be as they are’ accept and observe the thoughts passing through your brain, relax, do nothing.

Jan 30th
I guess one of my problems is that I always viewed emotional displays as self-indulgent. Often, when I would see someone miserable, I would feel that they are 'reveling in their misery'. They would be putting on an attention-seeking display. It's not just my attitude it is also a British attitude. You hear a Sergeant Major's voice, 'Smarten up there, don't be such a wimp, man.' It's different in other cultures where there is a lot of wailing and breast beating, and maybe they've got that right. If you don't let it out you don't heal.

Feeling a bit better today. I've written all I can about the death. Maybe I'll write more as it occurs to me but certainly not 2,000 words a day. The pictures still fuck me up but I'm getting longer periods of calm. I guess if I have any advice for anyone who is going through or who has gone through the same thing it is: don't do what I did. Don't run away. I did it by exercising to exhaustion and just shutting down my mind, for two years. Don't run away into a bottle. Don't run away into a packet of pills. In fact I have gone completely about face. My advice is 'revel in your misery', because you need to and you have to. 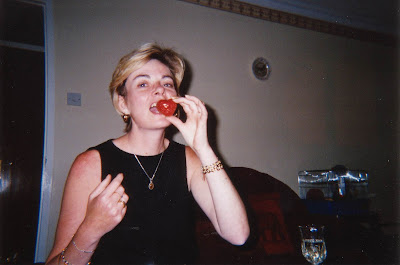 Jan 31st
Again today I am ‘processing my grief’ I am ‘dealing with my issues’. Basically looking at photographs and thinking. Whatever. I’m finding that now I’ve opened the box I get periods when I want to close it again. I’ll look at the pictures and find my eye straying away from Caroline or I want to stop thinking about the attached memories. I sometimes find myself trying to transfer the feelings and in that way escape their true source. But I force myself to look at Caroline and remember, and all the shit feelings are right back where they should be. A further result of this is, as I think I mentioned before, the grief, in the right place, is now hitting me outside of looking at the photos or writing about this.

Today I’m going to have dinner with Caroline’s parents. I wonder, now I’ve opened things up, how that will feel? I’ve eaten there before many times since her death but of course was practising avoidance. Now I will see the empty place at the table, the photographs there, the empty living room chair … all of it. 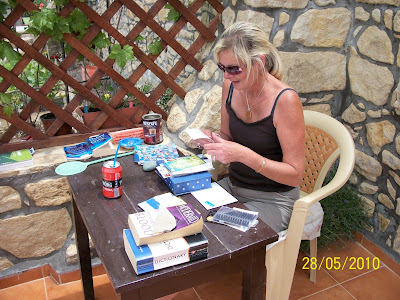 Later…
It has been a week now with the photographs. I will continue this, but I feel I need push myself back into my life. I know this sort of thing should have no time-table, but life must continue too. I have left jobs half-done, I really need to get the vacuum cleaner out and, since someone just collected my old freezer, I seriously need to clean the kitchen floor. And finally, and most importantly, I need to find out if there has been any mental change in my attitude to writing. Tomorrow I will sit down and read through the book I started writing back on Crete and, thereafter, I will see how it goes.

Later still…
First time I've REALLY talked with Caroline's parents about her death since she died. It was very hard sometimes, and it was also a relief. They did not know about the perpetual vomiting. I did not know that she asked her mother to hold her about an hour before she died. Went to pieces when I heard that. But it all has to come out: talked out, cried out, written out. 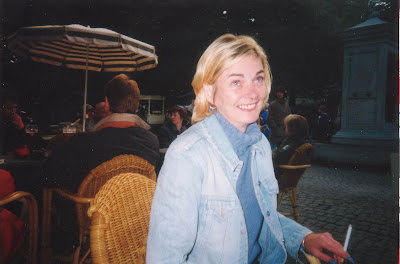 Feb 1st
I always look for answers to things and try to apply logic. This delayed grief or 'complicated grief', upon reading all the symptoms, seemed like the answer. It seemed like this was my problem. But I also like proof, empirical evidence of any theory. When I started looking at photographs and writing about Caroline my depression left me and my anxiety dropped away. The negative voice in my mind got quieter. Things that made me paranoid and a bit crazy lost their charge as my fucked up emotions returned to their real source. That's empirical evidence.

However, I was disappointed to still be waking up and having panic attacks if I stayed in bed too long. I noted that the more I thought about Caroline the less power they had, but they were still there. Now, this morning, after over a week of grieving and then after a kind of watershed in really talking to her parents about her death yesterday, I've woken up feeling okay. No panic attacks this morning. Now it is a case that I don't 'think' I'm on the right path, I know it. 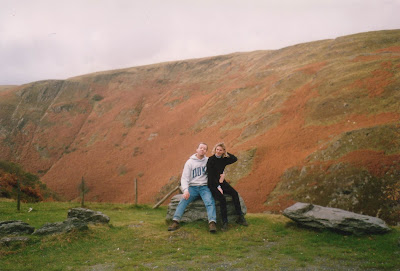 Feb 2nd
I was very happy about the change in me after talking about Caroline to her parents, and the morning of the day after I was pretty good. However, I then found some old pictures of our first year together, and they hit me like a pile driver. Panic attacks back this morning and a general feeling of misery when I was first out of bed. However, I sat and thought for a while and realised that of course I shouldn’t expect an even and steady climb in mood, or a steady improvement in my state of mind. Inevitably there will be ups and downs. Yes, I was miserable, but that’s grieving, it’s not all about tears. And though I was miserable I wasn’t depressed and incapable and again I did not feel anxious. I pushed myself and got on with some jobs I had neglected and now feel myself coming back up.

One further note: I didn’t have much time yesterday to get on with some writing, just a few hours. Most of that time I spent reading what I had written before, but I did also manage 300 words of fiction. It’s not a lot for me, but it’s one of those positives I should process!


I spoke to a counsellor at Cruse Bereavement Care today. She'd heard it all before. People stop grieving and shut down on everything because it it hurts too much. But then the grief comes back and bites them. Depression and anxiety are the top signs, along with lack of interest in things, distrust of people, expectation that life will be shit, purposelessness, moments when you feel like you're going crazy because you can't shut down the negativity in your mind, oh, and panic attacks for good measure. Time to go and look at some more photos...
Posted by Neal Asher at 3:43 pm