For 17 days now I’ve been looking at photographs. It has been wiping me out constantly and there has not been a day when I haven’t cried. I’ve tried to keep eating healthily but sometimes that’s difficult. In lieu of that I’ve bought stuff that’s easier to eat, but unhealthy. I need the energy for this. Even so, the physical toll is being paid as you can see below. The second paragraph of the article quoted I read after googling ‘physical effects of grief’ because I did think I was getting the flu. 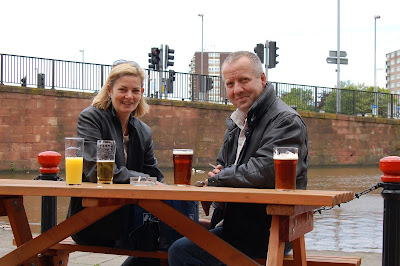 Feb 10th
It is reassuring, again, to talk to a bereavement counsellor. It's nice to know that everything that has been happening to me is fairly common: the anxiety, panic attacks, depression, lack of interest, lack of trust and the feeling sometimes that you're going crazy. I've had times when I've looked back on how I've been thinking and not recognized myself. And it's not just mental, it's the whole body. It is also the case that it lasts longer than anyone, who has not experienced it, expects. 'Get over it man, smarten up!'

Also reassuring is to know that everything I am doing is right: the photographs, writing about it, talking about it - getting it OUT. Right. More of that 'getting it out' today. After I've checked back through my journal and to search for signs of progress. You know, there's a book in this. I think I might call it 'No Exploding Spaceships Here'.

Comment…
The counsellor was right about it being the whole body. I've felt like I've been developing a cold for a few days, but it's not coming out. After the grief hitting me a couple of times today I feel freezing. The heating thermostat is fine maintaining 21C, it's mine that isn't working properly.

Later…
Yes and yes...
"A common feeling of people dealing with loss, is the feeling of going crazy. The emotions are so strong and intense; those grieving often think they are the only ones to feel that way or that their feelings are wrong. You're not crazy, and you're not alone. By understanding these emotions, we take the first step toward realization and thus our first step on the pathway of healing."

"Perhaps the most commonly reported symptom of grief is utter exhaustion and confusion. In her book, Surviving Grief, Dr. Catherine M. Sanders explains "we become so weak that we actually feel like we have the flu. Because of our lack of experience with energy depletion, this weakness frightens and perplexes us. Before the loss, it happened only when we were sick."

Later Still…
Bloody hell, four Cornish pasties, a packet of hobnobs, a packet of ocean sticks, two packs of pork scratchings and four cups of tea. This is what it has taken to give me enough energy to get my body temperature up, and to not stagger when I get out of the armchair.

One day last year I hiked 12k, kayaked 10k and swam about 2k and I did not feel anywhere near this exhausted. Today, as per an earlier post I felt like I was getting the flu. But then, that I ate so much tonight must mean the stress response eased off a bit.
Posted by Neal Asher at 10:32 am