Here we go. Andy Remic contacted me about maybe submitting a story to Vivisepulture. Now, I don't really have any Polity related short stories that haven't already been published somewhere, but I do still have a few nasties in my files, so I sent him one called Plastipak. You'll find the kindle version here. I'm told:

The official release date is 20th December, and the antho will be going out for the special Christmas price of £0.99p (to try and get it up those Amazon charts!!). On 26th December it will revert to £1.99. 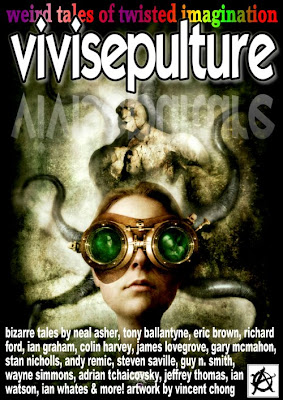 For 99 pence it's got to be worth a punt. Looking forward to reading your story. I also like Ian Watson's short stories so that's something else to look forward to. Guy N Smith! Not heard that name for ages. I remember reading his horror novels in the 80s.

Add another two purchases, showed it to a fellow SF nut at work today.

Could do with a review on Amazon, I may get around to it after I read a few stories, got to finish another book first.

I think they are out of business :(

After some 40 years promoting new authors, we regret to say that we are now closing down our business. We wish new authors every success in the future with new publishers

Well damn, he didn't tell me. This means I can rework Runcible Tales and publish it myself, or maybe use the stories from it plus some extras in a collection.

Cheers Neal,look forward to Runcible Tales as well. Any thoughts on Masons Rats on Kindle?

Maybe a collection with Runcible Tales, Mason's Rats and a few others. There're some stories out there that have yet to appear in a collection - stuff like Owner Space and Shell Game (in Dozois anthologies) and one or two early ones from various small press mags.

I would like to see that. Another question to that accord - how did the Spatterjay Audiobooks do on audible? I would really like to see/hear more audiobooks from you since I'm travelling around 2 - 3 hours a day. Any news on the audiobook front?

Roger, Wildside press are talking to Audible about The Engineer ReConditioned. If I have any news on that I'll put a post up.

Oh, and there's stuff of mine on http://www.starshipsofa.com/

well thanks Neal. Here is the link for anyone interested.

I just donated €5 to the site, I don't know if you get any royalties on it but I think it's prudent to support SF sites ;-)

Btw. the introduction is quite a challenge for a Swiss guy - what is that? Scottish?

He sounds like a Geordie to me Roger, that is someone from Newcastle, NE Englandshire. Even we Scots need subtitles for those folks!

Well, does not matter, updated my parser over night and getting the hang of it - I JUST LOVE this patois :)