It's the Population, Stupid.

There’s quite a bit on the news about a hose pipe ban in the East of England and I cannot help but note how the elephant in the room is being ignored (or, read The Departure). 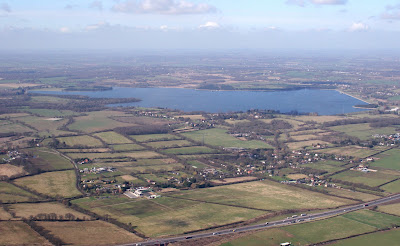 Over just the last 20 years I’ve seen our local town of Maldon expand hugely, acquiring a suburban belt half a mile thick with its superstores, roads and other facilities. This is just one example of what has been happening across large swathes of this country yet, I don’t recollect hearing much about reservoirs being dug (though we do get nimby-ism resulting in this).
We must also remember how people’s habits have changed since the middle of the last century when the weekly bath, shared by the family, was common. How many showers are pouring every day now, how many washing machines and dish washers churning, how many flush toilets operating? Consider how much water one person now uses each day, which can range from 50 to 150 litres, and multiply that by millions. And consider that the population of London alone is getting on for 8 million.
Another question to ask is where does the rain we do get go? With so much ground now covered with concrete and tarmac it runs off, into drains then into rivers and out to sea. This is also the cause of many of the floods the media have been getting hysterical about in recent years. You may see some old town or village getting submerged, but don’t just blame the weather, blame the housing estates and cities upstream preventing water soaking away and thus passing the buck downstream. Put a waterproof layer over the land and water runs off quickly and, surprise surprise, the land dries up.
Yes, we have had a couple of dry winters, but they are not the main problem. The problem is infrastructure failing to keep up; infrastructure right at the limit where it fails under just a little extra strain. And of course, it’s the population, stupid.
Posted by Neal Asher at 9:49 am

Email ThisBlogThis!Share to TwitterShare to FacebookShare to Pinterest
Labels: Environment, In the News

And I thought it was caused by Climate Change!

Of course flogging off reservoirs and crumbling victorian infrastructure doesn't help.
High density of population is always going to cause problems but nobody is going to admit that if it means spending instead of making money.

I live not far from you and I agree.

The fact that government continues to ignore the problem of overpopulation is frightening. The population will eventually drop cataclysmically because we do not have the means to support an exponentially increasing population and as a race we are far too stupid to implement measures to get the population to level out. Here's hopign that it doesn't occur in my life time

I work at a university and part of my job is to support a renewable energies course, wind/solar/hydro and air or ground heat pumps for example.

Part of that is making houses more efficient so they have less effect on the enviroment and use less energy. The recycling of Grey Water (recycled water from showers, washing machines and the like), for flushing loos for example can help reduce the overall demand for water.

Even if the climate isn't changing the need for houses that are far more efficient in needing less gas, electricity and fresh water is obvious.

Phil M, They have to admit it eventually, the problem is it then takes many years to solve. Just look at that program that's running at the moment about the London tube.

AngryMurloc, our politicians just love to avoid issues that might be vote losers.

Alberon, since our shower is right next to the toilet I use the grey water from it for flushing, though filling a bucket with a plastic jug. I must get round to installing some kind of pump...

Don't get me started. Oh fuck it, I'm off. The Southeast is being over-run by developers commercial and domestic.

I lived in Hertfordshire before Essex, and it was exactly the same. You simply cannot keep on cramming this number of bodies into a corner of England without an adverse effect somewhere, if not everywhere.

I think this Southeast centric mindset is lunacy. Too many people, too few resources, too much pollution. And given their way the government is going to try and ram in a load more things will only get worse.

So while we all agree that houses and resources should be managed in a more holistic and environmentally friendly manner with on-site generation etc to offset our impact.

Alberon, I appreciate your sentiments I really do, but I think you are either not close enough to the southeast to have a clue, or you are naïve and just maybe a little indoctrinated into the Green agenda to see the problem. Too many people equals not enough to go around… so simple.

And another thing... There is a modifiable water network in the canal system that could be used to move water from the wet areas to the dry. As some bloke pointed out a week or two ago, you need webbed feet to live in the Northwest this last couple of years, and yet we are in drought down here. It’s mental. Expand the Canal network, boost tourism as by product, provide employment while you build the additional infrastructure and build resilience into the water network.

Is it me or is it “not fucking rocket science”?

As I noted on Facebook: I deliberately didn't mention the GW words at all. This is about population and infrastructure. We should allow neither water companies nor government to get out of their responsibilities by blaming their problems on the weather.

The water company said the reservoir, which would have held 100 million tonnes of water, was necessary to meet future demand for water in the South East but that it was willing to alter its plans.

Campaigners had fought the plan, claiming there was no need for such a large reservoir and that it would damage the environment.

Graeme Finch, I actually do live in the South East and I'm not suggesting this is the only way the problem can be solved.

The South East IS overdeveloped. I live in a village just south of a major town and we're constantly fighting new housing developments the local road infrastructure cannot cope with, let alone vital consumables like water.

Ecologically, as well as economically, concentrating everything in one corner of the UK does not make any sense.

My brother in law works for British Waterways. They've done a lot of renovating the network of canals for tourism and the like. Expanding the network by presumably digging new ones would cost a lot of money and take a lot of time to achieve. Sadly its not the answer.

I'm not indoctrinated by the Green Agenda, in fact I think they're as nuts as people who go around insisting there are no enviromental problems caused by modern life, though I still believe protecting the Green Belt as much as possible is more than worth it.

But even if the population was evened out rather than squashing into one corner of the UK (and ironically the only way you could achieve that would be the soviet style dictatorship seen in 'The Departure') you still need housing that causes less enviromental impact than we have now. Even if the population stops growing which, globally at least, it won't we need to adversely effect the enviroment as little as possible. It's common sense.

ThatsSkarWithAK said...
This comment has been removed by the author.
7:20 pm

The plans have been there a long time to build reserviours, join the River Severn to the Thames (Yes they pass suprisingly close to each other).

"Some are building new reservoirs, although one of the biggest new projects, a Thames Water reservoir near Abingdon in Oxfordshire, was recently turned down over planning objections."

"One scheme that has stubbornly refused to be ripped off the drawing board is a link between the Severn and the Thames."

AS shown in this link.

Ah but sorting out water infrastructure costs lots of money while a hosepipe ban costs next to nothing and may even bring in some income through fines.

Noticed Boris suggested moving water from Scotland to England. He seems to have difficulty with the differences between North and South and up and down. Just 'cos we're north of London doesn't mean were at a higher elevation. And water is heavy stuff, one ton per m2. It takes a hell of a lot of energy to move water when you can't use gravity.

There are not many consolations living in the north west so I'll admit to a certain smugness...it may be grim up north but at least its bloody wet.

Apologies Alberon. I just saw a narrow band argument and thought... That hasn't been thought through properly, what about the real reason, we're up a gumtree.

One more year, just one and then we are moving west.