Sent on Twitter by Geoff Utley from Compass Books in San Francisco Airport. Chris - presumably the guy in the photo - loves my work. 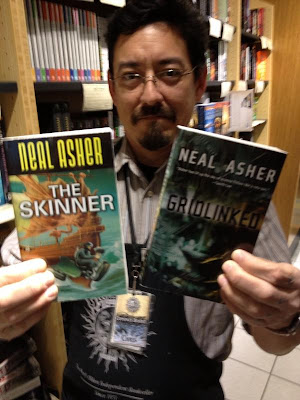 So at this point it's worth reminding book buyers and readers in America:

Here’s an update on the news for my American readers. The people at Night Shade Books are looking forward to bringing The Owner Trilogy to print in the US and have scheduled The Departure for publication Feb 5, 2013 with Zero Point following May 7, 2013 and Jupiter WarSeptember 3, 2013 (catching up with publication of that last book in Britain). Nicely keying into that my short story The Other Gun will be appearing in Asimov’s April/May issue that year with, of course, mention of these books in attached biog.

One thing I've been wondering about... Why do you need US publishers? Can't they just sell the same books as in the UK? They're both in English right? Sure there are some subtle differences like colour vs color and sidewalk vs pavement... But, I can't see that as a reason to reedit, and probably "translate" it to american...

I guess the publishing industry isn't yet fully globalized, Jan. Then again, perhaps it's like any other product. You can be damned sure that if you're drinking Amstel in Australia it wasn't made in Germany. Delegation.

I guess the next question then, is do they do the same thing with your ebooks? Do you for example get both UK and US versions of your books for Kindle? I'm fearing the answer is yes...

Ahhh, sooo, any plans on making it to the US for a book tour in support of said releases?