Okay, I’m back on it this week – writing my 2,000 words a day. On the first day I made numerous corrections and continued with a piece that was, well, drudgework. The next day I sat down and didn’t feel all that interested in what I had been doing. I was feeling restricted by the plot and following it to a conclusion that is now there vaguely sketched out in my mind. So I escaped the plot.

Many times before I’ve mentioned the quote above (and now, since I’ve been running out of writing quotes, I’m making my own which I will scatter here). In my own way I did the same thing. I decided to up the stakes, throw in something new, spice the mix, in fact, disrupt my own plot. And I was quite glad that I did so because, well, the thing has happened. What thing? Well it's when I stray like this and introduce a new element. In other books these elements were the Golgoloth, Sverl, the Jain squad recorded in the Spatterjay virus - the weird shit. 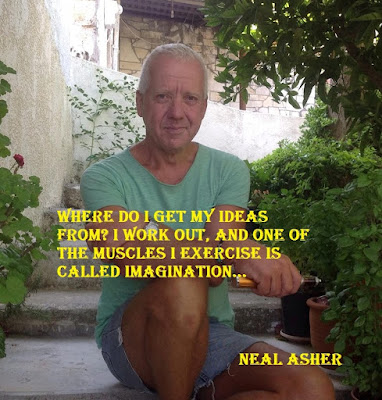 This time it is something called the Clade. Here's a little sample:

The Clade was a late product of Room 101 and a failure. Its component drones had been made to penetrate prador war machines and seize control of them. But something had happened post-production that caused them to hive together as a single unit. It had been scheduled for destruction but escaped. It was insane, dangerous and, knowing the right buttons to press, a very useful ally...

… which, since I posted it on Facebook has now become this:

The Clade was a late product of Room 101. The drones had been made to penetrate prador war machines and take control of them. But something had happened post-production that caused them to hive together as a single unit, which named itself the Clade. It had been scheduled for destruction shortly after this but, ruthlessly efficient, and amoral, it had murdered its way aboard a departing dreadnought and escaped. It was insane, dangerous and, him knowing the right buttons to press, a very useful ally… 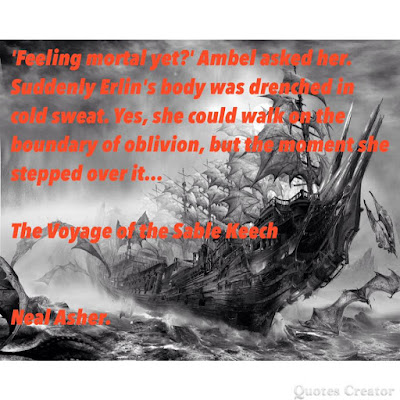 On day three I took the plot twists a bit further to introduce a strew of red-shirt disposables. This is because I am seeing something wrong now. So consumed have I been by the high tech and the weird, by the powerful non-human characters like the Clade, that I don't have enough weak ones, with their own entangled goals, for contrast. 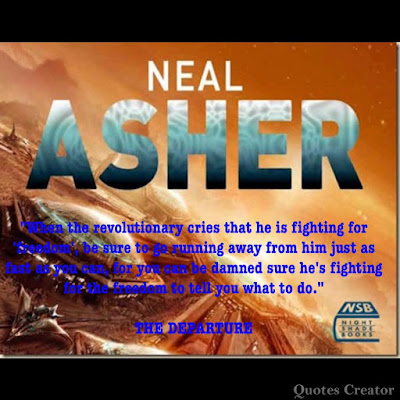 It is one of the problems that can develop in both SF and fantasy. If you create superman he has to have people to protect and you have to create kryptonite, else there is not much of a story. If you make everyone superman and kryptonite doesn’t exist, there is no story at all. There must be weakness and the possibility of failure. There must be characters who can suffer and die. 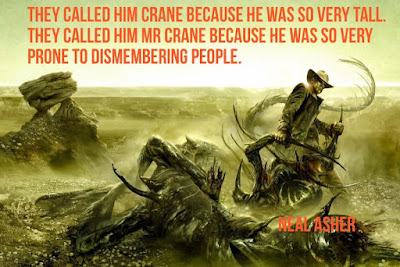 Here endeth the lesson.
Posted by Neal Asher at 11:10 am

Glad to hear you're going again.
I've much enjoyed your books, and they're still moving forward to who knows where.
I find the prador children rather endearing with their fond belief that Father loves them....
Many other high spots. Penny Royal is amazing.
As a sculptor, The Technician was special.
Regards,
Stephen Fox
stephenfox.org.uk

Thank you kindly Stephen! More prador in the offing now...


Always good to hear these snippets of what we can look forward to. Though I initially misread the reference as "the Claude" ... which doesn't sound quite so scary!