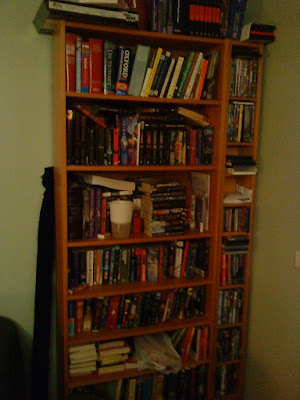 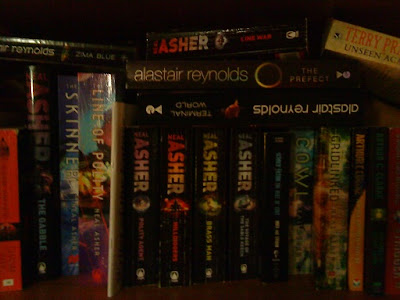 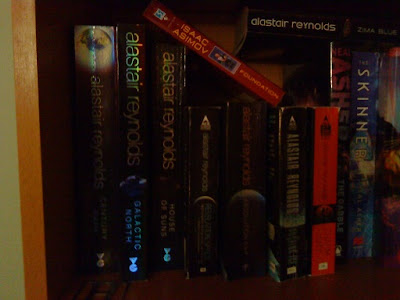 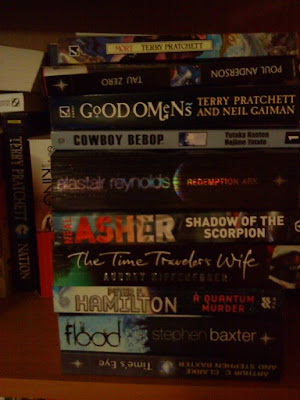 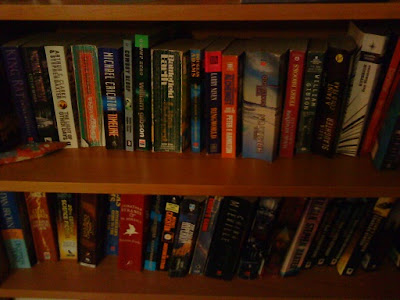 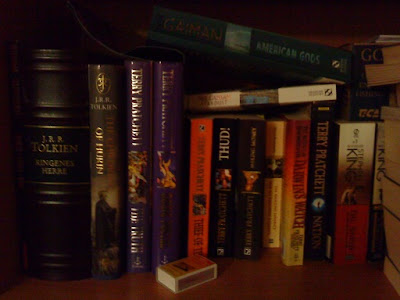 This is practically a carbon copy of my bookshelf. The similarity is astonishing - the book shelf even looks the same!

Is that a pint of lager or a candle?

What did you think of the Stephen Baxter book "Flood". I find his books a bit bloated and this one did not impress me.

Haha, almost exactly mine too, including The Time Travellers Wife!! I have a bunch of the Gardner Dozios best of the year books on top, cause I really love short fiction, but my collection is otherwise made up of fricken awesome human expansion type stuff that I would kill to live in /sad face at lack of spaceships

Ph, and I have a Tolkien King etc bottom shelf too. But the thing that made me laugh out loud was that I also have a heavily worn (same cover) Battlefield Earth!!

Ooh didn't expect these to be posted. We also have another bookshelf at least, but its all in boxes, about 6 of them... so this is under half of ours.

Lol, pint of lager. No sir that is the most uber plant pot ever made. It "feeds" itself from water underneath. Basicaly its pretty crap and doesn't work very well :)

I loved the flood actually but am a big Baxter fan anyhow. I enjoy the Manifold series too however his greatest work IMO is the retelling of The Time Machine, Time ships. Bloody brilliant.

Nate: I love Battlefield Earth! I must admit though after reading the likes of Neal and Alastiar etc the writing is a tad simplistic compared to them. I also really enjoyed the Time Travellers Wife, even though I had avoided it for ages.

BTW, in the boxes are also a couple of shelves of Terry Pratchet, mostly the GFs collection though although I do really enjoy his books from Monstrous Regiment and up.

It's a Billy bookshelf from Ikea, so it is quite likely that some may have the exact same bookshelf!

Hah, just watched the film of 'The Time Traveller's Wife' the night before last. I think I knew the ending from about the point he first talked to his father-in-law.

I too enjoyed Battlefield Earth, but when I tried one of the others in the series I abandoned it in disgust.

People generally choose to hate L Ron Hubbard because of scientology, then go on into the usual illogic of 'I hate you therefore your books are crap'. But it's well to remember that he did exactly what he proposed: started a religion and made a shit load of money. It's not his fault that there's a world full of mugs out there.

Indeed. I just avoid the wierd shit around Hubbard and enjoyed his book. The two things he is "famous" for can be mutaly exclusive.

The same rules apply to people like Jeffrey Archer. He is hated because of his lies, but mostly because of his politics. Those of his books I've read I've thoroughly enjoyed, particulary The Prison Diaries. I suspect a great deal of confirmation bias in many who read is stuff and discard it as crap. I also suspect that a lot of people who say 'Archer is a crap writer' haven't read his stuff at all.

Battlefield Earth is my only Hubbard, but what I love about it is it's childlike simplicity, and it's hilariously awful ability to explain every single problem the hero faced with a "fortunately, he had just read/discovered/been told about" solution.

It would never in a million years pass an editor or agent these days. But it's naive innocence is quite good fun, giving me the same kick i get out of the Axe Cop comic.

I only picked it up after watching the hilarious film. I though it was a spoof, and grabbed the book not knowing anything about Hubbard, scientology or that the film was a 'serious' project attempting to attract converts!! Roflmfao now...this was back in about 1999 or so, and being an Australian or rural origin, information access was somewhat limited.

Upon learning about Hubbard a bit later, I couldn't help but feel that he was one of the all time great scam artists and pisstakers. I absolutely loved the fact that this guy ended up on a private yacht crewed by bikini babes, coking himself to death. There's a sucker born etc

But aside from the evil glee I get from BE, ( and movies like Skyline, Starship Troopers, older stuff like The Land That Time Forgot, the kitchy, stupid, badly acted junk films) I can not bear bad fiction. (Mr Asher, you are quite safely not in this category) How the hell this guy was ever considered an SF Master (as some claim), or an author in any sense at all, will puzzle me until my dying breath.

Awful awful writing. And to be honest, I dislike Asimovs books for the same reason, although I wouldn't quite equate him with L Ron, since Asimov was brilliant, and greatly improved (in my totally unpublished opinion lol) over the course of his career. I think BE might have been a fluke...

I really stuggle with Stephen Baxter. I read the Manifold short story collection and loved it, but couldn't get into the novels. Same with Flood, or maybe it was Ark? I will definately check out the time ships books now though. I really loved that Future Earth novella he did for Analog last year some time, Earth 2 i think it was called.

As to Alastair Reynolds, omg. I like to Top Ten pretty much everything in my life, and he's permanently in my TT Writers list. Only a few other people have managed to consistantly blow my mind with every single book or story. I have never been disappointed in the purchase of an Al Reynolds book.

Yay SF!! Ps, merry xmas if you're into that kind of thing, which I very much am if it involves new books. I am fingers x'd for either The Skinner or The Gabble from my boy, but the little shit won't tell me!! Haha. I think my wife might have gotten me a kobo reader, which is interesting having read that piece Neal linked to. I really hadn't though about the writers pov until then...

Whoops, sorry for going on as though this was MY blog...(sheepish)