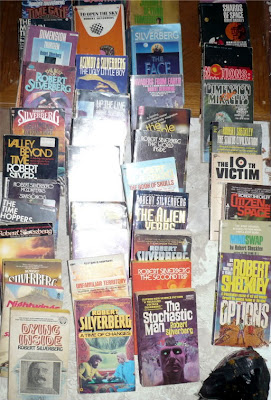 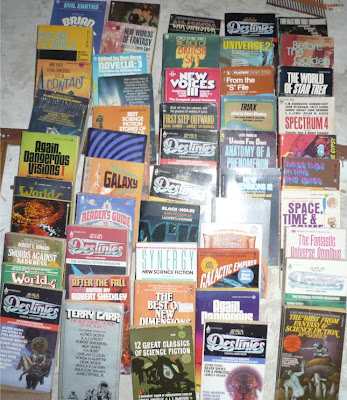 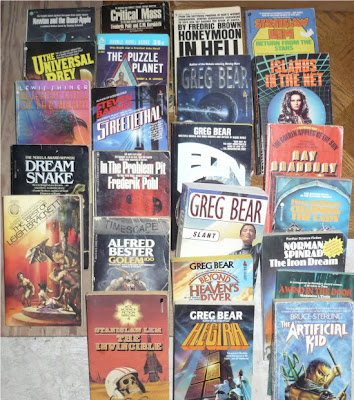 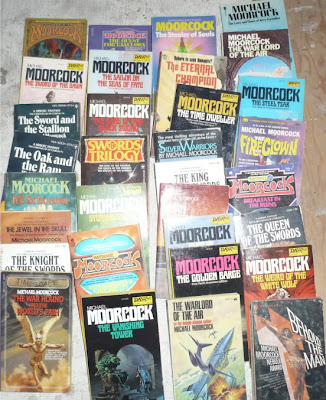 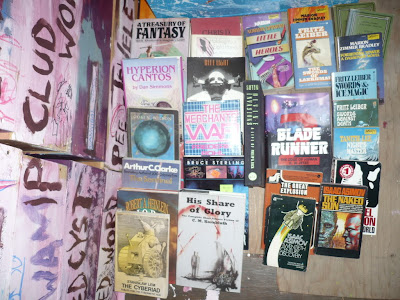 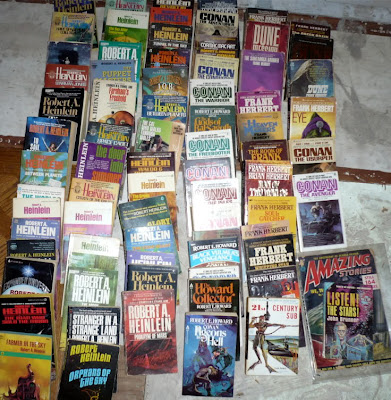 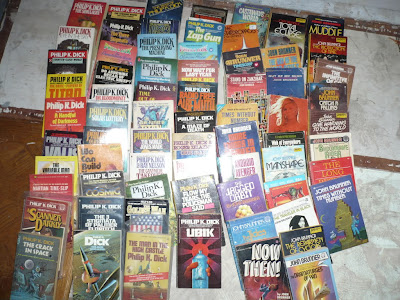 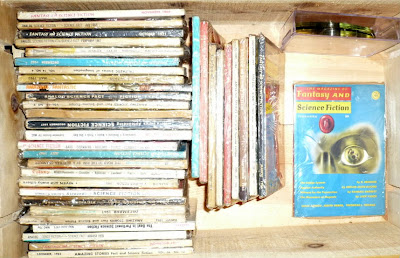 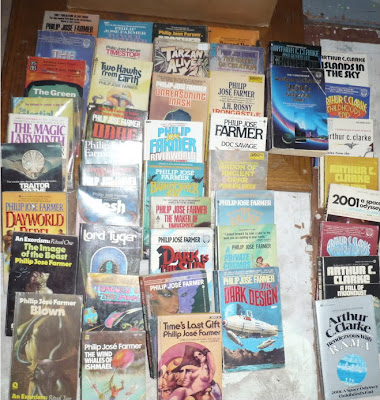 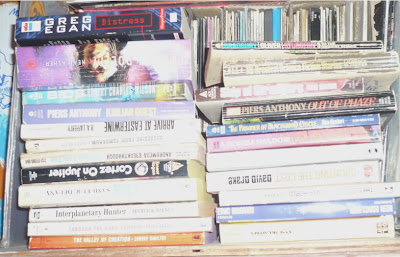 Ah, I see you've got Dream Snake there, which is one I'd like to have in my collection. Superb. One there also reminds me of one of my regrets: my mother once got hold of a collection of old Galaxy and Analog magazines and in them (the Galaxy mags I think) I read the serialized version of Silverberg's Dying Inside. I really wish we'd kept them but, after I'd finished reading them, we passed them on.

hope she never makes that mistake again, it's wrong to 'pass on'.

i was able to keep all of my stuff at a young age because i made shelves for them. 'you can hoard but it has to look like you're sane.'
didn't carry.

the Analogs are another pile i didnt photograph, thought i did like the Brunner stuff (big task, tiny brain). i was introduced to Louis Wu/Larry Niven through the first Analog i bought.

you can have my Dream Snake. really didnt care for the padding in that one. come and get it. Borderlands books (SF, Ca) wants to host something with you in their dream booking roster if you need a place to peddle wares.

oh look there's some of the Brunner books! distracted by the signed PKD crown jewels and the lame photo techniques.

I see a lot of older books, are there any that any one on here highly recommends?

I have been thinking about getting Asimovs Foundation series but that's quite an obvious choice, so anything less obvious I'm likely to over look?

That's okay, Vaude. It's the memory of reading it rather than the prospect of reading it again. Which brings me to you, Fader209. I imagine Vaude's collection is much like mine, gathered in earlier years, very much enjoyed in those years, and saved because of the pleasure they gave. I loved Asimov when I was in my teens and early twenties, but I find the books dated and somewhat unimaginative now (that's not to say they were so at the time). Nothing dates quite so fast as SF.

i recommend Asimov's non fiction over his fiction, some of it is non-dated and less dogmatically musty.

btw on Laumer, did you know there was a movie based on a story he wrote? The Monitors. gotta see this.

That is quite the list you have there!
I shall refer to it in the future when I'm hunting down more books to add to my rather slim collection.

As for older books I do have I did enjoy reading The Forever War by Joe Haldeman (1974). That was part of the "SF Masterworks" collection of books along with PK Dicks Do Androids Dream of Electric Sheep, but again that book is another insanely popular choice.

love Forever War, but would take Make Room! Make Room! or Deathworld-Harrison and maybe A Gift From Earth- Niven over that as an off the top of my head reread. Forever War i dont think i will crack again.

there's so much to remember i have to do it alphabetically when people want a list and i have a pen only as a reference.
cant make a complete list because a lot come from libraries. the foreign stuff is hard to buy domestically, often, and i have to hit the inter library loan.
looking hard for Auschwitz of Oz for it's reputation. impossible in the U.S.

on "Do Androids..." what a great movie that would've been if they had stuck to the book instead of turning it into a Spillane detective movie from the FUTURE (barely). the setting was well put together, but Ridley Scott didnt finish the book (and didnt get the gist of it obviously). whatever. it looks more interesting than l.a. now and that's one of the reasons i've watched it a few times.
i'm ranting in the rain.