The Blade Itself -- Joe Abercrombie 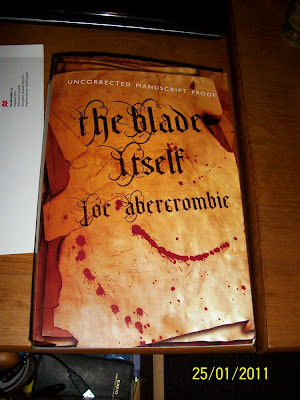 When, on the first page of The Blade Itself, a major character went ‘Eeek!’ as he avoided a spear thrust, I nearly put it aside. My feeling was one of, ‘Oh FFS, not another fantasy with a central silly character who bumbles through the plot tripping over his magic sword squealing and running away then managing to destroy the [insert relevant baddy] through pure luck.’ But the writing was engaging and I carried on. This particular character developed into one who really wouldn’t go ‘Eeek!’ so I wish an editor had had the presence of mind to strike a line through it. The other subsequently introduced protagonists were also well-developed in this character-driven fantasy, which reminds me of some enjoyable stuff I’ve read in the past. If you want comparisons I’d say about 70% Eddings and 30% Gemmel – a sword-swinging romp. The book did seem to terminate rather abruptly, but then it is the first book of a trilogy, which I think is well worth a look for fantasy fans. I just apply my usual rules whilst reading: Am I bored? No. Am I enjoying myself? Yes. Will I buy the next two books? Yes.

Before They Are Hanged

The Last Argument of Kings

Update (From The Man Himself):

The irony is, that eek isn’t in the published book, only in the proof. My editor did indeed strike her line prior to publication...

But many thanks for the review. Be interested to hear what you think of the rest of the trilogy if you do get round to it. I reckon it gets better and better.

But then I would say that, wouldn’t I?

Replacement words for "EEEK" in this instance of dodging a spear thrust:

And instantly I have changed the lead character into Roger Moore.

fuuuuuuuuk.
just finished WORLD ENOUGH AND TIME by James Kahn. this was a hobo bitch to track down, but what a yarn!!
as far as apocalypse time in books, after the nuke, this one is very unique. somewhere between DAVY and THE EINSTEIN INTERSECTION. you sure pick em. thanks again for this recommendation. other than a scooby doo moment (we showed these films to create an effect..). no bad words were written here.

notice he wrote crap for Geprge Lucas, probably how he got the 'clone wars' "idea".

Vaude, I think I've read World Enough about three or four times. I love it.

My favourite fantasy series for a while, is the Malazan book of the fallen, by Steven Erikson.

I've been meaning to check out Abercrombie. Definitely seems worth the effort now.

The first Abercrombie trilogy is great, he seems to really like torturing his characters, but the standalone "best served cold" that is set in the same world but uses secondary characters from the first trilogy is just fricken fantastic. Think Kill Bill set in medieval spain with flesh eating wizards, well worth a read.

Yes he's very good, one of the new Brit fantasy writers to match the Sci-fi ones that have seemed to pop up lately :)

In fact, I just got an email from Amazon saying they have despatched his latest to my house, 'Heroes' is on its way!

I love Joe's way of writing what people think. I also agree Best Served Cold was great. A really well put together book. Predictable but so enjoyable to read.

I've ordered the next two in the series (along with George R R Martin's Game of Thrones since I haven't read his stuff either). Also, it's interesting to see that the 'Eeek' didn't make it to the final version!

Joe's books are the best fantasy series I have read, bar none. I agree that the stand alone is his best so far. With certain reservations, I would say that his books are the fantasy equivalent of an Asher sci fi novel... :-)

I've read all three of the trilogy and also his standalone 'Best Served Cold' which takes place in the same fantasy world and contains a character or two that you'll recognise from it. All the books had me enthralled and I can't wait to read his new one, 'The Heroes'
That 'World Enough And Time' looks interesting too, I might try and get a copy. But first of all I have to finish Mieville's 'Kraken' which I'm finding a slow read and then onto 'The Technician'!

I note that Joe Abercrombie is doing a signing in Forbidden Planet London tonight from 6.00PM.

The Technician has grabbed me right here around page 160. the quote Dawkins type quote 'mysticism explains what you dont understand of reality.' i bookmarked (lost it) and misquoted.

what a treat Penny Royal is. i want that nightmare to fuse me into a gazebo for bats. i knew her when...

Found World Enough And Time on Amazon and ordered it :)

Vaude, glad you're enjoying it.

It's an excellent book, Bob. The sequels aren't so great though.