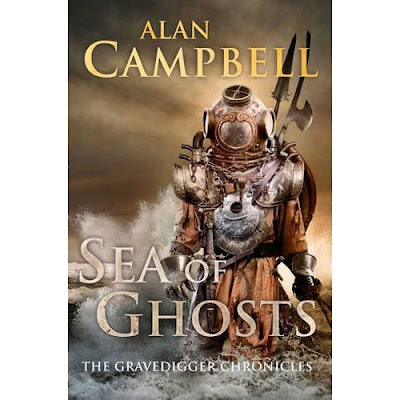 The sea bottles are bubbling away under the sea, each seemingly a gateway into another world, steadily raising the sea levels with brine whose touch will turn your skin to shark skin. The artefacts of a recently fallen alchemic and magical dictatorship lie under the poisonous waters for anyone brave enough, or insane enough to retrieve them. Steamships and sorcerous weapons abound, along with other fascinating devices in a steam/punk/fantasy world. Dragons are addicted to what can only be described as post human food. A madman conjectures about quantum physics and sorcery sources…

Sea of Ghosts is wonderful meaty stuff from Mr Campbell again – he’s a true original. When I read Scar Night I felt the same: fascinated by the ideas, by fantasy that’s stepped well away from the norm, and by the nuts and bolts of his world. I’m not highly interested in labels, but if you want to read something that definitely isn’t a Tolkien clone or even a close relative, something that engages you from page one and never lets go, this is for you.

Over on his blog last September Alan tells us:

Today I noticed that "Sea of Ghosts" is available for pre-order on the interweb. This is the first in a new fantasy series, which I've had the luxury of planning in advance. I have actually finished writing it, but it's not available until April next year, so you'd have to be utterly mad to order it now. The story begins with a man compelled to imprison his own family, and then head off on a high-seas adventure, dipping a toe into dragon territory, with a quick nod to Nikola Tesla. The wonderful cover art is by Larry Rostant.
Posted by Neal Asher at 9:22 am