Good post here over at Autonomous Mind. So when can we get rid of the licence fee? Or rather, as it should be correctly titled: the propaganda tax for the Labour Party. 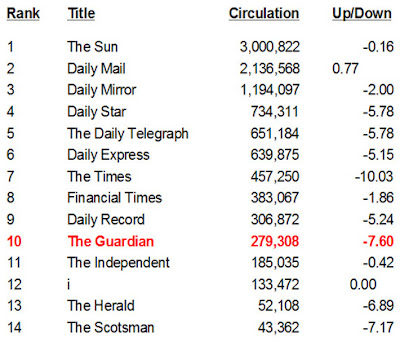 When you look at these figures it is easy to see why the BBC should account for the disproportionate number of television and radio appearances by journalists from the Guardian. When given a choice of a national newspaper we can see that out of an average 10,197,331 copies sold each day during January 2011 (including bulk buys) less than 280,000 copies in the UK were the Guardian. That represents just under 2.74% of national circulation.

Additionally:
By far the most popular and widely read newspapers at the BBC are The Guardian and The Independent. ­Producers refer to them routinely for the line to take on ­running stories, and for inspiration on which items to cover. In the later stages of my career, I lost count of the number of times I asked a producer for a brief on a story, only to be handed a copy of The Guardian and told ‘it’s all in there’.
Peter Sissons.

And more here over at Biased BBC:

"The idea of a tax on the ownership of a television belongs in the 1950s. Why not tax people for owning a washing machine to fund the manufacture of Persil?" -- Jeremy Paxman

"People who know a lot more than I do may be right when they claim that [global warming] is the consequence of our own behaviour. I assume that this is why the BBC's coverage of the issue abandoned the pretence of impartiality long ago" -- Jeremy Paxman

"I do remember... the corridors of Broadcasting House were strewn with empty champagne bottles. I'll always remember that" -- Jane Garvey, BBC Five Live, May 10th, 2007, recalling May 2nd, 1997.

Note: The date at the end here is when New Labour won the election.
Posted by Neal Asher at 11:35 am

Email ThisBlogThis!Share to TwitterShare to FacebookShare to Pinterest
Labels: In the News, Politics

70% are made up by the Mail/Star/Mirror and Sun.

Can't see the BBC going to these papers for accurate current affairs.

The Beeb shouldn't have to get copy from other newspapers. Once-upon-a-time the paper would have taken their lead from the BBC. The BBC being a by-word for proper journalism.

They're all feckin lazy now. They take their facts from Wikipedia and their stories from Twitter. No need to step outside the ivory tower anymore.

If you have to watch commercials, they shouldn't be taxing you for it.

And your papers have good names such as..?

They shouldn't be going to any papers, Stu. They get billions in funding and, as we know, have reporters all over the world (now over to our correspondent on the Isle of Wight). But they are heavily biased towards the Guardian and the sound of the BBC is guardianistas agreeing with each other. If you read through just a few of the posts on that Biased BBC site you'll see what I mean.

Well they aren't all call the Daily -blank-. Being able to tell papers apart is a huge step. Some of ours are even named for their political bias.

(who own the times and are killing it by making it subscription based).