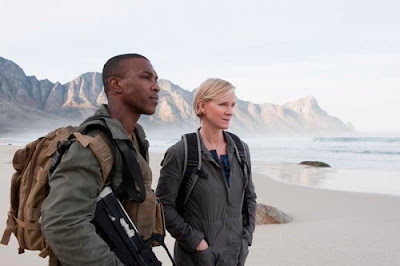 Well, I watched the first episode of Outcasts and I’m finding it difficult to summon up the will to make a coherent criticism of it, but I will strive to do so. It was dreadful and dull. I was reminded of some of the dry history tomes I’ve tried reading. In the past I’ve really wanted to find out more about the Roman Empire, the Aztecs, the Saxon Kings whatever, and on just about every occasion I’ve been defeated by how the historian concerned managed to turn an exciting and interesting subject into something as dry as dust. Here in Outcasts we have the colonization of a new world, the landing of an interstellar spacecraft, intrigue, murder, weird things in the woods, and it grabbed me about as tightly as a dead octopus.

But I guess those history books were different. Boring they might have been but they never made me cringe.

But why was it so bad? It spent far too much time having people emoting and sobbing at their computer screens; it spent far too much time ‘character building’ but not in a good way; it is obviously getting wrapped up in right-on human issues, man. The entire plot can be summed up as: having a bad time, latest spacecraft crashes. And it was obviously another spacecraft coming direct from planet North London.

Oh yeah, and apparently they’re on a world with a breathable atmosphere where parallel evolution has produced pine trees and grass. Apparently Earth has been rendered uninhabitable, though meanwhile they managed to put together an interstellar space drive and colony ships.

Nice replacement here for the awful Survivors, and it’ll probably get dumped just as quickly.

I really wanted to like this - the adverts had lured me in, but like you said it felt slow.

I thought the animation of the ship looked really good at the start - much better than BBC stuff normally looks to me, but then the leader said the ship was in orbit while the screen showed it to be some way away - I was haulled out of the moment, so to speak.

I just wanted them to actually say WHY Earth was abandoned - they were obviously trying to hold that in suspense but I didn't feel it.

Also - they killed off the only character I was actually interested in!

After 30 mins I was losing the will to live, so I won't be watching any more of that.

Wow, you were actually interested in one of the characters Osh? I felt nothing for any of them. Incidentally, the similarity of the two characters you mention is probably only because they both come from the Hollywood clone factory.

Phil M, I tend to abandon things too quickly so I decided to stick it out to the end. Did you? Did you hang on for that cringeworthy 'I can see Carpathia from here and it's beautiful' (or some such), just before the ship captain got fried.

I recorded Outcasts with a view to watching it later this week. I may now delete it instead. I had high hopes, but it sounds very disappointing.

I watched (most of) it on the iplayer. It's obvious this has been made for the suits and committees at the BBC - to meet with their approval and their criteria - rather than for any viewer. The script is full of inane statements and info dump.

I did note that when he was asked if he had any VIPs on board the captain of the ship mentioned a Climatologist. I think this is going to be as hilarious as The Deep - but I don't know if I could actually watch more of it.

I agree with Osh. I really wanted to like this--but I found myself fast forwarding through the "talky bits". It turned a 60 minute show--sans commercials--into 35 minutes.

What I really can't understand is why they (the show producers) made a big deal out of casting Jamie Bamber--from the excellent Battlestar Galactica--and then they went ahead and killed him off. If you're casting a big name in an effort to bring in viewers shouldn't you...maybe...keep that actor on the show?

Sean, this is the BBC. Quick, kill the white alpha male.

Mis-matched technology levels.
Clothing and preparedness for external expeditions.
Weapons still basic ballistic, despite nice paint jobs.
No ground vehicles for going searching "WTF is that all about".
Stupid dream machine.
Fenced enclosure for city, and no apparent agriculture, but they can produce their own beer.
Children succumbed to a disease, and clearly got booted out, these I suspect are the outcasts that are also the night time tent raiders.
Expeditionary live in their own community outside the main community.
Angst ridden psych doctor thingy person has sex with random, jolly paddy bloke with black market links.
A ship that can travel many light years, but can't make a safe descent and has to leave its habitation rings behind.
Stupid twattery Mr Asher mentioned that el capitan can't see the fucking great ball of rock he's heading towards until he's burning up in the atmosphere.
Not enough escape pods for everyone.

I could go on, but to be entirely fair I can't be arsed. It was shite and the BBC can't do SciFi, except maybe Dr Who, and even that is lame nowadays.

And at the Telegraph they also think it was a stinker.

Interesting reading that review and the ensuing comments, Graeme. There was a lot I found despicable about Outcasts (and other BBC productions) but decided to ignore in favour of noting how boring it was. I've got enough of a rep as a ranting libertarian, and I get tired of pointing certain things out.

I was gonna watch it but forgot it was on, seems that was a good thing!

I went in not expecting much at all so i wasn't disappointed. Personally I could forgive the ecology, i could forgive the clothes, hell i could even forgive the stereotyped characters (all forgiven in light of TV limitations) but i really can't forgive the idea that a ship built to cross interstellar space for five years carrying hundreds of crew can't FUCKING LAND!

And why would they want to go down so soon? why not keep the ship in orbit to act as a space station, christ its been five years if it takes a few weeks to repair your shitty shuttle then do it!

The second worst plot hole for me was the matter of how the hell mankind suddenly gained to ability to colonise space? It's one thing sailing to another place on Earth but how did they manage to ship an entire industrial complex with them?

It takes tens if not hundreds of millions of people working in every industry from all over the world to maintain a developed world country (we're an incredibly specialized species in terms of labour)i don't see how fort-whatever could have built its computers/homes/weapons etc without having mines for the rare metals, platforms for oil for plastics, chemical factories etc etc etc

Boring. Badly written. Badly acted. Lines delivered in dead monotones. No emotional engagement with any of the characters. Pathetic, pointless (because nobody really gives a shit!) attempts to hold back information (e.g. what happened on Earth? How were the colonists chosen? What exactly happened with x, y and z? etc.). Nothing even remotely “alien” about the alien world. Zzzz…

P.S.: Reading older sci-fi while waiting for the next Asher. Currently about half-way through the NEFSA Press Edition of Cordwainer Smith's Rediscovery of Man.

This is what John Clute of Interzone had to say about him: "First, genuflect, genuflect: The Rediscovery of Man collects between one set of covers all the short fictions of the unmatchable, unthinkable Cordwainer Smith. All are magnificently weird, most are plain magnificent, and one or two are the nearest thing to perfection that you or I will ever chance upon in our little lives."

Wow - Why can't so-called "sci-fi" dramatisations capture some of the strangeness, poetry, and brilliant originality of written sci-fi?

I have Norstrilia lined up next.

No, Neal, 30 mins was my limit, I found the characters/setting to cliched. Wish I'd stayed till the end to see the Captain get it as my first thought on seeing him, "how did he get command, he's so wet, he won't last the episode"

dissapointed they killed off Jamie Bamber so quickly (and very wierd to hear him speak with his actual accent), but they lost me as soon as lemonface from Spooks showed up on screen..

as you said, it was a snoozefest. didnt even bother watching the 2nd episode..

- ugly betty guy is the sociopathic religious leader of the new colonists (he also stole someones place on the escape pod so they died and their daughter is pissed)
- one escape pod flew off course only to be found by the outcasts
- emotional police woman (EPW) and some soldiers go to get back a kidnapped survivor, thanks to EPW they loose all their weapons
- the outcasts are actually genetically engineered super clones made at the start of the colony to test what genotypes best survive
- these ACEs (acronym for something) were believed to have caused a plague so were ordered killed, they escaped
- lastly the planet seems haunted by alien ghosts who like to move pictures around

So much better than Outcasts and on the same line of Sci fi; Intrepid explorers go to new planet with breathable atmosphere, suffer hardships, some people die... but some people come back to life, there are grendl like aliens, aliens that can move through rock and earth etc etc.

But yeah, it wasn't good enough to pull me away from my computer screen. Second episode peaked my curiosity a little bit (the 'wife' apparently likes it, which shows the amount of sci fi indoctrination i've been successful with!) when they mentioned some genetic engineering but I quickly went back to my PC stuff.

Thank God for that! I was worried that I was going to be only one who thought it was a dismal and p*** poor excuse for a sci fi program!

If anyone cares anymore, here's the review from SFX magazine.

Excellent review from SFX, Phil. I love the opening paragraph:

"It’s rather surprising that the opening shot of Outcasts features a spaceship in flight, since all involved seem very keen to reassure us that it’s not really science fiction, presumably for fear of scaring off a mass audience that can deal with the adventures of an alien with two hearts who travels through time in a telephone box, but might be put off by the idea of something set on another planet."