Mark Chitty finally got to the last in the Cormac series: 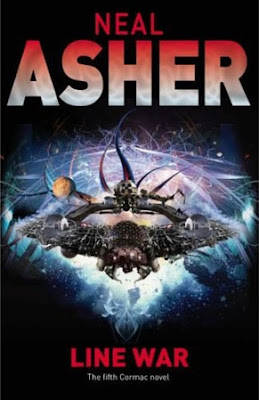 Finally I've come to the last Agent Cormac book, Line War, and up to now it's been a ride of ups and downs. The first two books, Gridlinked and The Line of Polity, were rather enjoyable, but they did have their issues. After that came Brass Man and Polity Agent, both of which upped the stakes and delivered some really great sci-fi. Now with Line War the story comes to a conclusion, and while it ends the series as a whole I always had that niggle of a doubt in my mind that it might not be as spectacular as I hoped. All totally unfounded of course, as Line War not only closes the series in style, it is one of the best books I've read in quite a while.

Line war on Amazon and on the Book depository.

Update (I just have to add his summing up):

On a final note, the Cormac series is perhaps one of the best overall examples of sci-fi I've had the pleasure to read. It's got action, adventure, intrigue, alien menaces and a whole host of other things that just hit the spot for me as a reader. Neal Asher: without a doubt the most entertaining science fiction author writing today. Well done, sir!

Line War was very enjoyable. I'm just a bit saddened that i'm running out of your books left to read. Just spoke to my brother, who lives far from me and he wrote,

"I finished Prador moon last night after a nail biting weekend of alien crustacean horror. The experience really took me back to 1980's when we were living together at home, you returning from school with books by James Herbert and Guy N. Smith." Then i checked up Guy N. Smith and found all these crab books! Were these an influence for the prador?

I never read them, James. The prador come (I think) from long childhood holidays turning over rocks on seashores, grovelling about in muddy streams, drawing monsters in art classes while everyone else was drawing flowers, and then of course reading vast amounts of science fiction and fantasy.

Shush, Spencer -- that was a spoiler so I had to delete it.

I must admit Line War was the first of your novels that I've read. It landed on my desk as a review book at the newspaper where I work. I loved it enough to follow your blog, no?
;-)

I just stumbled onto your books via a chance Amazon recommendation on Iain Banks (and I only found him via a chance encounter on a review of the Kindle). I finished "Line of Polity" last night and I was gripped the whole time. I can't believe that I've only found about your writing now - where have I been hiding all these years?

Needless to say, I'm doing like Mark Chitty just did and I have all of the Cormac books queued up and waiting for me. I don't know how your books fit into any great pantheon of sci fi authors but I do know this: they're some of the most entertaining, exciting, thrilling, and all around enjoyable books I've read in years. If your others are even passingly like these last two, I'll be a lifelong fan!

Oh yeh, my bad. I guess being that its your blog i jumped the gun. apologies :)

Thoroughly enjoying listening to The Skinner during my commute. The accents used for the various characters has really given added depth to the story....loved the S. African accent for the Batian mercenaries, it fits perfectly!.

That's good to hear, Nerine. Did a review appear either in the paper or on any of your numerous blogs?

I haven't been hiding, Tyro. My whole writing career has been a slow and steady climb as opposed to a sudden arrival with a bang. Even now, as with you, people have discovered me for the first time even though my books now take up about two feet of shelf space.

Not a problem, Spencer, and I'm glad you liked that bit. As you can see, by Tyro's comment and my reply to him above, there are people that haven't got there yet.

Glad to hear that, Richard. I haven't had a chance to listen to any more than the samples. I'll be going in to the Audible studio soon to record some extras so I hope to snaffle a free-bee.

Any chance you can stick that comment over on Audible, Richard?

Neal, I can see if I can track down a .PDF of the page it appeared on. It was last year some time in the Pretoria News. You're more than welcome to drop me a mail off my blogspot profile. My details should be there.