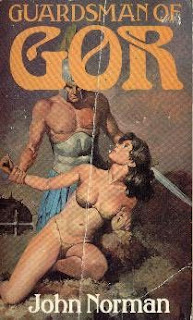 Here’s a little summation of just a few opinions about fantasy covers. Some hardened SF readers simply don’t want to know, an opinion summed up by Roger Fourt: Anyone wielding shiny sacred weapons, multiple planets/moons in the background, improbable waterfalls, ludicrous cities perched atop unscalable peaks. In fact, fantasy covers are generally off-putting, along with their trite, largely write-by-numbers storylines and nerdy pubescant D&D followers. Gives SF a bad rap by association.
Those that do want to know object to depictions that bear either little relation to what the books contains, or are, frankly, embarrassing. On covers Bob Lock doesn’t like fairies, or the WOT series as all the characters seem not to scale. They look as if they are riding Shetland ponies, nothing like how I imagined them from their descriptions, whilst Stuart McMillan opines, heaving bosoms and demure damsels keep my wallet *in* my pocket. Saying that, great chested men with giant weapons are equally a turn-off. Andy Plumbly and Chuck MacKenzie respectively don’t like the typical bright colours and a generic character on the front and 'same old' sword & sandals designs (think the 'Gor' books).
And then Andi Marment and Chuck lean towards fantasy down and dirty like weaveworld or imagica, none of that wheel of time bobbins or fantasy books (athough I read very little fantasy) with cities on the cover, but that's largely due to having read brilliant 'city' fantasies by China Mieville and .
So what can be learned from all this? What some like and dislike about a cover is usually informed by their opinion of what is inside the book. In the end, making an exception of those embarrassed about their ‘guilty pleasure’, the truer the cover is to the book’s contents the better. But then we all knew that anyway.
Of course, the sample of opinions here doesn't mean a lot. What would all those 10 to 18 year old boys think of the John Norman cover here? I certainly still like the lurid covers on some of my books and, had I avoided such covers, my reading, and enjoyable reading, throughout my life would have been cut down by about 80%.
Posted by Neal Asher at 10:52 am

This cover is why I don't read fantasy. They are so fucking naff it makes my teeth ache.

I think you hit the nail on the head when you mentioned 10 year old boys. Different books attract us at different times in our life. I think younger readers are looking for 'heroes' and as a result are drawn to the books that show archetypal heroes and heroines on the cover. As we grow up we realise that life aint so simple, we want to read more complex stories and look for more 'complex' and less obvious covers. I still read fantasy but would be drawn to the latest Abbercrombie cover rather than the one in your picture. However, I would still pick it up and have a look just for nostalgias sake! :-)

Maybe SF needs more covers like the fantasy book covers to drive sales up,hmm? It didn't do any harm when the pulps had covers of monsters abducting pneumatic women.

Incidentally Neal, I wouldn't plan any visits to Kirkcaldy; the book shops there don't like you. I posted on Larry's blog about the lack of your books in Waterstone's (Fixed now, they have four books on the shelves including a hardback and I bought Prador Moon last week) but today I bought The Gabble and other stories in WH Smith and the book wasn't recognised. The assistant tried typing in the ISBN a few times but nada; it finally went through as 'unknown bks' after consultation with a senior assistant.

Graeme, it is, admittedly, a quite old book.

Variant13, I'm guessing that better covers in the SFF world are a result of publishers finally admitting that adults read it. Though admittedly there are many in publishing who still think the readers are retarded adults.

jpurdie, it often depends on who is running the SF section in whatever shop you go into. Whilst some are enthusiasts, some haven't a clue.

I've never really been interested in fantasy. I gave Lord of the Rings a go, enjoyed it immensely at the beginning but then got bored and forgot about it. At the moment though I am working my way through some classic sci-fi including Gene Wolfe, Cordwainer Smith, Larry Niven, Roger Zelazny, Brian Aldiss etc.

From what I've read on Amazon some of Gene Wolfe's more recent stuff (I read "The Fifth Head of Cerberus" last week) is as much fantasy as sci-fi; I'm interested in the Book of the Long Sun - would anyone here recommend it?

Loved 'The Book of the New Sun' and that collection of short stories you mention, TJ, but haven't read 'The Long Sun'. If it's the same universe etc as New Sun then I'd argue that it isn't really SF.

I hadn't even heard of Wolfe until recently, but I decided to work my way through the "SF Masterworks" series,and "Cerberus" came up. I really enjoyed it and think he's a good writer, and I'd like to read some more of his work.

I generally dont pay attention to covers and I'm not a fantasy fan myself but I did enjoy David Eddings's Belgariad series and the coveres on those were nice!

I'm almost ashamed to admit I was put off from reading Dune for many years, on the strength of the cover art. Superficial of me, I know, but hey, we are what we are. On reflection though, good cover art, has led me to many well loved authors, (Michael Moorcock, for instance) whom I might otherwise never have been aware of.