N and P for Niven and Pournelle 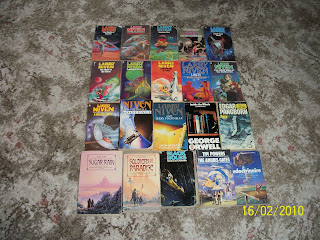 Niven, responsible for some of the best sf I've read, and the worst. I read everything of his up until around the late 1990s, when he gave us the third Ringworld book, Destiny's Road and Rainbow Mars... God, they were all awful.

Yes, I remember Ringworld Throne with a shudder, but everything else of his I absolutely loved. Pak Protectors, Pierson's Puppeteers ... excellent stuff.

Agreed. Ringworld Engineers is in my Top Ten Fave books, and some of his short story collections are up there as well, and I loved the first Dream Park book with Steve Barnes. It just seems that once we reach the late 80s/early 90s, it's hard to think of a good Niven title.

Its good to see a Tim Powers book in there, I really like the way he takes historical facts and 'twists' them in his stories.

Only read a small amount of Niven's work, Ringworld and Ringworld Engineers being up there with the best,and as others have said forget the third sequel! I also have World out of Time-first edition hardback and not a bad read, as well as Integral Trees and The Smoke Ring which I've yet to read. Oh and his Beowulf sequence,with the Grendel,just superb!

World Out of Time is so goddam underrated, i end up crying myself to sleep sometimes. i'll stand around on my porch flipping off the universe other times.

Niven, whatever his other
virtues and faults as a
writer, remains without
peer in his knack for
imagining ET aliens who
are plausibly designed
living organisms with
truly alien mentalities,
with motives and goal
little resembling those
of humans.

A Puppeteer may look like
a Centaur designed by
committee and his(?)
congenital cowardice
has its comical aspects,
but Niven convinces the
reader that the
Puppeteer's attributes
make sense by the cold
logic of Darwinian
evolution.

Please do not construe my
previous posting as casting
any aspersions on your own
work. In point of fact,
your own knack for
constructing alien flora
and fauna (and, indeed,
entire ecosystems)is one
the most appealing aspects
of your own writing.

Niven and Pournelle; couldn't really get into their work separately but loved the books they wrote together, particularly Mote In God's Eye and Oath of Fealty. Quite a bit of Priest's work I struggled to get through but I enjoyed The Space Machine and The Glamour.

I always enjoyed the sense of humour shown in some of the books.

I am shocked that The Mote in God's Eye is not there. It has to be one of the greatest first-contact novels of all time. And, the two have done nothing better since, including Oath of Fealty.

'The Mote in God's Eye' is indeed a classic, but the follow up, 'The Moat Around Murcheson's Eye' (aka 'The Gripping Hand' in the US), is best avoided IMHO!

The Moties were great fun.
Oh, and Footfall was a blast. Or rather, a stomping good read. Heh.

I'm sure I have Mote In God's Eye, must read it sometime-its a big book tho!

Michael Stone: You hit the nail on the head with Gripping Hand. It ranks as one of the biggest disappointments of my reading history.

I was looking forward to it. Then it arrived - yuck!

Michael, love Ringworld Engineers - I was given it as a birthday present not long after it came out and it's that book that led me on to the rest of Niven's stuff.

Yes, Variant13, I did enjoy Anubis Gates, but that's the only one of his I've read. Must try some more.

I think Integral Trees was one I read from the library, Larry. I don't think there's much of his stuff I've missed.

Though I may have missed this World out of Time, Vaude - I'll look out for it.

Yes, Ian, I do love the idea of us being a devolved form of the Pak protector, and the idea of herd animal cowardice behind the puppeteers. And I didn't misconstrue what you were saying in that post.

J Purdie, R F York and Owen Roberts, I loved The Mote in God's Eye, and think that the Moties owe something to the pak protectors (I think I borrowed that one from my brother). And yeah, I read the follow-up, and can hardly remember it now.

Thud, humour is one of the most difficult things to write - that's why Pratchett is so successful.

Neal did you get my email? I sent you an early Prador!