M is for Moorcock 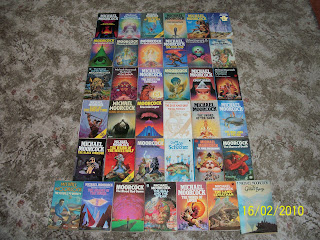 Never read any Moorcock, mainly because I'm not a fan of fantasy. I must check out hios early works though, when he wrote SF!

I guess that collection explains why you title half your books "The something" ;)

Uh? Very few of my book titles start with 'The'??

I know I REALLY shouldn't argue about the tiles of YOUR books... but I count 7 with your next two books...

great to see all the brit versions of these. one Elric similarity and the rest is foreign (obviously).

Blood Red Game is such a clunker. oof.

The Skinner, The Line of Polity, The Gabble, The Engineer, The Technician

The Voyage of the Sable Keech, The Departure
Does Mindgames count? Haven't seen even seen it listed as out of stock. I'll trade it for Africa Zero. That's still 7 out of 17, thats like 40%, close to half

I notice that you have a lot of fantasy books in your collection. I know that what I read influences me so is it the same with you? And if so why did you start writing sci fi? Have you just 'branched out' into reading fantasy after you started writing? Probably a stupid question...

hmm. Never heard of him. Considering that you have what looks like every single book that guy has written, which book would you recommend to read first?

Okay, you got me Mr M, but I reckon you'd get a similar percentage if you surveyed every book in existence.

Vaude and Variant, I hardly remember any of them - more a teens to twenties pleasure in reading. Yes, there certainly is more fantasy in my collection. When I was in my teens to twenties I read a lot more fantasy and was more inclined to collect stuff. In my thirties until now I read more SF and more non-SFF and, especially with limited space, I've been more inclined to consider whether I will actually bother reading a book again before keeping it. As such you could probably describe most of what you see in my collection is being kept for nostalgia value. A specific answer to you Variant would be no, the more I wrote the less fantasy I read.

Nikola, I read these books when my taste was for fiction was still forming. I probably wouldn't enjoy them now.

I know this is off subject, Neal, but are you going to Eastercon?

Not a chance, Bob - even if I was in Britain.

You're NOT in Britain Neal?

I am at the moment, Larry.

Had me confused there for a bit Neal: