Caroline has just got herself a new mobile phone which is so ridiculously packed with functions that you probably need to take some sort of course to work it all out. Amazing also is the size of the battery in the thing. Studying it last night, while drunk, and trying to cancel out the predictive text – she was trying to write ‘sorry’ to someone since she had texted that person a blank message, and we kept ending up with the word ‘sprout’ – I suddenly remembered some dreams I used to have.

When I was a kid I received as a birthday present one of those now archaic LED digital watches – the kind where you had to press a button to see the time since leaving the display on would flatten the battery – and later received an early Rockwell calculator. After that I would occasionally have dreams – and I mean REM sleep dreams not waking fantasies – about owning a digital watch that possessed all sorts of weird functions, and could display graphs and other types of information in colour. Strange. This was before I even considered trying to write SFF, so I guess the stuff I was reading was already having some sort of effect on my mind. We now have various devices that display information in that way, so those dreams were close to a correct prediction of the future.

Other dreams of that time were of looking up and seeing the sky full of traffic: huge quadrate vessels, like skyscrapers detached from the ground, tumbling through the clouds. Now, because the London airports are all within 60 – 70 miles of where we live, the sky is often scattered with airplanes and criss-crossed with vapour trails. Not quite there yet – we still need antigravity.
Posted by Neal Asher at 12:59 pm 8 comments:

Email ThisBlogThis!Share to TwitterShare to FacebookShare to Pinterest
Labels: Technology 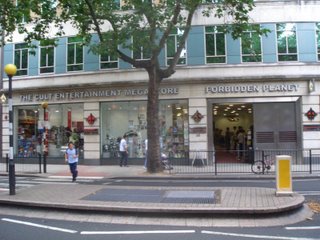 Right, back on track. There’s another ‘bit of a do’ earlier than the one at Heffers on the 2nd November. I’ll be at the Forbidden Planet in London. Now, I’ve just learned that the one I’m going to is not the only one in the city – there’s a Forbidden Planet International. It’s not that one, it’s the one with the old rocket logo at:

I’ll be there on Saturday the 7th October signing copies of Polity Agent between 1 – 2pm. If you can't make it to the signing, don't forget to pre-order your signed copy from the store. I'll also probably be chilling in the pub around the corner afterwards too.
Posted by Neal Asher at 11:52 am 7 comments:

For anyone who is in the area, there’s to be a bit of a do at Heffers Bookshop in the Grafton Centre, Cambridge, on 2nd November starting at 6.30pm. Numerous writers, including me, will be there to sign books and generally wander around and chat. Here’s the attendance list thus far: 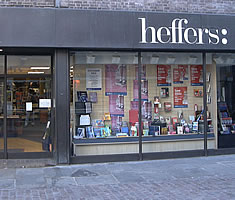 The Times They Are A-Changin'

While biking along today, reflecting on the lack of girly mags lying on the verge being due to inveterate wankers getting their fix of porn via the Internet, I was overtaken by an eighty-year-old clad in lycra and an Alien-look-alike cycling helmet. Things have certainly changed. The old boy was probably off to share a cup of green tea with the eighty-four-year-old hottie he met at Tai Chi. Back when I had less grey than dirty blond in my hair, most men of that age had popped their cogs and shuffled off to trip the light fantastic. In the unlikely event of any surviving and being able to climb onto their 40’s bone-shakers, they would have been clad in baggy trousers, tweed jacket, cycle clips and a flat cap, and be off for an appointment with a pint of Guiness and a rollie shaped like a trumpet (less tobacco in the butt you throw away). 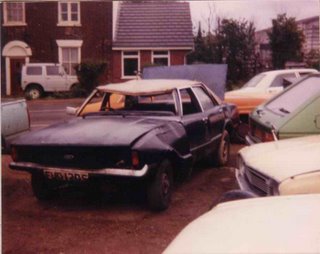 After the lycra lout had disappeared into the distance and I’d admitted to myself that my chances of catching him were remote, I pondered some other changes. Back in days of yore, in the eighties, when I went through my brief boy racer stage (this stage ended with my Mark 4 Cortina upside down in a ditch – check the picture and note the similarity to the one in the canal at the beginning of The Full Monty), girls were careful reliable drivers. Now it appears that the insurance premiums of these twenty-somethings are going up. These female testosterone addicts are now as adept at fuck-off sign language and shouting “Tosser!” out of the window as any of their opposite sex.

Other changes? Petrol was about the same price as a pint of bitter or a packet of cigarettes and if anyone had heard of global warming they would have thought it a good idea. The Internet as we now know it was undergoing its birth pangs and Bill Gates had said, “640k ought to be enough for anybody.” (Was he talking about bytes or dollars?) The music was excellent, fashion as cyclic as ever, and I was building boat windows. I was also some years away from getting by first ever story published in Back Brain Recluse.

Interesting times. Arriving at my destination, I pulled my jeans out of my socks and rolled a rollie to console myself. It wasn’t trumpet-shaped, but then I use filters. I'm thinking about getting a flat cap.
Posted by Neal Asher at 2:14 pm 9 comments:

One Rule for Them...

One of the few valid uses in this country, of 4x4s and other large private vehicles, is the towing caravans – an activity that is apparently becoming more popular. The government, however, intends to put an £1800 road tax on such vehicles, taking this activity out of the reach of all but the likes of Margaret Beckett. Their other idea is for a pollution tax on airlines. Fears that this will also take holidays abroad out of the reach of many are answered with, “But it will be the airlines who’ll be paying the tax.” This statement shows a frighteningly weak grasp of company finances we’ve come to expect from Labour.

But this is all cool. The government doesn’t want us going on holidays. It wants us working perpetually to pay endless taxes. It especially doesn’t want us holidaying abroad and spending our money outside rip-off Britain. It doesn’t want us to know about over-the-counter drugs at a third the price of the prescription charge, or about cigarettes at a quarter the price they are here, wine at a pound a litre, half price food while eating out and half price petrol at the pump. It needs us to stay and finance ministers’ foreign junkets, a burgeoning bureaucracy, Blair’s job-hunting in the US, Prescott’s non-job and the fleet of new Jaguars ministers now require (they couldn’t get the fleet of Zils they wanted). 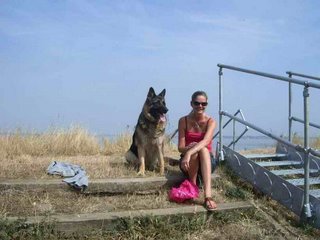 After Marjorie’s death we had to wonder what would now happen to her dog. We continued walking him on a regular basis and just made enquiries when the opportunity arose. The staff said he had become more needy since her death, but I think that might have been an illusion – he had become a lot more demonstrative over the months he’d been a resident in this old people’s home probably because there were more people fussing him. Whenever we turned up to take him for a walk, he would make a fair bit of noise and roar up and down the corridors to let everyone 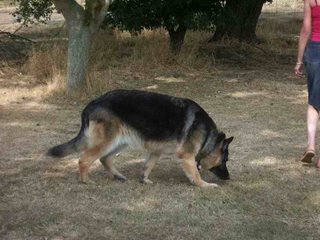 know the rest of his pack had arrived and the were going OUT. As a little time passed we heard that things might become a little difficult, that the only place for Max might be the incinerator beside the vet’s surgery. Who would be prepared to take on an aging Alsatian suffering from epilepsy?

Marjorie’s daughter and partner invited us to her cremation in Chelmsford. Though anything involving religion tends to bring me out in a rash of contempt, I went along with Caroline. The service was mostly secular with only a little plea near the end for anyone to join in the Lord’s 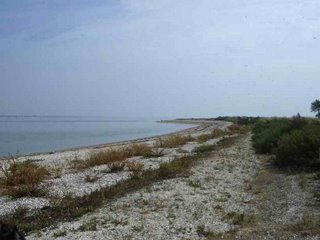 Prayer if they felt the need – the guy read it out without anyone accompanying him.

We were surprised and pleased to be given a mention for all we had done for Max and Marjorie and we learnt a little more about her. Nothing hugely surprising, but you realise on such occasions that the old woman you knew hadn’t always been old homebound and ill.
Afterwards we went along to a kind of wake in a pub in Chelmsford along with a few other guests including Marjorie’s ex-husband and partner – who had come down from Scotland. We learnt that if those running the old people’s home were willing to keep Max, the ex-husband would pay 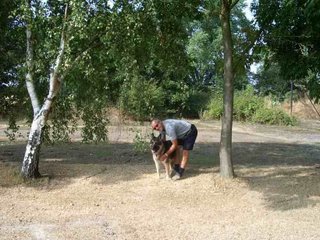 the bills. Of course, there were details to be sorted out…

Upon returning to our routine of walking Max we learnt that the ex-husband had balked upon finding out just how much it cost to keep an epileptic Alsatian in food and pills. It again looked like Max would be taking that trip to the vet’s. However, further negotiations took place about which we know few details. Marjorie’s daughter and partner took on the bulk of his care costs and we continued walking him.

Maybe, those of you who have been reading this have been expecting an unhappy ending. Well, there isn’t one. We are still walking Max and he is a much loved pet and resident of Downhall old people’s home. The end? Hopefully not for some years to come. The pictures here are from this morning’s walk.
Posted by Neal Asher at 1:31 pm 10 comments:

Email ThisBlogThis!Share to TwitterShare to FacebookShare to Pinterest
Labels: Max 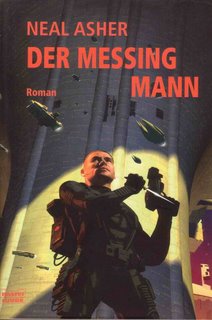 Macmillan have agreed a new deal with Bastei Lubbe in Germany for the next two books, Polity Agent and Hilldiggers. Great stuff - the German publisher is always the first to buy rights to my books, quite often without even reading them. Apparently my stuff is selling ‘respectably’ there.

The Voyage of the Sable Keech was Lubbe’s top SF Titles for its month of publication and got a half page in trade ads, whilst Brass Man got was top SF title, got a full page trade ad, and was also Lubbe's top title (i.e. not just SF) for the month overall.

Brass Man cover adjacent. Anyone recognise it? Lubbe, though enthusiastic about grabbing my books are not so enthusiastic about using new artwork. The cover of Gridlinked was Arthur C Clarke’s 2061 cover and another from one of Meaney’s books has also been used.

Other news? I’ve finally printed up Hilldiggers and given it to my parents (applied mathematics lecturer and a school teacher – retired) and a friend in Maldon (works for Marconi – smart cookie) for criticism. I’m now having a pop at a few short stories I hope to bang off to Asimov’s and Interzone.
Posted by Neal Asher at 9:17 am 9 comments: