The Line of Polity New Cover 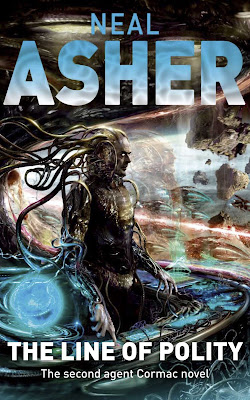 Here's the new cover for The Line of Polity. Excellent!
Posted by Neal Asher at 12:06 pm 18 comments: 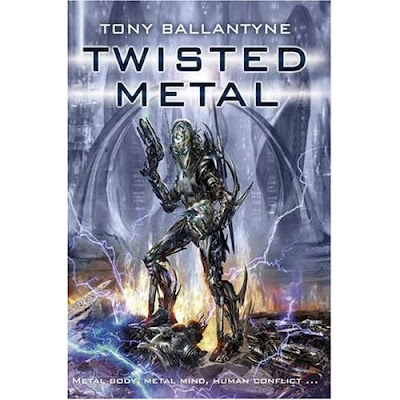 When robots make a child together the husband provides the wire for the wife to twist into the shape of their child’s mind. The wife can choose much of the shape she twists, much is inherent in her, unconscious, and there may even be fragments of the The Book of Robots in there too. The wealthy ‘free’ society of the Turing robots is threatened by the quite familiar collective of Artemesia, who believe there is only metal and the individual is unimportant (yup, the state is all). Artemesia is on the move, destroying societies, torturing and murdering citizens and then melting them down to make more citizens of its own, if not transplanting their minds into common machinery. Robots originally generated from deep in the ground and some still do so now. Or is that really true? You can feel sure that if there’s talk of watchmakers (or blind watchmakers) here the whole debate has been turned on its head.

So we’ve got nature vs nurture in the larger quandary about free will and predestination; we’ve got a Communist’s wet dream of a society because the one thing that can’t be changed in our world, can here, because the minds can be made to fit the ideology; we’ve got an inversion of the kind of arguments with which Richard Dawkins and the Intelligent Design crowd would feel at home, all set in a world populated by robots engaged in the familiar human pastime of murdering each other for power, but excusing it with dogma. Plenty of twisted metal here, usually in the smouldering ruins of of the next city state the Artemesians have torn apart. So what more could you want? The next book please Mr Ballantyne.

There’s so much implicit in the title of this book, which hints at the philosophical layers underlying but not undermining rip-snorting robot total war. A thumping good read.
Posted by Neal Asher at 2:08 pm 9 comments:

When I was about eleven my mother was a junior school teacher of the kind who used to read stories to her classes. The kids always used to enjoy the Narnia books by C. S. Lewis and, when I read them, I enjoyed them too. Now these books are being turned into films and as with many other recent films, like the ones based on the Marvel characters, since as a child I used to read the comics, or The Lord of the Rings, I looked forward to seeing this stuff from my formative years up there on the screen. I enjoyed The Lion, the Witch and the Wardrobe, enjoyed seeing the images I’d once seen in my mind translated into the ersatz reality of the big screen, but with some reservations about how the story was told. And yesterday, when we sat down to watch Prince Caspian, I began to enjoy that, until the very end, when Aslan appeared.

Wonderful special effects here, and excellent translation (as far as I can remember) of the book to the screen. The centaurs, minataurs and all the other creatures of Narnia were done superbly, nothing wrong with the acting too, though the children made me feel rather uncomfortable and I was thoroughly aware that this was definitely a children’s book. So what pissed me off? Well Mr Lewis was very definitely a believer, as his many Christian books will attest, and his religion came up through the story telling to smack me in the forehead like a mallet made from the true cross.

I guess the film producers really went with this because Aslan couldn’t have been more Christlike if he’d worn a crown of thorns and been bleeding from the paws. He came in at the end and sorted it all out – a deus ex machina Greek god lowered on his platform to sort out all the squabbles, an ending almost completely severed from the story that went before, moral message delivered: all you had to do was believe in me. Very disappointing, but then one should not try to revisit childhood. And, I guess, the original book was a piece of religious propaganda, and attempt at indoctrinating children, that just didn’t work with me.
Posted by Neal Asher at 2:05 pm 7 comments:

Email ThisBlogThis!Share to TwitterShare to FacebookShare to Pinterest
Labels: Books, Film and TV

It seems there’s been a couple of nice reviews of Shadow of the Scorpion lately. It is one of Eric Brown’s ‘Choices’ (a name very much reminding me of the time when I was submitting to Interzone and getting regularly, but nicely, rejected) in the April 4th issue of The Guardian. He says it skilfully combines graphic action and sensitive characterisation and is Asher’s most accomplished novel to date though this is on top of a Despite some infelicities of prose. I’m still trying to figure out whether he’s talking about some shabby grammar, purple prose or whether my characters say ‘fuck’ too often.

In the Friday 1st of May issue of SFX the book is five star rated and ‘SFX Recommends’. Saxon Bullock, the reviewer says of it: Asking difficult questions while delivering plenty of full-tilt adventure and widescreen action, this is top-notch stuff from an author well and truly at the top of his game.

Now you’d think that all this praise would make me big-headed … and you’d probably be right!
Posted by Neal Asher at 2:20 pm 5 comments:

Here it is, let me know what you think! 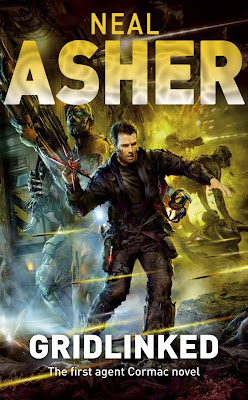 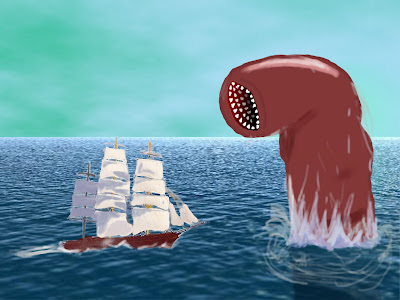 Since I read about your artwork competition, I've been thinking about things to draw.
My first impulse was drawing The Skinner, but I decided against it. In retrospect, it was a wise decision because the recent new front for The Skinner was exactly what I had in mind (Though it is far better looking than what I had started drawing)
I hope that you like the attached drawing. I imagine that a meeting with a seagoing leech on Spatterjay would look something like this.

Okay, it’s been a while since I’ve blogged here what with being on the island of Crete right now with no Internet connection here in our house, the Internet café in Sitia now a clothing shop selling expensive looking men’s jackets whilst another connection in the Status Bar in Makrigialos was just not functioning at all – a statement that also covers the condition of my brain about an hour or so later after our third carafe of white wine.

Having entered our house here to be greated with mud on the floors, water stains down a couple of walls, a strange furry object in the washing machine that might have been a flannel or a sock in a previous life, and a proliferation of mould elsewhere, things were pretty depressing at first. But, with a bit of clearing up, the Cretan sunshine kicking in, the garden dug, planted and already showing sprouts of rocket, things are gradually improving. In the intervening time I’ve taken the latest book up past 130,000 words and am on the home straight. I just need to research some stuff on the Internet, like Mars, like the effects of CO2 poisoning…

Since the only television here is obviously Greek, with maybe on English film or episode of some series each night interspersed with adverts that go on for long enough for you to not only make tea but make a sandwich, clean the windows and polish the cutlery, whilst forgetting what it was you were watching, I’ve also gone through a few books. These include three of which were each a firm index finger at political correctness and New Labour, being Littlejohn’s Britain and two by Jeremy Clarkeson: I know You got Soul and Born to be Riled.

The first of these wasn’t that great – far too many made-up songs or scripts that weren’t that funny and, frankly, enough about the insane way Britain is being run to just leave you angry. The first Clarkeson was enjoyable, what with him going on about his favourite machines, but didn’t have quite so much of his laugh-out-loud moments as The World According to Clarkeson. The second had those moments but since these were Top Gear articles in the main, they went on to stuff about 0 to 60, bhp and the like, and I started to lose the will to live. Some science fiction next, I think.
Posted by Neal Asher at 12:42 pm 2 comments: