It’s been a while since I posted a blog on here so time for some catching up. Here’s one I wrote but didn’t post back at the start of April:


Yesterday afternoon, while during a rest from gardening I sat under the tin roof of the kazani drinking a cup of tea and chatting with my neighbour, Anna, the sky darkened and a downpour arrived. After a while, I went inside, lit up my stove and lost myself in Simon Scarrow’s The Eagle’s Prey. A little later, I had to close the window shutters and turn on the lights. Such is the design of the windows to fit the 2 feet thick walls of this house – the shutters opening outwards and the windows opening inwards – that rain blown against the windows quickly works its way through and runs down the walls inside the house. 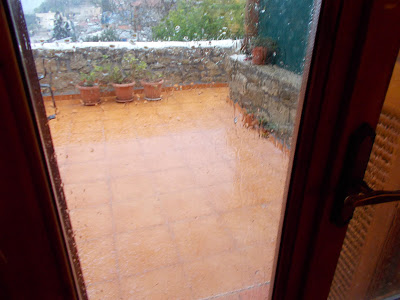 The downpour continued all afternoon and throughout the night. This morning, during a pause, I went outside to gather some more wood from my meagre supply, hoping to get it dry so I could light the fire again. As I tossed the faggots of olive wood into a beer crate it started raining again, heavily, and I thought I would get soaked. After a moment it then impinged that I wasn’t getting wet. This was because the rain was bouncing off me. 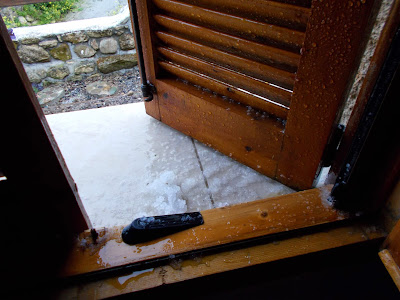 Only as I got back inside did I remember that the sound of the rain against the shutters throughout the night had often been a clattering rattle. I put my tardiness in realising that a lot of that rain had been hail down to still being thoroughly knackered from the 10 hours of gardening I had done the day before the downpour started. 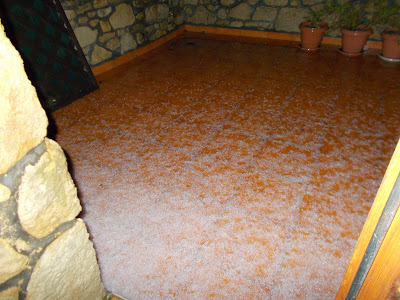 Meanwhile I need to buy another expensive load of olive wood to keep this place warm.

I will shortly attempt to include pictures with this post, but haven't been having much success...
Posted by Neal Asher at 4:22 am 3 comments: