Many years ago, when I was sixteen, the landlord of our local pub came down for a weight-training session with my brothers and I in my parent’s garage. It came out that it was my birthday, whereupon he said, ‘I didn’t hear that’. I’d been having the occasional beer in there from the age of 14, and the quantity had increased over the next year once I got a weekend job. From that point on I was a drinker. Pubs were where I went, playing pool and darts and chugging back booze. In my late 30s I hit the point of having a few blackouts from booze – around about the time Stella Artois and Diamond White arrived. When I hooked up with Caroline, pubs ceased to be so interesting, but the boozing continued at a lower level at home. It increased again when I entered the publishing world and my first editor introduced me to good red wines. But I drank everything: bottles of whisky, gin and tonics at one time out of pint glasses, sherry, craft beers – name it and I’ve drunk it. When we got our place on Crete even more drinking kicked in: chilled white wines, Metaxa, raki included with all the above. 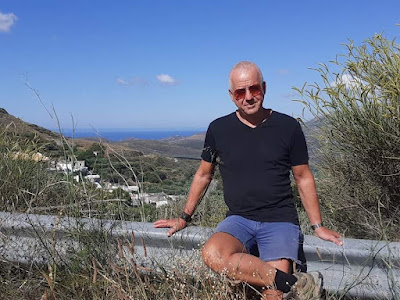 This continued for a few years but, as with smoking, I was starting to feel the negative effects. With smoking I started with unfiltered roll-ups, moved to filtered when I started to get chest pains in my 30s, then in my 40s tried giving up or delaying the first cigarette with NRT when the pains returned. By the time I was in my fifties I was using inhalers often and perpetually fighting to stop. All change occurred when Caroline got ill and died. We found ecigs and were quitting – a hiccup in that occurring while she was dying. After that I went back on ecigs pretty much full time – barring occasional depressive episodes. The drink I stopped directly after the cremation because it seriously exacerbated depression and anxiety. I started walking then to ameliorate that too – going from a few miles a day to 7 or 8 miles a day. In that first year I walked over 3,000 miles.

As the depression and anxiety faded, the booze oozed back. A year and a half after the death, I experienced ‘delayed onset grief’ and stopped it again. This finally passed and I went back to it but at a fairly low level. I was also doing a lot for my health. I was still walking a lot, I started weight training, on Crete I would often swim for miles over a week and I took up ocean kayaking and now, in the summer, do 10Km every day. I experimented with fasting, fisetin megadosing, nootropics and supplements. For three years I stopped going to Crete and during that time had a non-drinking girlfriend so pretty much stopped then too. Returning again, I started sliding back into my old habits. I knew now it was stupid; that the hangovers were getting longer and that I certainly must be damaging my body. It was ridiculous that I was doing so much good for my health then screwing it with this one habit. 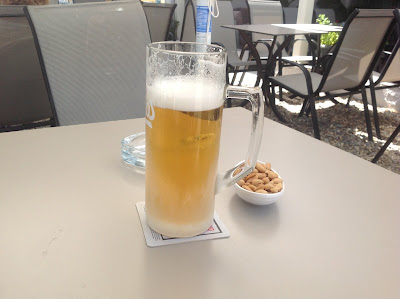 For the last couple of years I recorded how much I drank and frowned at the result in my journal. It was pretty much constant – periods of more than a week sober being rare. This year, in the middle of last month, I went out on the kayak then came back and had a beer. I didn’t enjoy it – in fact for some time my enjoyment of it had been diminishing. Instead of beer I next had a glass of red wine because, well, that’s what drinkers do. This then proceeded into three half-litre carafes of wine. Over the next three days I felt like shit: depressed and anxious, acid stomach, no motivation etc. And once again I laughed hollowly at my ‘never again’ attitude. However, this time it stuck. I recorded the days of zero alcohol. A week later I had a severe stomach upset – 3 days of diarrhoea lost me 5 kilos of weight. Everyone said it was a bug but, reading up on this, I discover an interesting fact. You perpetually damage your guts with alcohol. When you stop they start healing and this can result in precisely what I had. For a few days I had periods of low mood at about the time I would usually have had a drink. That passed and I just kept stacking up the days. 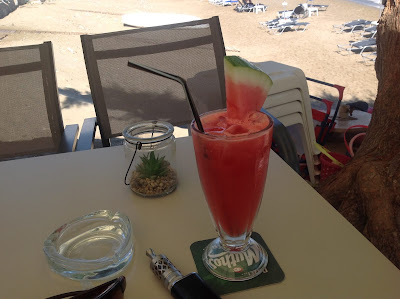 One thing that had been holding me back from doing this was that I kayaked from a beach bar – Revans. What would I drink there? Fruit juice is bad for you and I had convinced myself that it was equivalent to drinking beer in terms of negative effects. This was bollocks, as I was soon to learn. I drink melon juice, cold coffee, orange juice and soda water. The visit to my favourite restaurant the Gabbiano worried me, but turned out to be fine: I drank water. I also learned that Marco – the guy who serves the booze – hasn’t touched it in years. Today, I will be writing in my journal ’52 days zero alcohol’, and now it’s time to talk about the results of that. 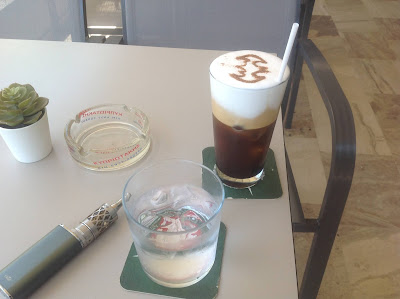 Last year I got incredibly itchy skin on my arms and shoulders – an itch so intense I could have stuck a knife in it to make it go away. This year it had started again. I of course researched this and connected it with sun damage and maybe pinched nerves in my back from kayaking. Funny how we delude ourselves. After a week of no booze it went away and has not returned. Pretty obvious really, the itchy skin liver connection. I also used to get a lot of spots on my back and shoulders. They have faded away. I often suffered from a bloated belly. It’s all but disappeared. I often suffered with insomnia and would wake in the early hours of the morning, then struggle to get some more sleep after being up for an hour or two. That’s stopped. I sleep for six to seven hours straight through. Frequent urination as of a prostate problem has gone away too. I’ve got my shit together. Sorry, it is what it is: clear distinct turds in the toilet bowl water rather than dissolving cow pats. I have more energy, every day.

Other effects have been on mood. Anxiety and depression have been with me for years. I would have periods of low mood and low motivation I normally cracked with exercise. They still occur but are less frequent now. Anxiety always took an opportunity to rise. Just doing my accounts and dealing with mail from my accountant would bring it up along with a reluctance to face doing what needed to be done. This is simply disappearing. I just get on with things and have gained perspective on it all. Why the fuck am I worrying about paying more tax and getting involved in more tax complications when they’re actually the result of me earning more and more year on year? My thinking is a lot clearer. This is also having an effect on the writing, on learning Greek, on dealing with shit. I’m writing more, I’m learning more, I feel like I’m making progress and not spending time alleviating the pain of existence. I feel a lot stronger both physically and mentally.

Of course now I must do the ‘however’ though it is probably not the one you would expect. In some respects here correlation is not causation. When I didn’t like that beer in Revans and when I stopped after those three carafes of wine, was I already undergoing the mental changes I detail above? I’ve been watching self-motivation/lifestyle videos on You Tube as a result of dissatisfaction with my life as it is. Maybe a portion of the mood effects are connected to that – not all of them. Maybe the time for change had simply arrived. But I cannot deny the physical effects.

Anyway, I will continue. I am not going to bang the temperance tambourine and say I’m never drinking again. I’ll just say that I am a work in progress.