I see that it’s been two months since I last blogged. So, time for an update. 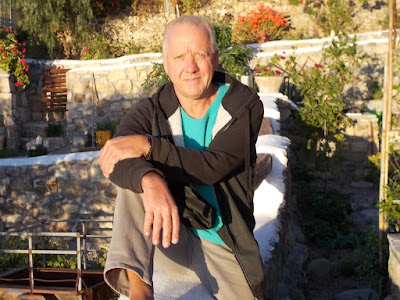 I’ve been doing plenty of walking in the mountains and I’ve been taking my kayak out for runs up and down the coast. It’s not yet been warm enough for swimming and frankly I haven’t had the energy. The weather here has been odd: clouds and sunshine interspersed with periods when we have been swamped by Sahara dust. A few times outdoors it has looked like a sepia photograph. The stuff gets everywhere and with it continuing there seems hardly any point in cleaning my car, though occasionally I wash down my terrace to stop tracking the stuff into the house. Today is windy and cloudy and everything is covered with that dust. Even my Greek neighbours are now saying, ‘Come on, it’s the end of May, where’s the sun?’

Though I have been walking and kayaking my energy has been low. This is due to the panic/anxiety attacks. They now mainly hit me in the morning as I try to catch an extra forty winks. It is almost as if my mind is fleeing from something that occurs while I am asleep. I have noticed I’ve been having more nightmares. Some do involve Caroline but generally they just involve fear. I had a couple that I used to have decades ago – involving a flood I am trying to escape and then seeing a mountainous wave approaching and thinking, ‘Fuck it, I‘m dead.’ Apparently nightmares like these are quite common. Anyway, since I am of a scientific turn of mind, I started to recording my ‘bad moments’ and plotting them on a graph. Thankfully the trend is downwards.

About seven weeks ago I got book III of the Transformation trilogy back from the editor and have, intermittently, been going through that. I would normally bang through this stuff in a week or so but, for perhaps the first time ever for me, I saw a deadline looming. However, I’ve finished with the edits and now there is a just a little wrangling to go through about the title. Hopefully, after I dispatch this back to Macmillan, I’ll be able to get back to some writing.

That’s all for now. I’ll try to update this more regularly.
Posted by Neal Asher at 4:19 pm 7 comments: