I’ve written about this before but I think it worth going over again to clarify it in my own mind and for the interest of others.


Over the last few years I’ve read a lot about longevity and increasing healthspan. I’ll admit this is not for the usual reason I read science articles (grist for the writing mill) but for selfish reasons. Like anyone of my age (now 58) I am at the point where, for some years, I’ve noticed things are beginning to break down. Over five years ago I was a drinker and a smoker. In my thirties when I drank excessively and didn’t really suffer hangovers, but they came and steadily grew longer. At one time I smoked rollups without filters. Chest pains introduced filters, then nicotine gum in the mornings to delay the first cigarette, and an inhaler to open up my airways so I could sleep. Anxiety and depression kicked in after the death of my wife. This stopped the drinking because alcohol is a depressant with the aftereffect of anxiety, meanwhile a bigger focus on health along with the arrival of the electronic cigarette stopped me smoking.

My health improved markedly from stopping these and from years of exercise to counter the anxiety. My anxiety waned and this steadily revealed that even with the improvement in my health, aging was having its effects, of course. Throughout this time, for the anxiety and looking for health improvements, I investigated and took all sorts of vitamins, herbal remedies and nootropics. This led into reading about longevity and healthspan, whereupon I discovered stuff about senescent cells and the substances that target them, senolytics.

A senescent cell is a kind of zombie cell. It goes wrong and instead of entering apoptosis (cell death) it goes into senescence, which means it won’t die but it also won’t replicate. The theory is that it does not sufficiently broadcast its damage for the body to destroy it; that the partial shutdown is a response to prevent it becoming cancerous. However, in that state it produces inflammatory chemicals that disrupt healthy cells around it. More and more of these accumulate as we get older and scientists are steadily revealing them as a root cause of many of the diseases of aging. If only we could take something to kill them off. . .

A gobsmacking study on mice appeared. It had been discovered (somehow) that a combination of the cancer drug Dasatinib and the supplement quercetin were a senolytic. When given to aged mice their health improved markedly throughout their bodies and it extended their lifespan by 36%. Many people began experimenting with this combo and I too considered it. Unfortunately trying to get hold of Dasatinib is a risky business since it is prescription only. There are many places that sell it, especially in China, but will you actually be getting the real deal? I’ve also yet to see much on any positive effects from the self-experimenters. I put the idea aside, since I’m not dead yet, and continued reading.

After the success of the above combo (in mice) researchers began looking for other senolytics and testing them. Two were highlighted: fisetin, a flavonoid like quercetin but found in strawberries and piperlongumine a constituent of the long pepper. Fisetin it turned out was better than Dasatinib and quercetin, it also has no known ill effects when taken by humans and is a supplement you can buy. I read the mouse study and made the calculations – there is a formula to convert from a mouse to a human based on skin area. It turned out, that to do the equivalent of the mouse study in me, I would need to take (roughly) 640mg of fisetin per day, with some form of oil since it is lipophilic, for five days. I upped this to 1000mgs for maximum effect.

At this time I had also had further health improvements through fasting two days a week and dropping a lot of fat, getting some better sleep through using melatonin, and was still taking a variety of supplements on top of that. I also became a regular gym goer. So one must judge anything I write about this with caution. In no way have I conducted a carefully-moderated clinical trial. At the time I also found it difficult to recover from my work in the gym. I felt very tired all the time. I dressed up my response to this as ‘power napping’ but really it was an old bugger needing to take a snooze. I took a couple of courses of fisetin as detailed, over a few weeks, and felt particularly rough each time – like I was developing a cold – a had anxiety (maybe a nocebo effect since I aimed to kill certain cells in my body). Afterwards I just ate well when not fasting. Had it done anything? I thought not, and I thought that even if it had I might not notice effects. However, some weeks after this I noticed I no longer needed my power naps. This could have been an effect of fasting, or the melatonin or something else I was taking. It could all be placebo. But I found it encouraging enough not to dismiss it, and maybe try it again.

What percentage of my senescent cells did it destroy, if any at all? How quickly do senescent cells build up in the body? These are questions I simply cannot answer. I decided to try again on the basis that I probably still had plenty of senescent cells in me and the side-effects aren’t too nasty. Last Sunday night I took my first dose. On Monday I took another while fasting through till Tuesday (beginning with a dry fast of 16 hours) – 40 hours in total. I took doses through until Thursday. I felt particularly rough. I had symptoms of a developing cold again, a cold sore attempting to break out, feelings of extreme cold even when eating (so not an effect of fasting), a crappy mood and a lot of anxiety. I needed to have a sleep during the last day and that lasted two hours, followed by eight hours that night. I am now into my first day without a dose and am recovering quickly.

Again I must make the point that this is in no way scientific. However, I simply cannot put the nasty effects down to anything other than the fisetin. This is also confirmed by someone else who has done the same as me. Perhaps such large doses just fuck me up big time and kill no senescent cells at all. But worth a punt. I will see in the ensuing days and weeks if any positive effects are noticeable. Meanwhile I look to the increasing number of biotech companies developing their own senolytics and putting them through trials.

A Couple of Short Stories Published.

Again about stories I recently wrote when I had time to spare from work on my books. A few of them have been taken now and two are now available. The first is Monitor Logan – basically a far future High Plains Drifter and this can be found in the World War Four anthologyfrom Zombie Pirate Publishing. 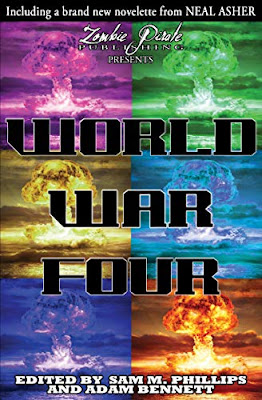 The second is Berserker Captain a story of sword-wielding violence appropriate for Ian Whates’ Legends Three from Newcon Press in homage of David Gemmell. 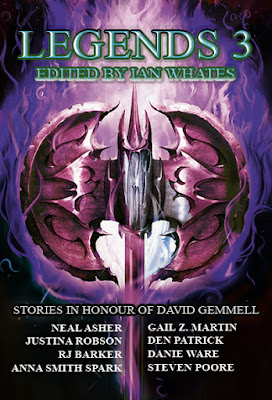 Some may have noticed, if they follow me on Facebook or Twitter, that I’ve been wandering into a few art galleries and museums lately. The blame for this can be laid squarely at the door of one Julie Ann McCartney, and she’s also to blame for a change in my usual morning reading of ten science articles. They now make way for two or three articles on art and history. I know that some are a little concerned about this change: Oh hell, is he getting all cultural and artsy? Is he going soft on us? Never fear. 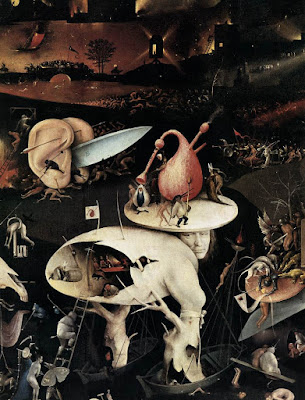 Right from when I was writing my first short autobiographies or answering interview questions, I told of how I chose to be a writer. When I was a kid I had interests in all sorts of things. These included biology, painting and drawing, electronics, sculpture, chemistry, writing of course and other things besides. However, in my early 20s (if not before) I decided I had to concentrate on just one of these if I was ever to achieve anything. If I did not I would be a Jack of all trades but master of none. I chose writing because in that I could incorporate all those other subjects. In the respect of my science and technology interest this was especially the case when it came to SF.

But all is grist to the writing mill in the end. I should also add that the mill needs feeding and often with something new. If you don’t feed it yes, sure, you can still produce but ideas might be lacking. And if you feed it the same old stuff all the time what comes out may well get stale. Please excuse the extended and increasingly contorted metaphor. But what I’m getting round to here is that new experiences, ideas and perspectives can be invigorating for a writer, and they have been.

As I said in previous posts I recently turned from writing novels to writing short stories (though am now back editing the latest novel). I started out with a fairly traditional alien contact story, got into some Polity biotech stuff that produced one story and germinated an idea for a novella. I then wrote another novella that concerned my recent reading on longevity and the new biotech start-ups we are seeing. Next I started writing a story about a woman with moveable tattoos that transformed into something strange about her skin having an implanted AI, and in this I found myself in the Polity art world.

Now I was really using those gallery and museum visits. That story completed I then had a seriously weird dream about a biotech future, sat to write that down before my morning visit to the gym while still in a bit of a dream state, and glanced at a book Julie bought for me for my birthday on the artist Hieronymus Bosch. It fit at once. This start has now turned into another weird one: far future biotech and the monsters of Bosch born to exact vengeance for a crime. I’ve completed that at 20,000 words and will finish editing it later.

Glad I visited those galleries.