Man in High Castle on Amazon

Another series I found on Amazon TV, which I have only just finished watching, is Man in High Castle. Based on the Philip K Dick book of the same name it gives us a parallel world in which the Nazis and the Japanese won the war. 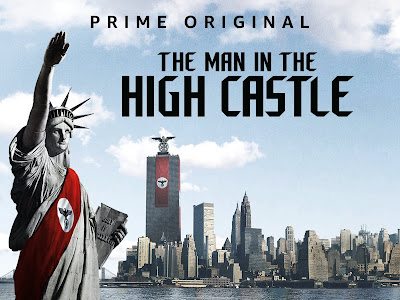 This is grim and bleak but the acting is good and the characters engage. Films are turning up in this parallel, from that Man in High Castle, of events in our own world and are disseminated by rebels, though it is never clear what effect they could possibly have. Maybe the knowledge that things could be different is enough? Mainly this covers the day to day lives of the people in that world – what it is like to live under such a regime – though the bones of story begin to appear with travellers from other worlds, the growing rebellion and the Nazi’s awareness of these and their response. However I wonder if it has the legs to go much beyond the three seasons shown. Mostly it is reliant on its world-building, of the shiver one feels seeing those black uniforms in places like New York, of swastika flags hanging on familiar buildings, and Japanese soldiers beheading citizens – the brutality of it all running on for decades beyond the war – and the frisson one feels seeing monsters like Himmler, Mengele and Hitler himself living on into the 60s. It relies in the end on it being a well-imagined parallel world, and that is not enough. I hope it does keep on its feet since it is very good, but I suspect is will die in the long whimper of extended franchise.

Posted by Neal Asher at 2:01 pm No comments: