As is usual I haven’t been blogging very much so time to catch up. Early last year I finished the first draft of the third book of the Rise of the Jain trilogy – provisionally titled The Human. Thereafter I thought it time to get down to writing some short stories. I used an extracted plot thread of 20,000 words with the intention of turning it into something short. It actually turned into a novel called Jack Four I completed to first draft on the 21st November. I then really did get down to working on some short stories – as with the books between spells of editing and writing other bits and pieces. 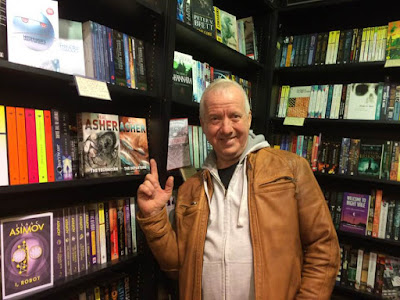 It’s been fun rediscovering my enjoyment of the tight writing and invention of short stories. In December I wrote a completely non-Polity near future story called An Alien on Crete. Shortly after that, in the same month I completed The Host – a Polity story involving weird alien biology and a forensic AI. I felt an idea in The Host could be expanded and did so, completing Moral Biology (a novella) in early January. My science reading has included a great deal about longevity, and I completed another novella called Longevity Averaging near the end of the month, then at the end of the month another Polity story called Skin, set in far future London and involving, well, skin. I’m now venturing off into something deeply biotech and weird, with links to the monsters of Hieronymus Bosch and guess I’ll have that done in a week or so.

But this interlude, enjoyable as it has been, must come to an end when I return to editing The Human ready to be handed in to Macmillan in a few months. One thing I rediscovered while writing these stories was just how good it is to print then damned things out to check them. I’ll do the same with the book going through it a chapter at a time with a pen. I also have in mind a small epilogue I need to add, so there’s that.

In all it has been a productive time and I’m happy to have returned to form. Ciao for now.