Everything I could do with the house and garden here is all but done now and it is time to turn my attention to writing (hence this blog as a warm-up), but there is still a problem here that’s nagging at me. Before I came out I heard from expats here that now everyone in Greece must register their house or houses. This typically Greek bureaucratic process has apparently not been too difficult for many people. However, I have a problem in that this house is still in both mine and Caroline’s names. Stelios, the guy who sold me the place, put me in the hands of another Stelios – an accountant in Makrigialos. I also had house taxes to pay for 3 years. The accountant sorted out my taxes and I paid them at the bank, but then I learned that taxes were also owing for Caroline as joint owner. This needed to be sorted. My shlep through Greek bureaucracy began.

First I needed to get Caroline’s tax number and details cancelled and ownership of the house passed to me. I needed her death certificate for this. I was sure I had a copy in the house but no. I got onto my neighbour in the UK who is looking after my house there. Heidi kindly searched my office to find a copy and posted it to me (it took 3 weeks to arrive). I also had to see a notary, apparently, to obtain a document saying Caroline had not registered a will on Crete. I went to see a notary, sat in the office for half an hour only to be told the notary would not come in today. I returned another day, waited half an hour while crowds of Greeks entered, left, argued and waved wads of paper at the secretary. Finally, I suggested I come back another day when it was less busy, only then to be told I must apply to the local court for this document. When I asked her where this was she didn’t know. In Makrigialos I learned that it was the Demos – a particular building that sits behind a coffee bar where I enjoy a frappe in Sitia. I went there and saw the building approaching dereliction. A few enquiries later put me in new government offices were a lady produced a form I needed to fill in. They were very helpful there but still the strange wrinkles of Greek bureaucracy impinged. To submit this request form I had first to venture off to a bookshop in Sitia to buy €5 of stamps. I returned with these, and after a struggle filled in the form and submitted it. The next day I collected two copies of the form saying there is no will. Victory!

Not so fast Neal. On returning to Stelios the accountant I learn that our taxes, because the lawyer we used when buying the house is located there, were in Heraklion. I must go there to cancel Caroline’s tax stuff. But of course it is now not so simple. The taxes are tangled up with ownership of the house, with the bank too (I cannot even get a cash card until this is sorted). ‘Proof of no will’ and a death certificate are not enough on Crete because unlike the UK, without a will the sole inheritor is NOT the spouse. It’s a tangle, it’s confusing. I finally asked Stelios to act as my agent in this (he will go to Heraklion for me) and he is now steadily grinding his way through it.

One upside is the house registration. I had heard that if you don’t get your house registered on time the government will seize it. This is all rather unlikely but still worrying. Registration had an end date just within the next few months. However, I have learned that this has to be extended because just here, in the Lasithi region, only 20% of houses have been registered and of them only 50% of the registrations have gone through. Another likelihood is that this whole registration process will fall apart over the next year. They’ve done stuff like this before and it has gone the same route.

So there we are – more or less up to date. I am sitting in a clean and tidy house as I type this. My front garden is neat, and only requires watering while I wait for some plants to get big enough to transplant. Another victory has been the chillies. I had no seeds stored and wanted to grow the multicoloured chillies here but could find none. I then remembered a long-time expat called Peter had them growing in his garden and he came up with about 30 of the buggers. The back garden and side border need some work, but I’m reluctant to set about it with my back still aching. The only jobs I have done there is clearance of the weeds and fitting a steel lid to a cess pit back there since, while I was weeding, the concrete block in the hole fell through when I stood on it. Fortunately the hole is not big and I only went up to my knee. No possibility of me drowning in shit – the pit was dry anyway.

Anything else? Well, today my aim was to write 2,000 words to get back into that groove. I’ve written a further 1,700 for this post and now it is time for me to open another file and make a start on a short story. I’ll then sort out photographs for this post, maybe do a few jobs outside, then, because the wind has died off now, head off for some kayaking.

I thoroughly enjoyed Children of Time by Adrian Tchaikovsky and (perks of the job) had an ARC of Children of Ruin to read. I dived straight in. The book starts with an Old Empire terraforming project in the past. For a while there I thought we were about to get a replay of the previous book and again looked at the brick of the thing and wondered if I might give up. I should have had more trust in the writer. 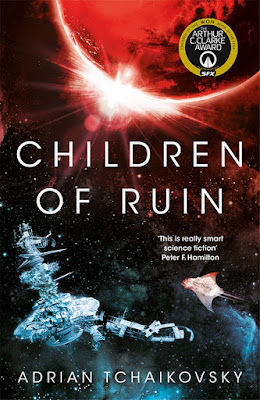 The ‘present’ timeline is set a couple of Human generations after the previous book with characters voyaging to a signal they had detected at the end of that book. The only remaining character is Kern – a human amalgamated with AI and subsequently copied to organic technology. But the portiids are there with all their enjoyable interplay, as are the humans.

Again I’m struggling here to review this without giving too much away, so I’ll get a bit general. It’s packed with excellent technology well-imagined from its sources, be they portiids, humans and some other creatures they find. The world-building is sometimes gobsmacking in that respect, but what is especially good is the detail of the thinking and communication of nominally alien creatures. The writing is easy and drags you in, and you know you’re in for a ride. About a third of the way in, however, I began to wonder how the narrative, enjoyable as it was, could be sustained with the story thus far. Adrian didn’t let me down, switching gear at about this point and accelerating with a plot twist (lightly signalled beforehand) that was horrifying, fascinating and truly alien. And this all slots neatly together for a suitably stonking ending. Reading the final section and epilogue was needed as a cool down.

I’ve had some trouble over recent years finding SF books that fully engage me and have often wondered if I’m just a bit jaded by it all. A problem with being a writer is reading something that doesn’t switch the editing head on and thus expel one from a book. This book thoroughly engaged me. Children of Ruin is a humdinger of a book I enjoyed immensely.