When the hot dry wind hits here is fries vegetation and heaps the detritus here and there around my garden. The leaves, flower petals and bougainvillea bracts haven’t had a chance to turn brown. It’s like someone has tipped out a few sack loads of potpourri. While clearing these up recently, ever wary of the odd concealed scorpion (though they’re not often about when it’s hot and dry) I found numerous crisp-dried sections of shed snakeskin. Judging by the size of these pieces the snake was three of four feet long. I wish I’d saved them for a photograph but they went in my composter with the potpourri. Only a few weeks after that wind did I pick up one small piece... 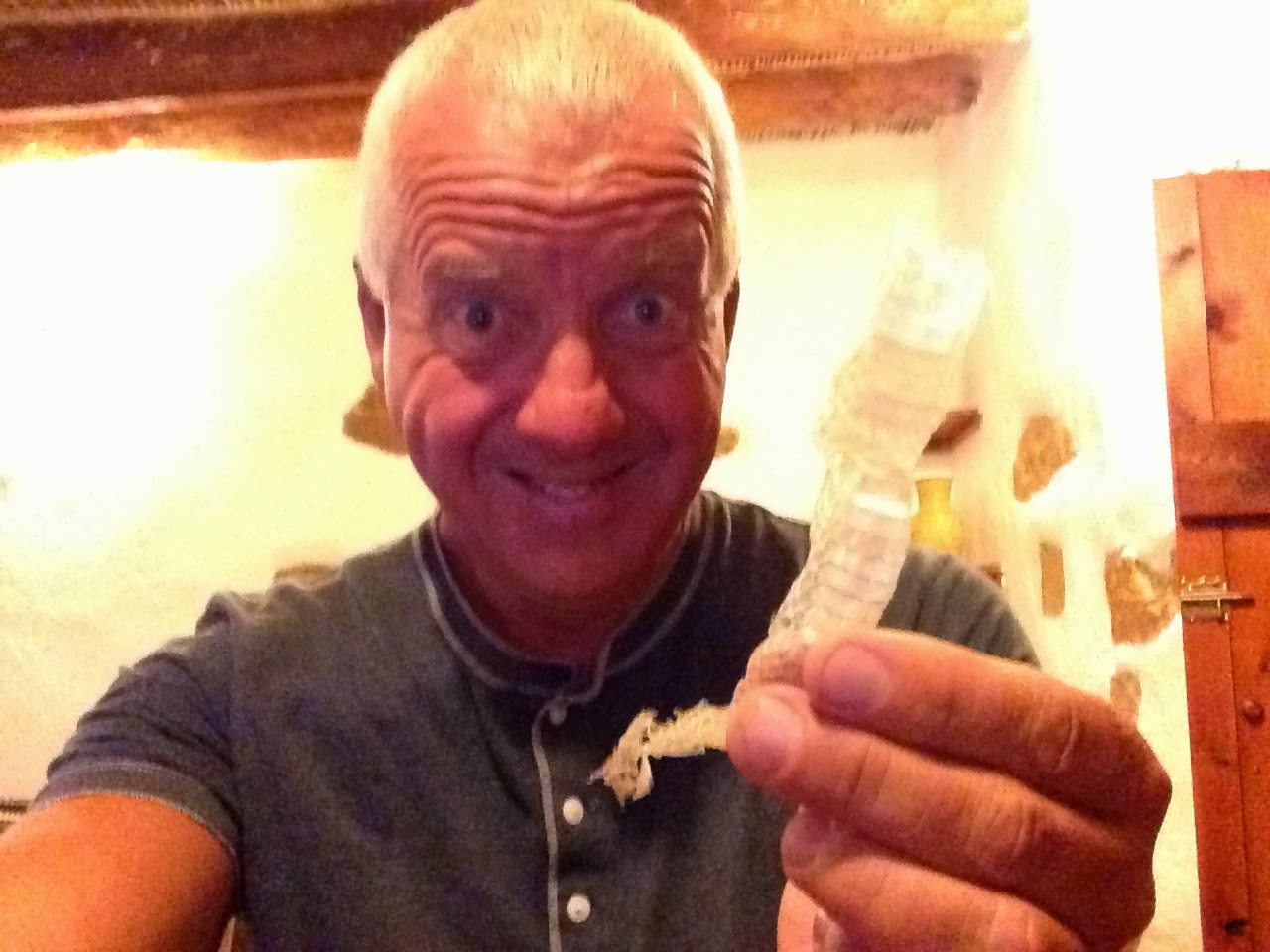 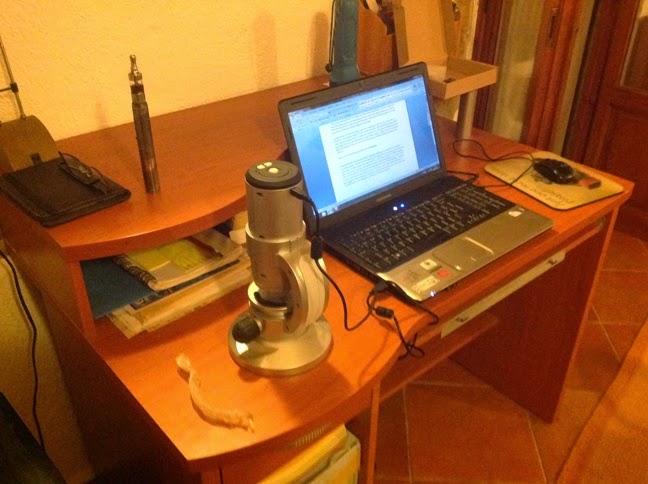 I don’t know whether this will be interesting – let’s find out.
Snakeskin x20 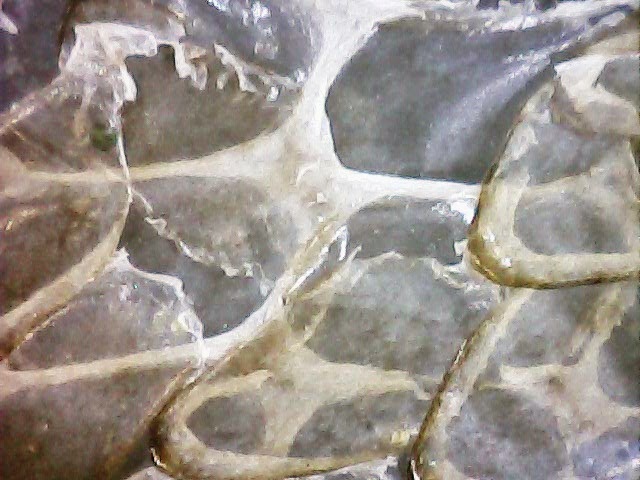 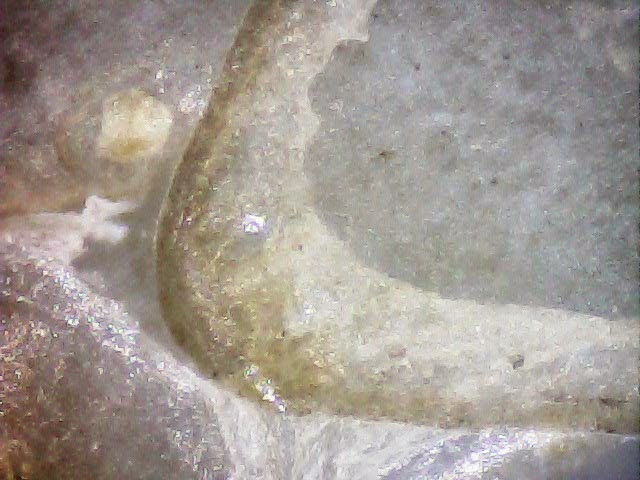 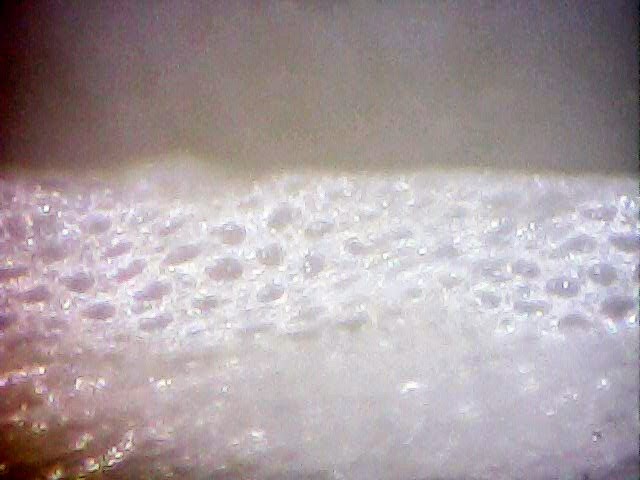 Okay, I did find these interesting, but then I have a confession to make: I’m a nerd. Also, coincidentally, when going back to editing these are the first words I read: He gazed at the snake drone locked in its clamps, and at the spine driven in through its mouth and deep into its body.
Posted by Neal Asher at 10:41 am 5 comments:


So, this morning I worked through another 50 pages of Factory Station Room 101. I found this easy going because there were large sections that I had enjoyed writing and, consequently, felt no need to alter much. Of course it being the dictum that on the editorial front one must kill ones babies you’d think I should attack these sections more, or that later editorial input would see them getting chopped up. This is not the case, because that dictum is crap.


This afternoon I went down to Makrigialos beach and, feeling slightly knackered, decided to forgo my usual ‘big swim’. Instead, I kayaked for a few miles, much of it against strong wind. This left me feeling even more knackered (duh!). After a coffee and a fruit juice I had a beer, didn’t enjoy it much. I ate something, tried another beer, and ended up tipping half of that into the flowerbed. At this point I realised (partly due to being knackered) I was jaded with all this – had hit a point of ennui. I packed up my stuff, headed home, dozed on the sofa then woke feeling refreshed. Next, I did some tidying up in the garden, then in the house, and now the washing machine is on. All these chores I enjoyed more than my time down at the beach today. 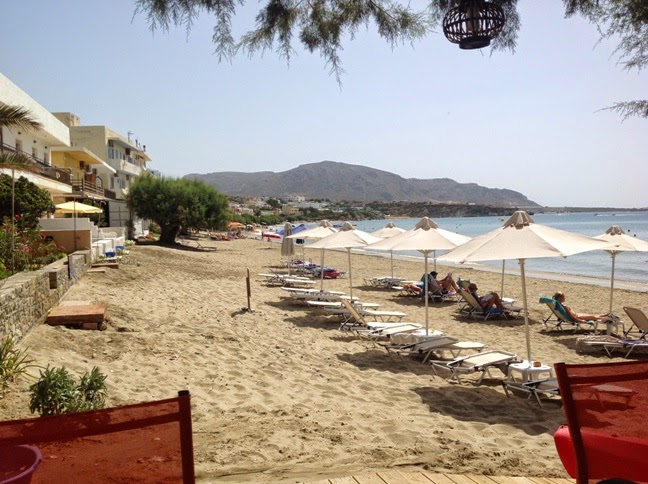 Here then is a truth many expats discover, usually a little while after burning their boats by selling their house in England, buying or renting here, and simply not having the cash to go back. Holidays are fun, but turn your entire life into a holiday and it soon starts to get boring. Unless you’re and alcoholic, or become one, booze has its limitations. Very few people will find interesting a career move into lying in the sun. In my case, half an hour on a sun bed is about my limit before I want to do something else – the only time I’ll stay longer is if I read something or fall asleep. Really, doing nothing stinks. 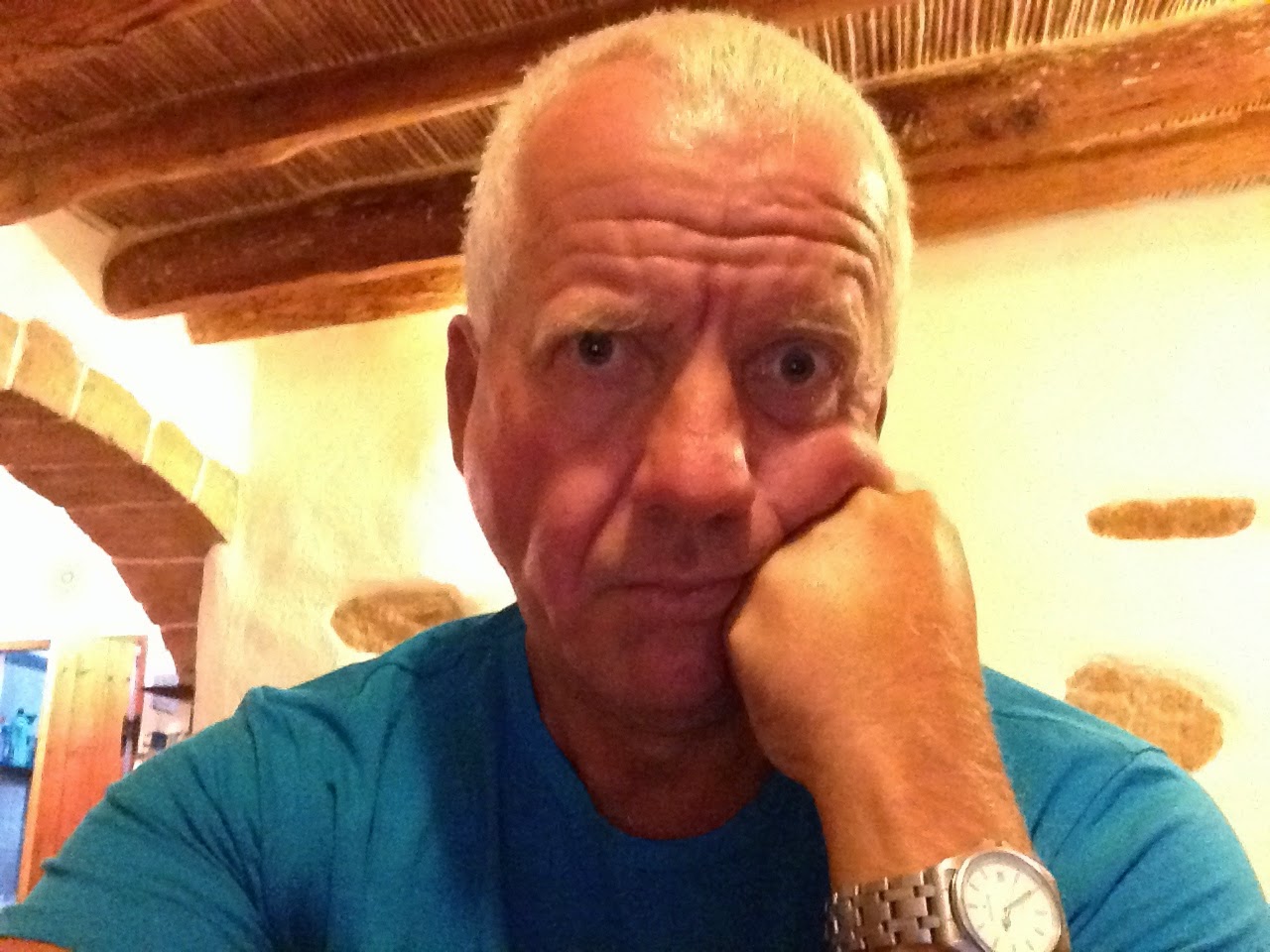 Luckily for me, or rather by design, I go back to England for half the year. I can work wherever I can recharge a laptop. I have a garden here and a fascination for growing stuff. I walk, kayak and swim. In fact, it is only this year that I’ve ever found myself getting bored. I guess that’s because I now have large chunks of time to spare – those a wife once occupied. But I’m in kick myself up the arse mode at the moment, and this feeling of boredom stops right now.


This is why the next blog post will be about snake skin...
Posted by Neal Asher at 10:19 am 4 comments:

So how much writing have I done lately? I’m ashamed to say not a lot at all. It’s not like I haven’t been active because, over the last few months, I’ve swum miles and kayaked miles and prior to that I walked for miles. 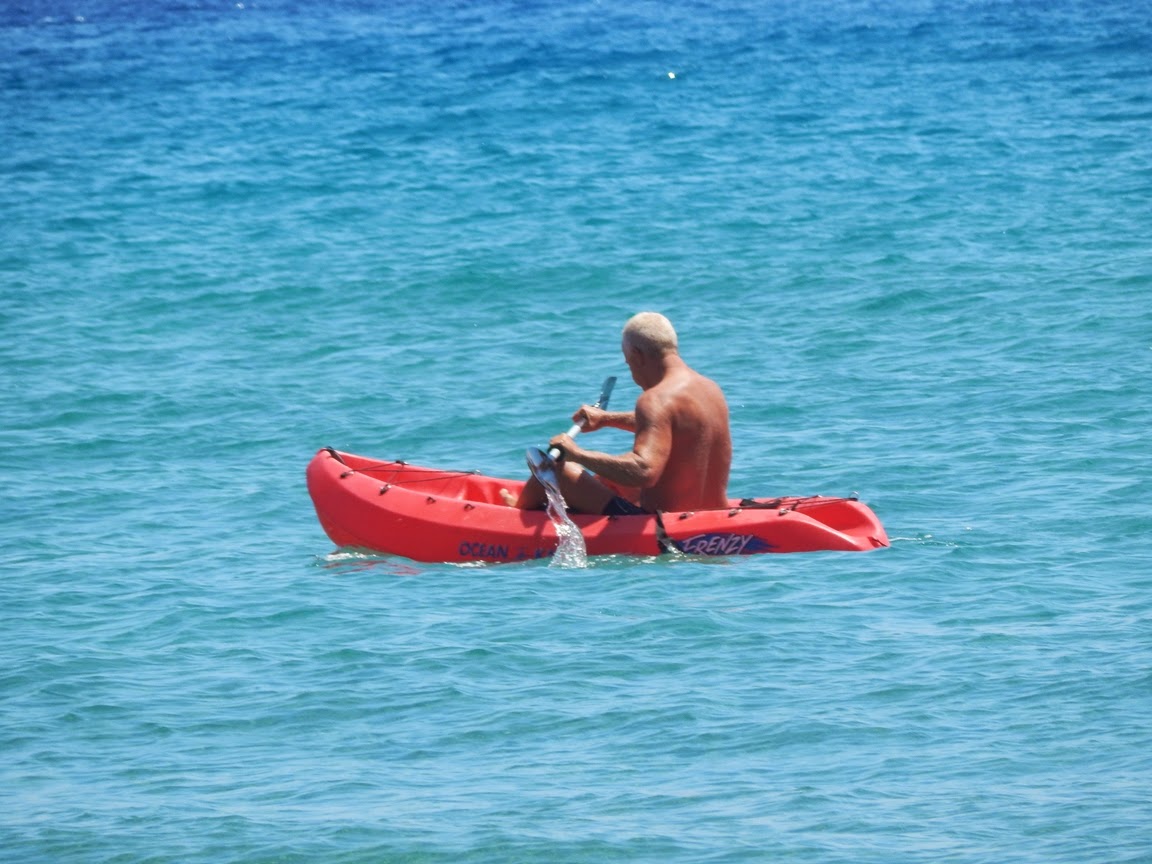 Now this seems to be a rather extreme version of that writerly cup of coffee – just another reason to get up from the desk and not do any writing. But as I’ve mentioned here before (I think) all this physical activity has been a way of shutting down my mind while writing, of course, tends make it a lot more active. So do I want to wake up now?

I think it’s time. As I write this it has been seven months since Caroline died. Certainly, that’s not been enough time for my mind to put itself back into order, but now I’m wondering if I should be proactive – force the issue, get back on the horse, slap myself into shape. The constant physical activity now seems a form of denial – a way of hiding from horrible reality. I have to impose some self-discipline.

Henceforth I am setting goals. A few weeks back I was again working through the second Penny Royal book – in a rather desultory way. I am now going work through 50 pages a day before I set out to knacker myself with kayaking and swimming. And I’m damned well going to write a blog for here at least every couple of days.

Okay, this blog has been gathering cobwebs while its blogger has been AWOL. I’ve just had my niece Samantha and her boyfriend Dean staying here for three weeks, but I can’t blame them for the lack of posts here. Nuts as they are. 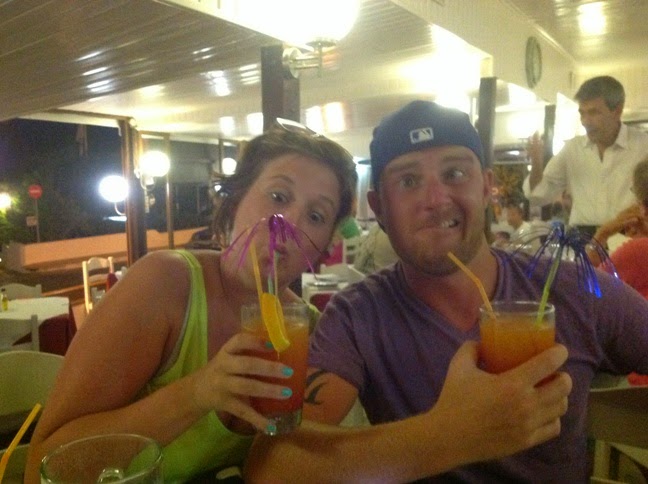 Anyway, what’s been happening? Well. A month or so back local builder Mikalis got round to sorting out the final leaking part of my roof. 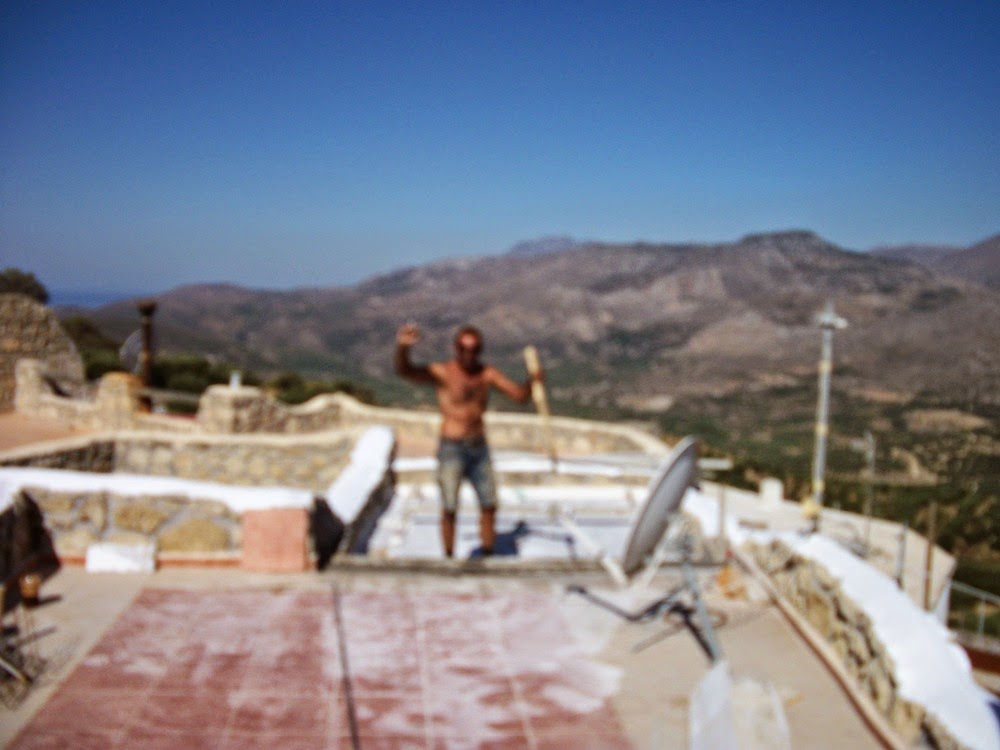 The roof consists of three concrete slabs at different levels. The steps between these were over two-foot thick internal stone walls, but the slabs had not been overlapped or joined in any way. They expanded and contracted independently creating cracks and then interesting water features inside the house when it rained. Mikalis’s answer to this was to rip out the accumulation of crappy repairs, expose the steel in each roof, bind it together with an earthquake cage, put specialised sealants down the sides and re-concrete the whole thing. 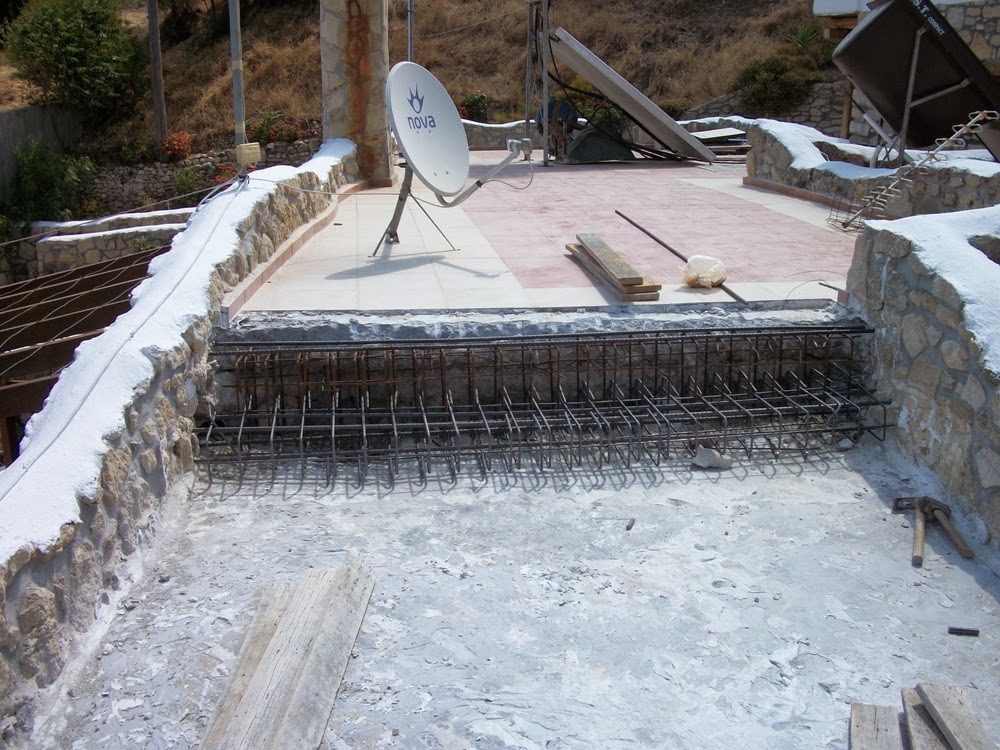 Of course, once he started ripping things up he soon exposed other work that needed doing. This particular roof was slanted so it drained onto a neighbour’s roof which, besides not being very neighbourly, was probably illegal. The tiling was also crap – the tiles up high on blobs of tile cement so water could get underneath them through the slightest crack or hole, which it had done. I told him to rip up all the tiles and redo the lot. 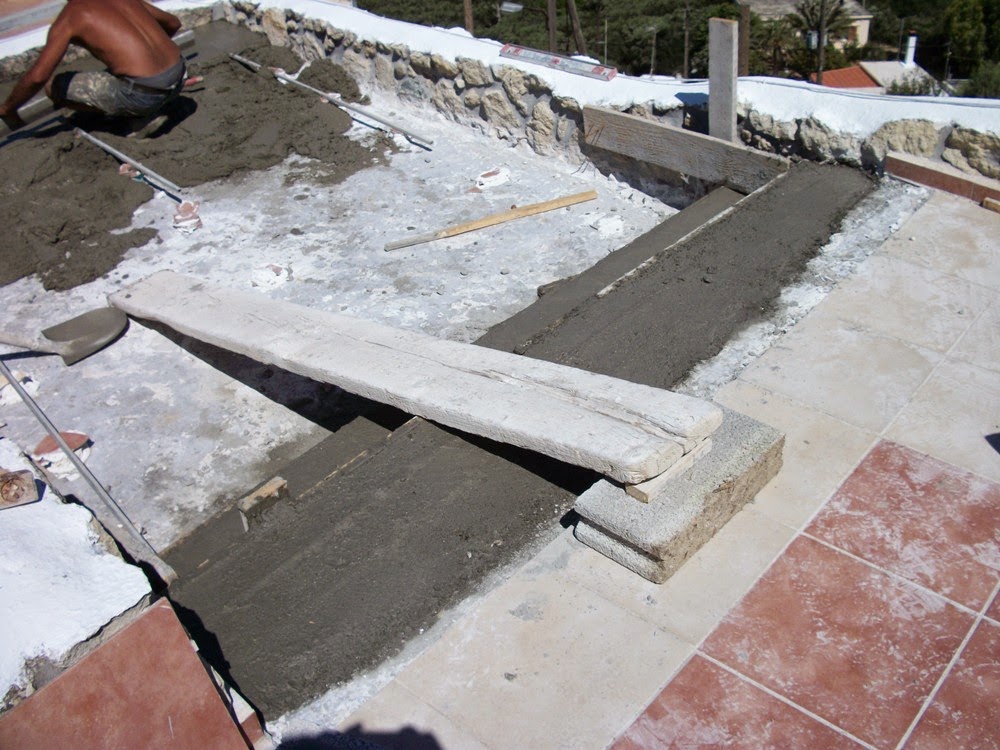 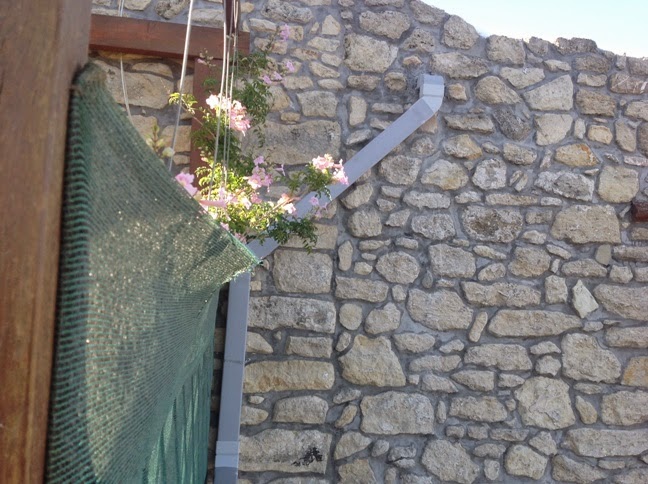 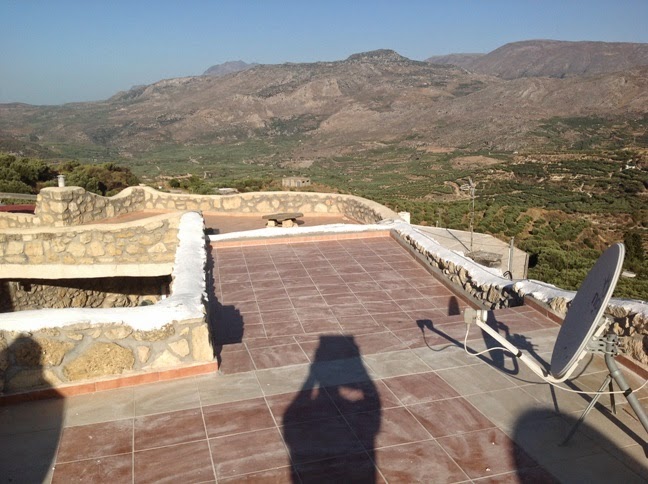 Mikalis had to spread a layer of concrete across the roof to change the slant, and make a hole in the wall to take a drainpipe. After all the concrete had set he painted it with another sealant, then laid new tiles. The final result doesn’t look much different from how it was before, but hopefully next year I won’t come back to see where water has been running down or soaking into the wall underneath.
Posted by Neal Asher at 10:00 am 1 comment:

The summer before last I pulled out yet another dead climbing plant from the pot on our terrace. I can’t even remember what it was, so lacking in any redeeming qualities was it. Caroline and I then went to a garden centre in Ierapetra and talked to the Dutch lady running it. She came up with a plant right for the climate of Papagianades, that shed its leaves in the winter so wouldn’t require watering and produced beautiful flowers. 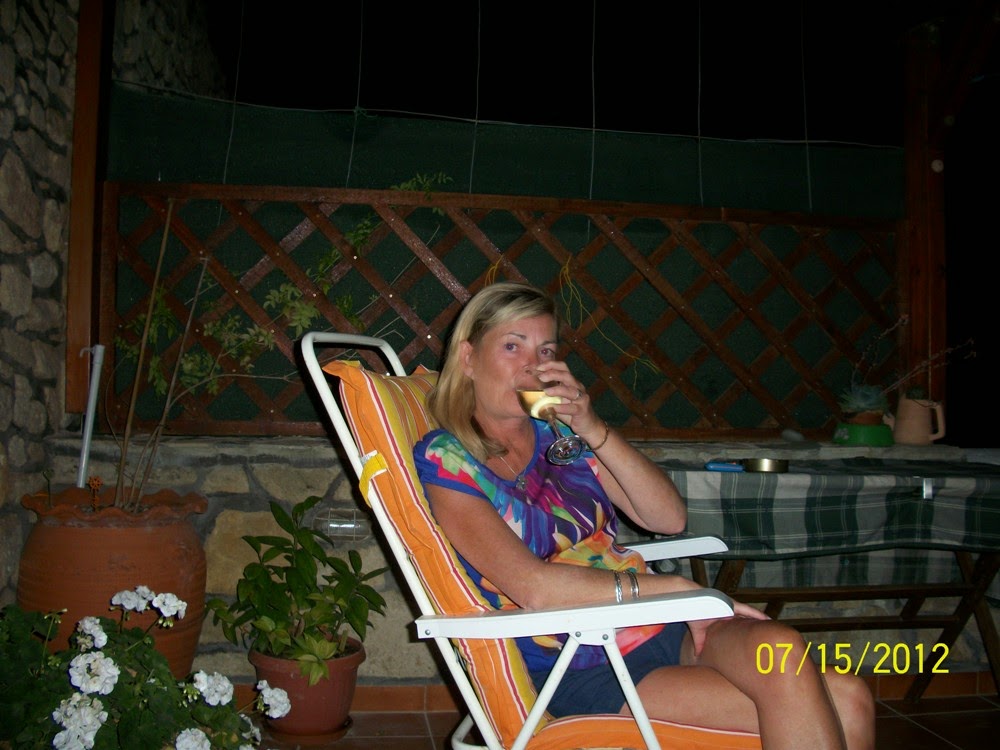 Last spring we watched it put out its first leaves of that year and spread up the trellis. But the thing flowered in August so we never got to see that, what with tumours and bowel cancer intervening. Now it is flowering. 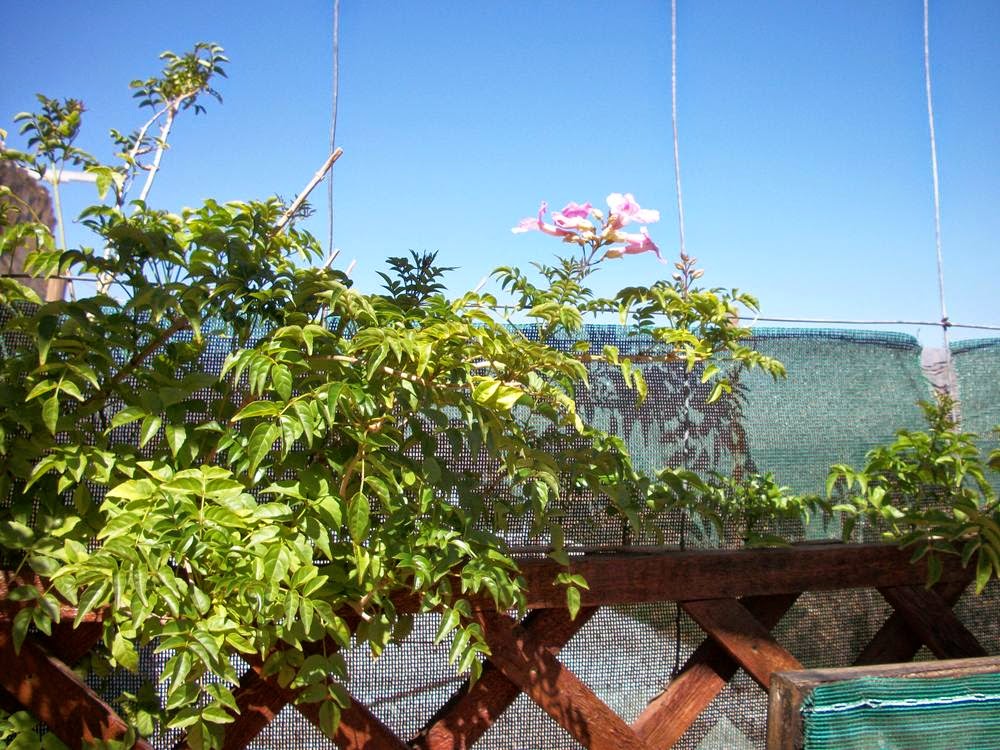 So, here are the flowers Caroline never got to see. I’ll keep the plant, even though I feel sad and angry every time I look at it. But life moves inexorably on...
Posted by Neal Asher at 10:30 am 6 comments:

Um, I’m noticing how many of my posts now begin with something along the lines of ‘I was in a bar the other day...’ but what the hell? I was in The Rock bar the other day either after or before my usual ‘big swim’ (this is about three-quarters of a mile, topped off to a mile with a few additional smaller swims) and feeling a bit bored, peevish, whatever. I can’t keep swimming for hours on end and lying in the sun or drinking beer, though enjoyable, have limited entertainment value. Anyway, Chris – co-owner of The Rock and the guy who took me gorge walking – said, ‘Why don’t you take the kayak out?’ 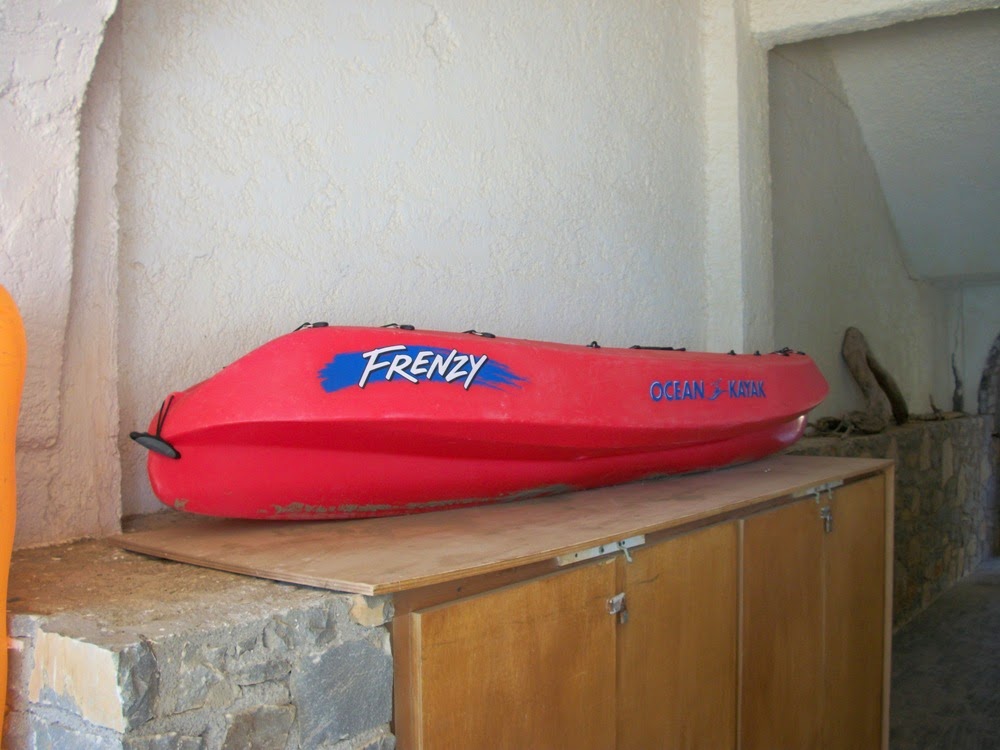 Pictures here are courtesy of Phil Toseland who, along with me, has the unfortunate honour of being a founder member of the Dead Wife’s Society. He too, a year before me, has been through the nightmare of watching his wife die. 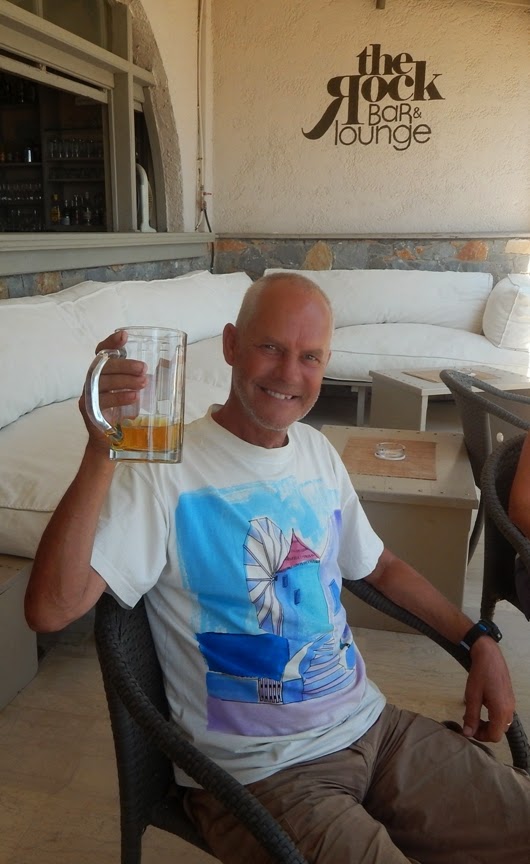 Chris and I got the thing down and after an hour of getting the hang of it I realised I was having fun. I took it out a couple of times that day and certainly felt the effects. My neck and upper back were very stiff for a couple of days. Since then I’ve been taking it out two or three times a day, pushing further every time. I’ve rowed to the harbour, round the point to have a beer in the Stratos restaurant, to the point on the other side of Makrigialos bay, but haven’t yet ventured round that to Diaskari beach. 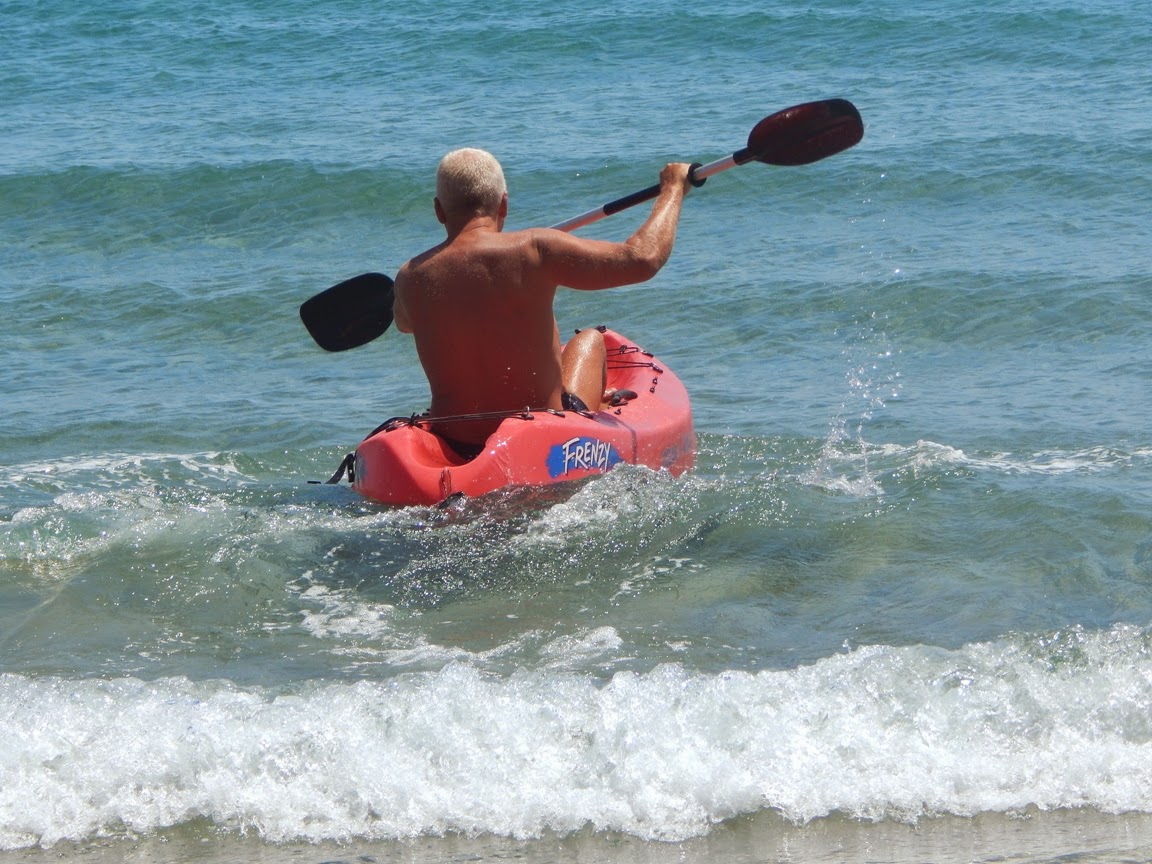 It can be said that I’ve travelled from Sitia to Ierapetra in the thing, just as I have with my swimming. When a Greek said to a tourist here that Chris swims between these two towns she was gob-smacked, until Chris’s wife Claire kindly pointed out that Makrigialos divided under the two authorities so what was being said was sort-of true. 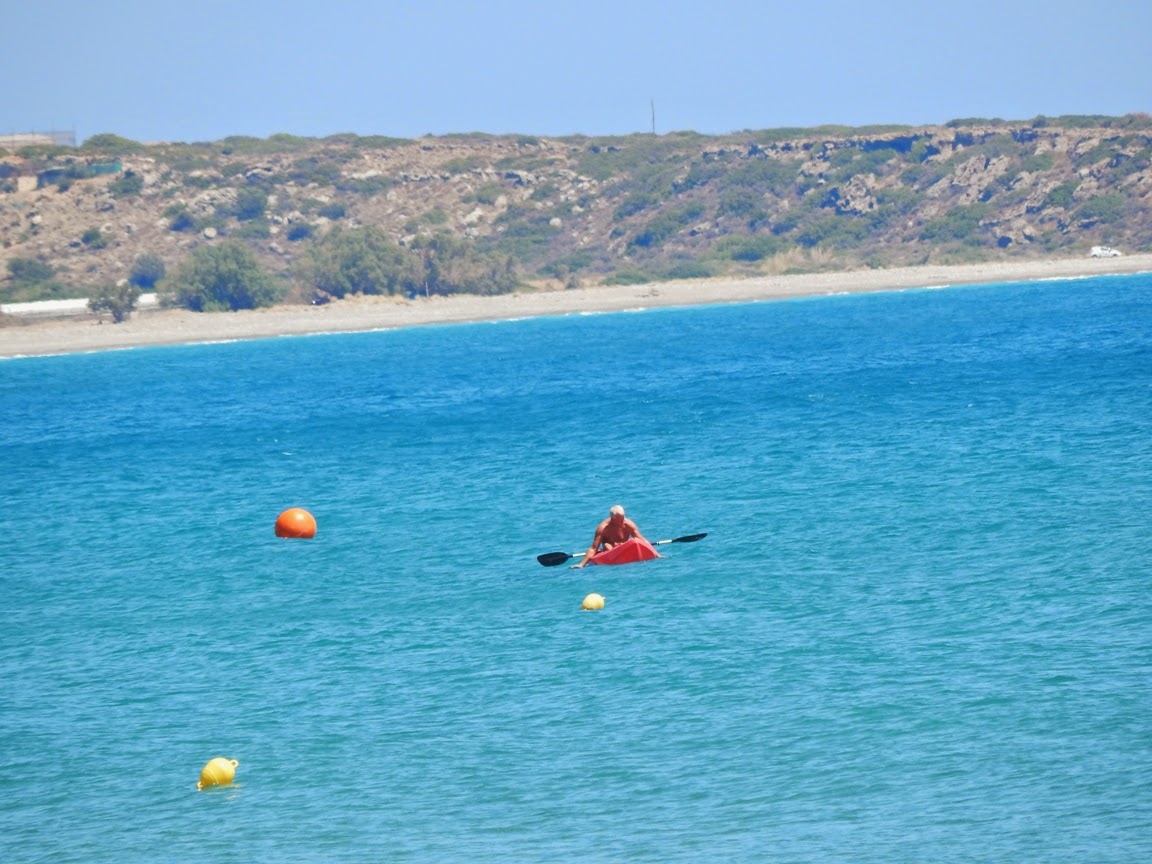 I’ve also acted as a water taxi taking a friend called Pauline for a spin. I’ve learned how critical it is to keep the kayak pointed nose in when beaching it while the sea is rough. Getting flipped over and having the kayak bounce off my head didn’t hurt much, but I certainly lost a lot of poser points. I’ve also tried one Eskimo roll and I won’t be trying it again. This ocean kayak is far too stable both the right way up and upside down. 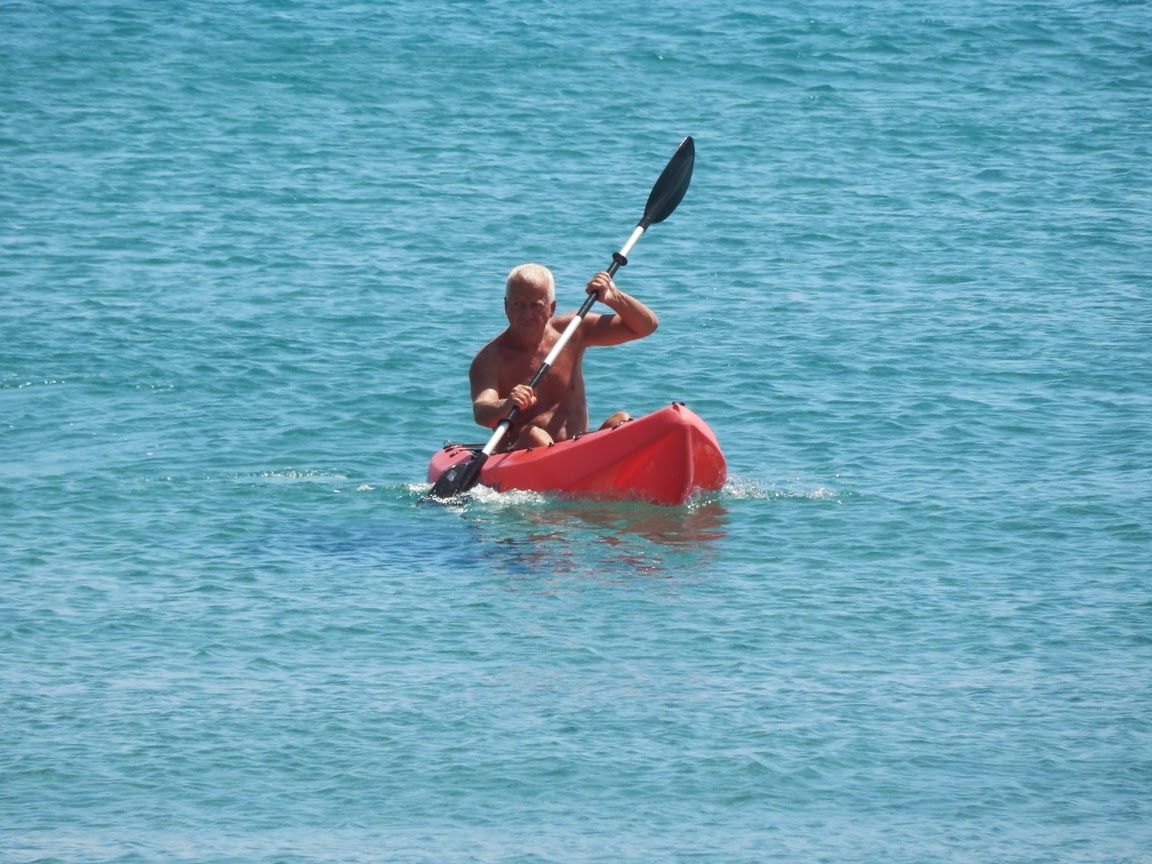 Because of all this extra exercise I’m finding that my usual blasé attitude to food is fading. I need fuel and my body is not shy of informing me of this fact. Muscle development must have been rapid, especially since I’ve continued with the swimming too, and my weight is climbing. I guess this will come as a relief to those who were worried I was going to disappear at some point in a small implosion.


In fact, I’ve been enjoying this so much I fully intend to buy one back in England and use it around the Essex coast and in the rivers there.
Posted by Neal Asher at 10:27 am 4 comments: