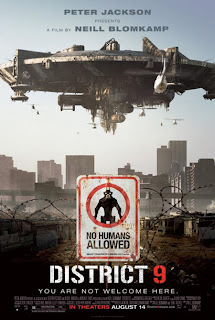 So I finally got round to watching District 9 last night. I did enjoy it, but with reservations. Yes, the way of presenting the story with news clips, segments from interviews and CCTV shots was interesting, but jarring at first – took a little getting used to. The aliens themselves were okay, but really, I’ve yet to see truly alien aliens anywhere other than the film of that name (and even they were a bit too anthropomorphic).
Some usual tropes and issues here. Why did the alien spaceship choose to park over ? Because characters speaking with an Afrikaans accent is sure to raise the spectre of racism, which was rather unsubtle. Admittedly Blomkamp was brave giving the ‘Nigerians’ such a bad guy role. And of course, the arch bad guys role has to be taken by the big corporation. Now where have I seen that before? Oh yeah, Avatar, all the Alien films, Blade Runner, Terminator (initially) – in fact, how often is it not the big evil corporation that’s ultimately to blame?
We had here a spin on the idea of giving beads to the natives in exchange for something more valuable, but that the beads were cans of cat-food and the natives were aliens just transported from a starship I found plain silly. Why were they starving? Here we have a race capable of zipping across the light-years in their starship, their whole technology based on biotech, yet they are incapable of feeding themselves?
I have to wonder how these aliens, starving and dying aboard their spaceship, were transported to the ground, without anyone noticing a large number of big fuck-off Men in Black guns, along with an enormous alien military exoskeleton. I also have to wonder why the alien spaceship, hanging in the sky on some sort of antigravity and empty of the prawns themselves, wasn’t crawling with reverse engineering experts, scientists, in fact some massive research effort. And I also have to wonder why the shuttle dropped to the ground and was concealed; why it didn’t stay where it was. Starvation again? So what were the father and son prawn going to eat during their at least a year and half journey back home? Maybe a scene was cut showing the shuttle packed with cans of cat food.
Suffice to say that we have some great scenes here – the action scenes are particularly good – but the whole, if you just think about it for a little while, doesn’t stand up to inspection.
Posted by Neal Asher at 12:39 pm

Shades of Alien Nation, but dirty and smelly, without an actual resolution. What is matey going to do for three years while he morphs into whatever?

In fact the human lead character was fairly shite all the way through, I just couldn't equate his character growing a pair big enough or getting his act together enough to pull off his stunt at the end.

This said, it did stimulate the ID and the grot was unexpected, the weapons were cool.

Maybe were are to surmise that there had been some disease in deep space that they couldn't get rid of so they needed to hole up on Earth for a bit and then just fell into decline (which when I checked on IMDB is exactly what happened, don’t remember it being mentioned in the film).

I needs a prequel and a sequel. There is a short, upon which this film was expanded upon, but I haven't had time to watch it yet.

And on a personal note, I think that Nigerians can do with all the bad press they can get, justified or not until as a nation they take onboard that the rest of the world dislikes intently.
1, Trying to rip off the Haiti appeal,

2, General Nigerian fraud scams (which to be fair you need to be a total bellend to be caught by).

3, Selling fake MCSEs to mugs who then end up getting jobs they shouldn't (who get caught on the background check) (see points 2 and 4).

4, Using fake IT qualifications to get jobs and then subsequently fucking those jobs up horribly... or better still doing fuck all while everyone else runs ragged, then pulling the race card when the games up and you terminate their contract.

5, killing children for being witches.

6, re-haggling a £30 fare they agreed to pay in the cab office two hours ago and then wanting the ride for a £10 at the destination having humped their shit all the way across London at 2 in the morning (some years ago mind you), and then having to lock the motor down with their stuff still on board to get aforementioned ALREADY hard haggled fare...

Feel free to delete this if it crosses a line

can answer a couple of your points, there, neal:

Some usual Hollywood tropes and issues here. Why did the alien spaceship choose to park over Johannesburg? Because characters speaking with an Afrikaans accent is sure to raise the spectre of racism, which was rather unsubtle.

being from S. Africa himself, blomkamp wanted to shoot in S. Africa because a. having the gritty slum-look for real was cheaper than recreating it and b. precisely because he was trying to draw parallels between the social situation from apartheid to that with the "prawns." he has mentioned it several times in interviews.

Why were they starving? Here we have a race capable of zipping across the light-years in their starship, their whole technology based on biotech, yet they are incapable of feeding themselves?

they were supposed to be refugees and worker-caste ones at that. it indicates later-on that the majority of the aliens on the ship were not able to work any of the complex machinery on the starship, and there was only one member of the "command crew" left (the one that gets away).

the aliens were supposed to have been taken out of the spaceship by the human, as for why nobody was cracking it open to reveal it's secrets, well that was one plothole, another is - why the hell didn't anyone check the spot under where the control module fell out - as it obviously didn't move - and they couldn't have covered it that fast (and even if it had it would have been very noticeable, surely?!

also reverse-engineering their weapons wouldn't have been too hard - even bio-keyed, it's not that tricky to use the plethora of genetic material they had available to concoct something to "fool" whatever sensors their weapons had. the idea of a fully-armed mech suit being left for nigerians to trade for, when the military would have been all over anything like that in the ship, is stretching credulity as well.

i thought the aliens were very well-done in general, quite different and more "alien" than the usual fare - the last shot of vickus really drives that home for me.

I did enjoy the film and did wonder whether all the Prawns where different species that had been altered as the main character had been.

Might have been a different spin on things. Still the weapons where good and I like the pseudo-documentary feel of it all.

You may enjoy the District 9 done in 60 seconds with Clowns instead of Aliens.

I agree with your points about the movie - I wasn't wow'ed, though it was an ok way to spend a few hours (I didn't think it lived up to the hype, though). I wouldn't have minded the documentary style if it had been more consistent through the whole move.

That said, and to be fair, the original short film was released years ago and (IIRC) was intended as more of a statement about conditions in SF than the Hollywood version. I *think* this is the original here http://www.youtube.com/watch?v=ZlgtbEdqVsk if you can trust my google search skillz.

Through the whole "movie". Not move. Bah.

I enjoy this one too,but of course the alien ship appearing over Jo'burg was a political statement,pointing out the pointlessness of racism! I thought the aliens were done ok,not too anthropomorphic,certainly better than anything Star Trek ever came up with! But to be truly alien is really difficult,even if you stay away from the 2 eyes,4 limbs body plan,and perhaps if they steer too far away from convention they worry they might put (non SF nuts) people off watching?

20 years later and there'd be nothing left of that ship

Why they were starving was quite simply that the food had gone out and their Queen was dead, she is the brains of the operation and without her most of them are "dumb-asses" or if you like workers. Like insects, you have work-ants, "warrior"-ants and queens. So, she died, they got all screwed up.

Next question, what the father and son would eat? Well if you just think about it a little, they did use another ship to get to the big ship. Maybe they have stored some food in that? One prawn and his tiny son dont need that much. There, problem solved. (plus they were counting on them being three, but one of them got killed. So yeay they have extra food to throw around!)

Next question, to be fair there is no point in SHOWING us the part of what they reverse engineer. Thats not critical to the story. Bottom line of this movie is the prawns are being treated like scum and used/abused for research and what not. And there is allot of political implements. If humans advance in other areas than weapons really isnt relevant. So maybe all that happened behind the scenes, maybe not, doesnt matter. Weapons is always the most important technology to steal (it brings you power over others) so that is naturally part of the story.

You watch a film turn, your brain off.

If you want to think read a book.

Hopefully LoveFilm will send me this soon so I can opine on the content.

@Larry
During the mech battle, he magnets up a pig and sends a guy through a wall with it.

Shoulda been a series of books, a movie (or two) just isn't enough to cover it

@Swainson, usually but not always! If you watch 2001,Moon or Solaris you need to be awake to appreciate it!
Not all films are brain rot, just most of them!

I enjoyed it. If nothing else at least it wasn't set in Los Angeles or New York.

District 10 is almost certainly on the cards with the success of the film.