M is for May and Morgan 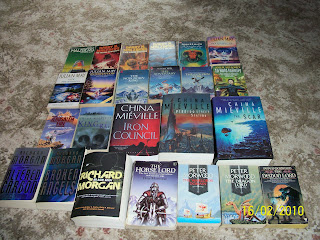 I wondered if anyone was going to say that. There's no Michael Moorcock because his books are a whole other post.

there ya go. i bet there is a passel of stuff you have that we in bibbleland arent privy to. im curious if 'The Golden Barge' made it into your keeper list. worst book....ever?

Mieville is a surprise. when you said 'soft sf' a while back i thought you were talking about him. i see so much potential from him, yet am dissapointed consistantly. teach 'em Neal!
or dont, he's pretty successful as the bookstore readworms are pushing his stuff with little gold stars and index blurbs on the shelf.

Yup, I've got a copy of The Golden Barge - American.

I enjoyed the Mieville books even though his politics started to infect Iron Council. Unlike other people I think The Scar was the best of them. Definitely keepers those since they're signed to me.

I think The Scar suffered from a damp squib of an ending (a pet peeve). The first time I read it, I finished feeling a bit disappointed. I actually enjoyed it far more in later readings, where I didn't have my expectations dashed.

morgan is excellent - his "black widow" stuff for marvel was a good read as well.

Jezcentral, I didn't have any expectations, which I guess is the best way to approach any form of entertainment. Can't remember the ending now.

Jebel, refer back to that previous bit about expectation. I found some of his later stuff less entertaining, at first, because of the powerful effect of Altered Carbon. But when I stepped back and thought about it a bit I realised that the later stuff was still streets ahead of much out there.

The Black Widow stuff was a graphic novel or something wasn't it?