Who Reads My Books? Daniel Ware. 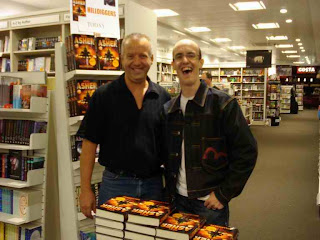 Ok so I finally got my thumb out of my bum and wrote something coherent (well almost) for you, Neal...

My name is Dan and I am 31 years old, married with a 2 1/2 year old son who I named Gaius after Gaius Baltar in new Battlestar Galactica (hopefully he won't grow up and destroy our society, though)

I am currently an Export Manager at a small fuel company, after doing stints working in IT for HSBC and then the MET/Essex Police as a project manager, before coming to my senses and getting out of the latter before the bureaucracy and political meddling drove me completely insane. I did actually come from a science background, my youthful obsession with dinosaurs turning into a Degree in Palaeobiology and Evolution after University, but sadly there are no jobs in hard science fields these days not already taken by entrenched minds and beings...

I guess I have my mother to thanks for my interest in Science Fiction - she is a big Alan Dean Foster fan - so I read a lot of his stuff from a young age (Cachalot and Sentenced to Prism being ones I remember). I never really left science fiction, though my continued interest in hard science meant most of my time was spent reading journals throughout my teens and 20s, so I dropped a lot of literature, coming back to it eventually several years ago.

I am also a keen gamer - rarely watching TV these days (since BSG went down the tube in season 3 I haven't watched anything except The Shield and the odd Fringe episode), but thankfully there are plenty of science fiction games to be had these days - Mass Effect 2 being a standout for any science fiction nut.

As for Neal's stuff, well I often looked at the cover of Line of Polity in my local Waterstones not long after it came out, but it was actually after I read Peter Hamilton's awesome Pandora's Star that I actually snatched up Gridlinked looking in desperation for something similar, and never looked back. Reading Gridlinked I was blown away by the quality of the writing and science fiction and I immediately went back and bought as many as I could in the same shop (including that copy of Line of Polity which I enjoyed even more).

After that, well there's no looking back I guess - found Neal's site, went to his signing in Lakeside (which he probably remembers as I dragged my wife and son along and we were the first ones there) and then went out for beers with the man himself at the next signing in London.

To date my favourite book is still probably Prador Moon, closely followed by all of the Polity series - it really defines how I think about science fiction now, the fact that I've met Neal and discussed it all in person is the absolute awesome sauce on top.

Well finally I guess, I do run a blog: http://jebelkrong.blogspot.com/ which focuses a lot on gaming, but I do post the occasional bit of Asher news and the odd review (but nothing like Walker of Worlds site, which is awesome, btw) - just something to keep me sane at work more than anything, but I like it!

If anyone games on XBL, my gamertag is, yep: Jebel Krong; and you will currently find me playing the hell out of Mass effect 2 most nights!

p.s. I can't submit a photo of my book collection because I still don't have a bookcase. I keep them all in boxes, as between kids and life, a nice bookcase is always at the bottom of the priority list... *sigh* maybe this year... 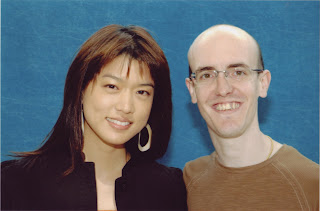 Ah another Alan Dean Foster reader! He remains one of my favourites! Icerigger is a great adventure!

He remains on my must buy list - but only if I see one of his books I haven't read, which ain't many. Try to get hold of 'Into The Out Of'. Very good.

I still rate Cachelot as one of my fave books of all time.

Wow! Dan's wife reminds me of Sharon in BSG

uh, yeah, that IS sharon (grace park) from BSG, as when my family are together i generally take all the photos, so - apart from our wedding ones - we don't have any others... something i really should rectify! (besides as you can see i don't photo well).

my mum is still a big ADF fan, i haven't read any of his stuff for years but it was a nice intro into sf.

Neal, I think I did read Into The Out of, a looong time ago tho-need a refresh on that one. Have you read all his Thranx/Pip and Flinx books? I hope to work my way thru them all this year(need way more than 365 days in a year you know!)

Dan got close to Boomer, the world will now suck until I get that same pleasure :)

Have not read any Foster I am afraid, I'll try 'Into The Out Of' now though after the my current Mieville and 'Terminal Word' by Alastair Reynolds, who happens to be one of my other favourite authors.

I doubt 'Into The Out Of' is available now. I'm not sure what Alan Dean Foster books are in print.

Incidentally Hitch: the mouse is an attack ship that needs to get close to its target to do sufficient damage, whilst the remote is a destroyer with a big fuck long range particle beam, maser, graser or laser.

Neal,re the ADFoster books. I'll look for it on Bookmooch.com,see if anyone has it on there(getting a Iain M Banks book from there,for free!)
Also Mr Foster informed me that the Icerigger trilogy is to be reissued ,maybe others too?

Right ... so he actually has an email link on his site.

I also note that many of his books are still available on Amazon, classics like Tar Aiym Krang and other excellent ones like Sentenced to Prism.

Of course you can see some of my favourites if you go back to 'F' in my book collection a number of posts ago.

Ah will have to look thru your archives Neal. Yea I have the Tar Aiym Krang(his first book,what an awful title!),its part of his Pip and Flinx strand and I have all the early ones-Bloodhype, The End of the Matter etc from the 70s and hope to go thru them all.

Neal: Glad to see we agree on the remote being the winner.

I was pondering what would happen if Jain tech came into play for both, how that would enhance the current abilities... but then it got far too long winded so I gave up with a chuckle.

Ah, yes. Alan Dean Foster was my first sci-fi author. Splinter Of The Mind's Eye was the title, most notable for being written before George Lucas decided that Luke Skywalker and Princess Leia were siblings, leading to some rather dodgy passages, in the light of events in Return Of The Jedi.

Neal I posted a comment on your 'F for 'Foster blog entry but it vanished!

Larry, the blog is set to notify me of comments on posts older than a couple of weeks. I don't check back there often and that helps me filter out the junk comments. Yours is on there now.