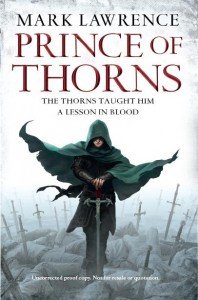 I can never find enough of the stuff I really enjoy reading – the science fiction and fantasy that really absorbs me. I make do with crime, police procedurals and the like, which are effectively nicotine patches when I want a rollie. Seeing a twitter about Harper Collins wanting reviewers for a new fantasy I thought I’d give it a go. No loss to me. I generally only review books I like because those I don’t like I simply abandon. I didn’t abandon this one.


Prince of Thorns by Mark Lawrence is the best fantasy read I’ve had since Alan Campbell’s Scar Night. It got hold of me from page one and didn’t let go until I finished it on my second reading session on the second day. There’s humour here, gut-wrenching realism, high adventure, something that might be magic in the story, and certainly is in the telling of it.

Jorg appears to be a fourteen-year-old psychopath. His approach to life reminds me of that scene in Troy where Bad Pitt, as Achilles, runs at the huge champion put forth by the opposing army and just kills him, and doesn’t look back as he approaches that army and demands, ‘Who next?’ Jorg is not a fighter; he’s a killer. No comfortable homey moralizing here, and the point that nice guys tend not to be the winners is driven home with a flanged mace. It was almost as if the shade of David Gemmell had returned, somewhat nastier for the experience.

Thoroughly recommended. Thanks Mr Lawrence.
Posted by Neal Asher at 8:55 am

Have you tried any of the Conn Iggulden historical fiction? I enjoyed the Genghis Khan series.
and the Roman ones as well.

I think I'd be disappointed if this is a "bad guy turns nice" story - I trust that is not the case? One for me to look out for this year.

Reading the review of the book made me jump to Amazon to get the book, only to find out that I can only get the book in eight months time.

That is indeed a long time to wait for a book, if I give you my address perhaps you could forward me the preview copy?

This looks really cool, can't wait for it to come out.