Here we go. Here's the finished cover of Zero Point: 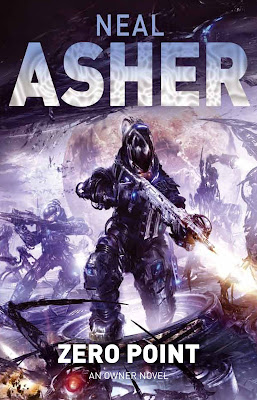 The billions of Zero Asset citizens of Earth are free from their sectors, free from the prospect of extermination from orbit, for Alan Saul has all but annihilated the Committee by dropping the Argus satellite laser network on it. The shepherds, spiderguns and razorbirds are somnolent, govnet is down and Inspectorate HQs are smoking craters. But power abhors a vacuum and, scrambling from the ruins, comes Serene Galahad. She must act before the remnants of Committee power are overrun by the masses. And she has the means.
Var Delex knows that Earth will eventually reach out to Antares Base and, because of her position under Chairman Messina, knows that the warship the Alexander is still available. An even more immediate problem is Argus Station hurtling towards the red planet, with whomever, or whatever trashed Earth still aboard. Var must maintain her grip on power and find a way for them all to survive.
As he firmly establishes his rule, Alan Saul delves into the secrets of Argus Station: the results of ghastly experiments in Humanoid Unit Development, a madman who may hold the keys to interstellar flight and research that might unlock eternity. But the agents of Earth are still determined to exact their vengeance, and the killing is not over...

PUBLISHED ON AUGUST 2ND.
Posted by Neal Asher at 10:43 am

Looking forward to reading this!

Go on, how long before it appears?

"Serene Galahad" - I love the names you come up, cant wait for the book.

Okay, I have the publication date which I'll also put up on the post: it's 2nd August.

Perfect! That's one day before my birthday - I can ask for it as a present, ha!

Lucky you, Pippa, to have a birthday during the summer. February, I tell you, is not a great time for birthday celebrations.

I'm falling behind! Not read The Departure yet and this is coming out soonish!

I'll be in California in summer, will it be out there or do I resort to shipping via amazon?

Please talk to your publishers Neal and emphasize the necessity to the idiot suits of coming up with, as you mentioned a week or so ago, a US publishing agreement. I'm sure i'm not the only one seriously fucking annoyed not to be able to purchase the departure, still, on Amazon.com or .ca. It simply boggles my mind that in this day and age...you get my drift...

arrgh...sorry, to further clarify, i meant electronically for the kindle...

I'll let you all know more about the American publication as and when I get some news about it. However, if the deal does go through:

"They would like to publish the first book in February 2013, following that up with Point Zero in May or June 2013, with the third one coming out simultaneously with our edition."

Thud - don't forget the Book Depository with its free shipping.

i think it's great no one dies in this one! everyone gets a fruit basket i can see from the cover.

this guy doesn't stop with the great art.

The plasma rifles and cannons, masers, lasers and railguns, not forgetting the assault rifles, missile launchers, EM pulse weapons, spiderguns, razorbirds and 'shredding mode' shepherds are all for display purposes, Vaude... oh, and the tactical nukes too, and the biochip generated plague...