And here's another one: 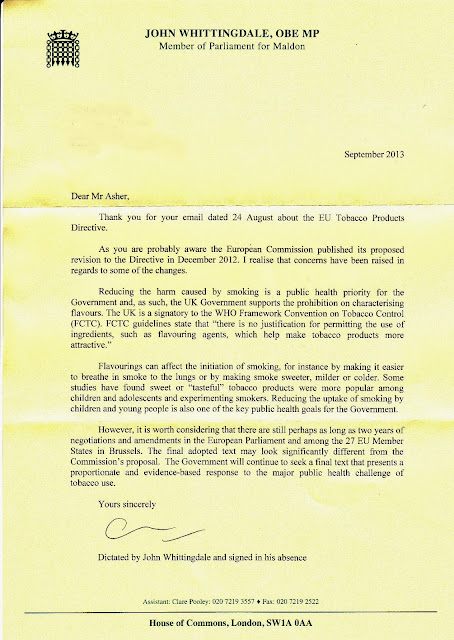 The MHRA itself has said that e-cigs and flavourings have not been shown to encourage children to vape, if they are going to smoke, they go for the real thing.

As an e-cig user for six years, I welcome regulation, it will mean that the 101 suppliers currently will go down to a handful of reputable companies.

Testing costs will not be in the 'billions' they will be around £250k in the first year with £50k to £100k per year after that.

If they ban flavours, I will just go to Tesco and buy food flavours.

"Licensing or ban?
I refer to pharmaceutical licensing as a ban, because it is. There are at least 5,000 products on the market now, the majority being refill variants. All will need to be removed from the market immediately licensing comes into force (within 21 days is the usual requirement). A license can only be applied to one product or product combination: a single hardware model, or a single liquid type/flavour, or a single device plus one liquid type. There is no possibility of a single license for several products. Each single product takes at least 3 years and at least £2m to achieve a license for (as that is what it has cost Intellicig in time and money to get their license so far, with no result as yet). Intellicig famously underestimated the cost and timescale, and have had to modify their time plan by a factor of 2 (initial estimate was <2 years), and their cost estimates by a factor of 20 (initial budget was £95,000). And it's not over yet."

Exactly my point, we don't need 5,000 products, 3 sizes of eGo battery, two variations on the cartomiser and we are away. Add in Intellicig, who I think are a brilliant company by the way, and we have the cigarette looking analog as well. OK, choice goes down the pan but what remains should work.

On the liquid side, pharma grade nicotine liquid and PG and then use food flavours already licensed for human use.

Mr Price is an alarmist, the end state will not be the wild west free for all it is now, but neither will it be a ban. The only people a ban would benefit is the tobacco lobby and the MHRA has recognised this.

Ncognito, I totally disagree. This will kill innovation, it is totally not needed, will annihilate a growing industry and will lead to people dying. Those 5,000 products include e-liquids and every combination will need a license. And it's not just the tobacco lobby that benefits but big pharma and all it's little buddies in our health services taking kick-backs. If you cannot see this as the shitty corrupt statist corporatism that it is then I envy your naivety.

Neal, could you please advice on this kit http://www.shopecigarette.co.uk/kangertech/e-smart-kit

The Mini Pro Tank that you have is out of stock and I am confused about all the alternatives.
Many thanks.

How's the non smoking going? How much nicotine do you actually consume in a day? More or less than with cigarettes?

Just dipped into your blog after over a year. It fell foul of the company internet filters abd I tend not to have the laptop on at home if I can help out. however on holiday in Rhodes and the Greek island connection triggered me to look you up and discovered it was easy enough via the wonderful Samsung S4 work generously provided me recently (actually the second one, after I irresponsibly "lost" the first one). Funny how the mind works.
Can't even say I've bought a book of yours recently either, currently ploughing through all the dune novels. Which is very rewarding, I'm sure I'll read you again, I always enjoy your stuff.

Add far as the e-cig debate goes, it's certainly an interesting one. I stopped around five years ago, cold turkey. Although I do occasionally fall off the wagon, most recently on a stag weekend in Barcelona which also happened to be where my last phone was "stolen". So I'm far from being ask self righteous and evangelical about the whole issue. I still love cigarettes!
The Lancet's a good journal to keep an eye on regarding the issue, as is the new England journal. It seems that doctors are worried about years of smoking uptake reduction bring reversed by normalizing smoking behavior, but worried not shouting for bans as the politicians are. Other key commentary is that no-one is not completely harmless, there's definite links to endothelial dysfunction, a known precursor to coronary artery disease but of course they don't have a lot of evidence to say if nicotine without all the other stuff in cigarettes is still a major risk factor. The instinctive thinking is that it's not but most scientists and dubious want a bit more solid evidence to back up those gut instincts. Further research is key but who wants to pay for it? If the delivery systems get classified as medical devices that still won't get the kind of large epidemiological studies that need doing, done. It would put the whole technology back a few years and the current manufacturers wouldn't have the expertise to get them licensed. I work in the medical device industry, specifically in clinical trials so find the debate quite interesting. Personally I think the research needs to get done and soon and in this case, with such a large population of active users it would be a very responsible government which took on the role of researcher.

Cris, there are other shops where you can get the mini protank. But this is where I'm at now: I'm using this battery since the variable voltage enables you to get the hit you want: http://www.vaperone.co.uk/vision_vv_spinner_1100mah_batteries/p1365275_6439625.aspx

You will also need a charger for the battery. The USB charger cord alone or with the mains adapter: http://www.vaperone.co.uk/chargers/cat1365276_1235904.aspx

These are just on one site, though there are many others. Also many choices of e-liquid to use. You should also check out You Tube vids on maintenance of these things.

Marcus, I know of and have heard of no-one who has gone from being a non-smoker to smoking an e-cig. I'd be prepared to bet that 99% those who use them are smokers looking for a way out or a way to get their hit without the risk. Smoking uptake reduction has been small despite all the bans and denormalization. Meanwhile, in just a few years, 1.3 million smokers have moved onto e-cigs in Britain. I know that I alone am responsible for at least 10 of them! It strikes me that the anti-smokers only care about a complete ban and smoking being 'bad' facilitates that. They're not interested in harm reduction and rather resent that a problem is being solved DESPITE them.

Thanks very much Neal, I will do some more research.