How about this for a bit of totalitarianism from the EU? This is from the Tobacco Products Directive and part of the stifling regulations they propose to bring into law.

5. Member States shall ensure that:

a) Commercial communications with the aim or direct or indirect effect of promoting electronic cigarettes and refill containers are prohibited in information society services as defined in Article 1(2) of Directive 98/48/EC, in the press and other printed publications, with the exception of publications that are intended exclusively for professionals in the trade of the products and for publications which are printed and published in third countries, where those publications are not principally intended for the European Union market;

b)Commercial communications with the aim or direct or indirect effect of promoting electronic cigarettes and refill containers are prohibited in the radio;

c)Any form of public or private contribution to radio programmes with the aim or direct or indirect effect of promoting electronic cigarettes and refill containers is prohibited;

d) Any form of public or private contribution to any event, activity or individual with the aim or direct or indirect effect of promoting electronic cigarettes and refill containers and involving or taking place in several Member States or otherwise having cross-border effects is prohibited;

You would think this is about something bad for you, like cigarettes, rather than about something that has allowed 7 million people across Europe to either quit smoking or cut down on their smoking. Do you see what the above means? A health revolution akin to the invention of the Polio vaccine must not be advertised, anywhere.

If you, as an individual, have given up smoking by using an ecig you are not allowed to talk about it on radio, on the TV or in the newspapers, or here on the Internet. All the media – newspapers, TV, radio, Internet – is to be gagged because if anyone in them talks about ecigs in any other terms than them being the product of Satan that will be the ‘direct or indirect effect of promoting electronic cigarettes’. The ‘cross-border effect’ can be ignored, since newspapers, TV, radio & Internet cross all borders. In fact most of the posts I have on this blog concerning ecigs will be prohibited. Meetings of ecig enthusiasts will be banned and ecig fairs will be prohibited, since just one tweet would make it ‘cross-border’.

Welcome to the future as it increasingly looks like The Departure.

Here's my Vamo which I recommend to anyone who wants to try quitting smoking. 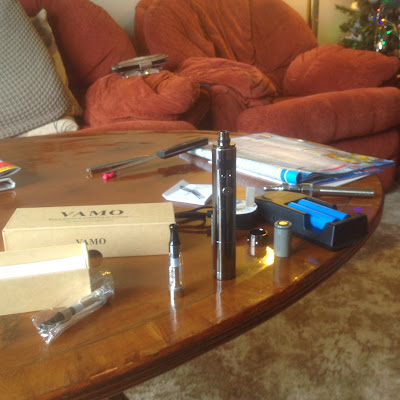 It buggers belief that a product which has stopped me from being a 20-30 a day smoker (filtered not even rollies) can be villified by idiots without any idea about what an ecig is.

Nevermind the fact that i have a sense of smell again (i havnt for years) my bank balance is so much better off £2 a week on my addiction rather than £12 a day, they must be shitting them selves at the loss of tax revenue, so rather than persecute multi nationals dodging there taxes or bringing legislation that actually persecutes the assholes responsible for so many of worlds evils, because you know banks are untouchable. They seek to persecute people who wish to be healthier, more socially acceptable thanks to the draconian nanny state laws that not only forced me out into the cold to smoke but destroyed many fine independant pubs and restraunts and in many rural areas deprived villages of there former community hubs, way to go big society. And in times of austerity a viable option to allow people to make huge annual savings by (certainly in my case) avoiding being taxed to fund other peoples fuck ups.

meh what a load of bollocks, just because the tobacco and i suspect more so the pharmaceuticals fear a loss of profits, whilst the govt fear a loss of tax and duty.

Until they put none of the above as vote i can cast, which doesn't count as a spoiled paper (so counts towards which ever buch of assholes has the majority vote) i dont live in a democracy.

Quit 3 days ago after reading about it here :)

The ban on 'old' media is pretty much redundant for a large part of the population anyways. With the internet still being pretty much a freehaven for information you can find a lot of info about it.
Still there isn't as much information on long term effects to be found as I'd hoped.
Nicotine is still an very scary word, and other forms of intake should be looked upon with a certain kind of scepticism. Certainly because a lot of e-cigs here in Holland come in various flavours (Cola, bubblegum, straberry) which seems to have an appeal to children. I know a few non-smoking teenager who have vaped.

Still, I think the e-cigs can be a good way to stop for some people. Marketing them for that purpose (medical product) should not be banned imo.