So, if you wanted to see a picture of space battle scenes from the Cormac books, which ones would they be? Maybe Dragon hammering into Hubris in Gridlinked? The Occam Razor destroying cylinder worlds over Masada in The Line of Polity? Jack Ketch 'shitting laser beams' in Brass Man? Battle Wagon charging Erebus's formation in Polity Agent? Orlandine directing a black hole matter fountain in Line War? What do you think? 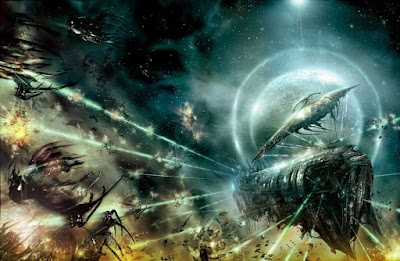 Classical problem of too much choices.
"The Technician" was first book I read from you and closest to me.
Even the basic view of planets eaten away surface would do!
Anything will do! :)

Any look at Dragon that's not just a sphere would be a sight to behold. I would absolutely love to see an artist's depiction of Dragon impacting on the surface of Masada. Or A view of the the Pseudopods invading a Polity ship. Or a view of some of Dragon's insides where vast, metal ribs were described.

Yes. Okay if I have to pick just one I have to go with Occam Razor destroying cylinder worlds.

Spoiler warming for anyone who's not read Line Of Polity.

I'd love to see art of cormac frying Skellor in the occams razor with the mirror array around Massada! Toasty.

In my own stories I've pointed out that actual space battles would be almost incredibly boring, with fighting - if any at all takes place - over enormous distances, using cloaking technology, and that lasers would be utterly useless except as short range missile defence (the inverse square law takes care of that). Apart from which lasers are invisible in space and can be defeated by a mirror.

There's a reason why no good, realistic paintings of dreadnought combat exist; the ship's could hardly see each other except as dots on the horizon. And that would be sniffing range compared to the nearest space battle.

Any of Jack Ketch's "family problems", I think. Smaller scale, but intense.

The battle at the graveyard, when penny royale is protecting the city.. Or perhaps the runcible thing at the end of Prador Moon.