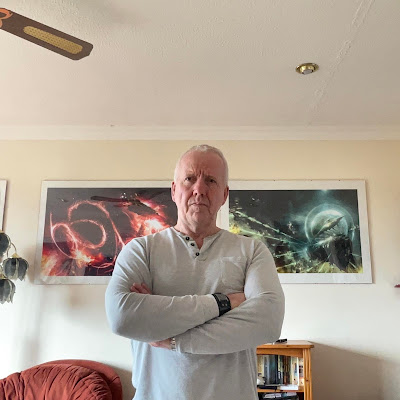 Between my school years and my early twenties I was coming to decisions about what to do with my life – where to apply my effort. I’ve mentioned in interviews how I focused on writing because it could incorporate many of my other interests. All knowledge is useful when your vocation is describing the world and its people. Though that world might be a fantastical or science fictional one, there are truths about the way ecologies work, physics works, science works, how people behave and more besides. Once asked what I thought was one of the most important factors in writing my answer was: the truth. In writing I could eclectically select from my other interests and apply them.

What I haven’t mentioned before is how I put aside one of my interests: art. I was good at drawing and painting and felt that with sufficient effort I could become very good at it. But what is the measure of success in this enterprise? Money is one measure, personal satisfaction is another, but at the time I looked to the art world to see what was lauded and what did I find? I found daubs that looked like the products of snails dipped in variously coloured paints and dropped on a canvas. I found sculptures that looked like interpretations of the world from a five year old. And I found a pile of bricks sitting in the Tate gallery. No, art was not for me, because the systems of measure of excellence were fucked up and had been for a long time.

I remember the feeling of disappointment; of an option closed down by gatekeepers who seemed to have lost all grip on reality. Now I wonder about the many girls and young women, physically competent and excelling at sports, who push themselves to do better and into competition. Are many of them now feeling the same when they look to the future of something they want to turn into a vocation? Do they get that sinking feeling of disappointment seeing the option, the course, and the final goals closed down by a silly ideology that puts them on the track, or in the swimming pool, or whatever physical sport they want to pursue, with a man? Are they reconsidering their futures?

The ideologues of the left talk much about colonization and, as ever, they are accusing those who oppose them (basically anyone who isn’t them) of the sin they commit. While in the process of supposedly ‘decolonizing’, their ideology has colonized the arts and humanities, the media, governments and schools, and it’s now colonizing the sciences and the sport’s world. It’s a virus – spreading from the organs originally infected to destroy others too. It does not assess whether what is destroys is good or bad, and offers no rational replacement for the same. Except, of course, for the wonderful utopia it purports to be ushering in.

It is amazing how such a small minority can sway/drive culture into irrational, bizarre alternative realities. I don’t know a lot of people but I know no one who knows anyone who believes in their weird, nonsensical thinking. It makes you laugh when you read and see it, but the reality for many who have to live in their freakazoid world is impossible to comprehend. It demonstrates how humanity has been lead down dangerous paths in the past. Mind blowing.

Do yourself a favor and stay away from American politicized sites. Nothing but a bunch of dumbasses in there.

Frankly if you ask people (left or right) WHY they give a rat's ass about most of this crap they will not be able to answer cogently, resorting to insulting the other side.

Not sure how things are in the UK, but here in the US seems like nobody really gives a shit about Covid anymore. Life is more or less back to normal in many cases. If you have your jabs whatever. Seems like most restrictions are pretty much lifted, aside from masking on planes... which honestly they probably should have been doing long before Covid appeared.

I'm accountant & I have a course session pretty much thought through for fine arts courses roughly entitled "Don't expect to make a living from Art". Sad, because I think a lot of artists assume they can (especially in places like Pembrokeshire). But the economics just don't work except for a tiny minority (who as you say may not be being judged on actual art anyway).

It's probably not quite the same for writers because (a) they usually seem to start from other jobs, (b) the work takes longer and can perhaps be commercially assessed more clearly, (c) by and large they aren't spending their student loan on a "how to be an author" course.

Mr. Asher, whatever happened to Rho, Gene and the Atheter G-duck in your Alien Archeology story?! It would be fun to find out! Thanks.

Hello Neal. I just wanted to let you know I'm reading Jack Four and it's been a really enjoyable book. I've read every Polity novel and short story I can find, and there's something truly wondrous about this massive universe you've crafted. Thanks for many hours of engaging entertainment. I hope you enjoy writing them, because I look forward to following your work for as long as you produce it.